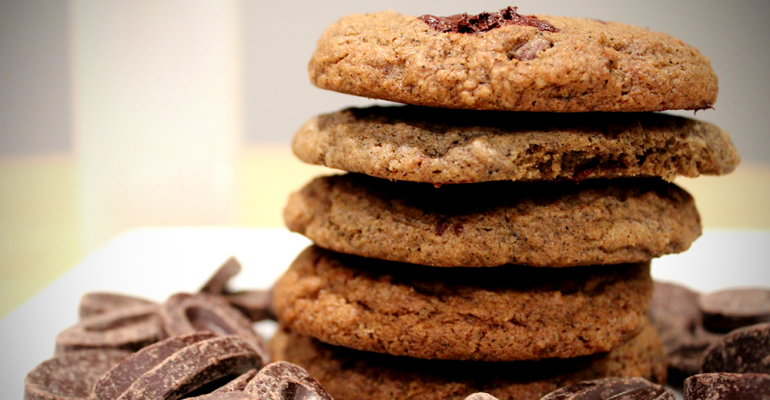 Diners’ long-time love affair with chocolate is only getting more intense, in desserts that are surprising, sustainable and just simply volcanic.

Mocha-java cookies
Northeastern University, Boston
These tempting cookies (pictured above) were the star at recent zero-waste event at Northeastern. In addition to being chocolatey with a welcome jolt of coffee flavor, Executive Chef Tom Barton created these cookies as a statement in sustainability: They’re made with spent coffee grounds from brewed coffees on campus.

Molten lava cakes
Corporate, healthcare and university Sodexo accounts
Until recent times, molten lava cake was widely regarded as hopelessly old fashioned and almost a menu cliché. But the power of gooey, melted chocolate (thankfully) prevailed, and molten chocolate cake is exploding onto menus once again, as seen in his option (above) that is available in deluxe and budget versions for Sodexo accounts. 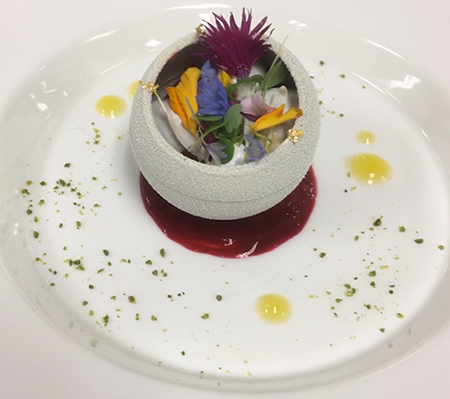 White chocolate-dusted sphere with yuzu parfait, matcha cake and wasabi meringue
Vancouver Convention Center, Centerplate
This spectacular new dessert (left) makes its debut in February at a big show at the Vancouver Convention Center. As intricate as it is, the white chocolate sphere will be done for 1,500 guests. The sphere is composed of two halves of a white chocolate dome fused together, cut at an angle, then sprayed with white cocoa butter solution to achieve a velvet texture.