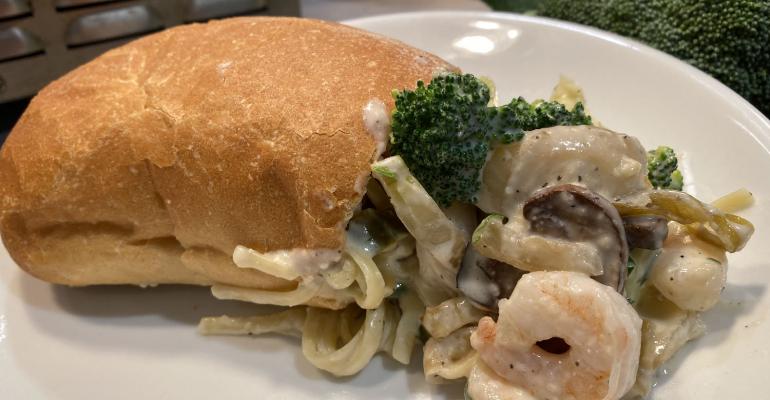 Chef Mike Tubia stuffs a bun with pasta and add-ons like shrimp and ‘shrooms for a Pasta Sub, a mashup that’s super original and portable too.
Food & Beverage

Keeping the culinary spark alive: American Dining Creations’ Campus Executive Chef Mike Tubia has stayed connected with the culinary world through social media during the pandemic but is brimming with new ideas for campus dining and anticipation of more dining out in the community and more travel as we move closer to “some sense of normalcy.”

Like many chefs sidelined by the pandemic, Mike Tubia’s culinary creativity is now bursting at the seams. As campus executive chef at Herkimer College: SUNY in New York State, Tubia has been weathering the pandemic and planning ahead while trying to stay inspired.

And also like many chefs and foodies alike, Tubia has been relying on social media to keep tabs on culinary trends, distanced and different this past year as they may be.

“With the explosion of TikTok on the heels of the popular ‘Tasty’ videos found on YouTube, it’s much easier to see what’s new and on-trend,” Tubia says. “The beauty of social media is that you can follow a diverse variety of culinarians and compare inspirations.” 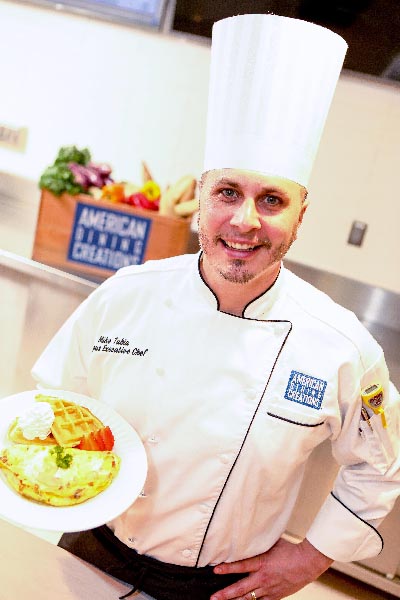 Photo: High on Mike Tubia’s post-pandemic checklist? Culinary travel. “It’s one thing to experience a version of an iconic dish from a different state,” he says, “But it’s an entirely different thing altogether to experience ‘the real thing’ from the place it originated.”

Tubia follows lots of cool culinary accounts, from Michelin-starred chefs to culinary influencers and cooks from around the world, and still sees “passion and creativity” from his vantage point. Lately, he’s been inspired by those Michelin star-style dishes and tries to re-create them on campus for the students. “Not necessarily the ingredients,” he says, “but the techniques and unique plating strategies to take an average dish and make it extraordinary.”

Something interesting he’s been working on is a mashup concept for American Dining Creations: Pasta Subs. A cross between a submarine sandwich and a hearty plate of pasta, this idea captures the zeitgeist of grab and go that’s defined college dining for a while, even pre-pandemic.

As the world begins to open up again, Tubia is looking forward to traveling, with a list of regional specialties for a culinary voyage mapped out already, and “dining out more often, enjoying new menus and getting even more inspiration from talented chefs who have been waiting to be creative again for the last 12 months.