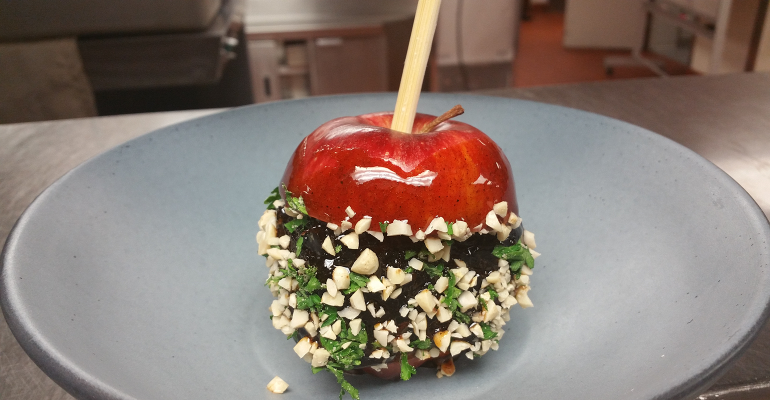 There’s a feeling in Cleveland right now that anything is possible. The Cleveland Indians are on their way to the World Series, while the city is still basking in the glow of the Cavaliers winning the NBA Finals.

And wildest dreams of the food variety are coming true at Progressive Field, the Indians’ home ballpark, where Josh Ingraham, Delaware North executive chef, has created a candied apple short rib that’s the perfect accompaniment to the sweet taste of hard-won victory. This isn’t another outlandish ballpark concoction, by the way; think about a sticky glaze on short ribs and you’ll see why this could be a home run in any arena. 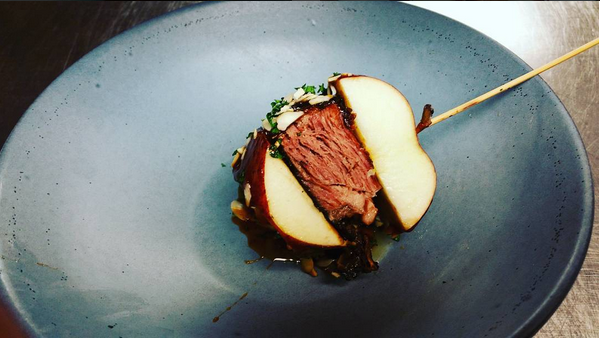 1. For cider caramel: Combine cider caramel ingredients in saucepan over medium heat until mixture starts to create large bubbles, which is usually when mixture has reached 320°F. Remove mixture from heat and hold at room temperature.
2. For short ribs: Preheat oven to 225°F. On stovetop, sear short ribs on all four sides in Dutch oven.
3. Combine all other short rib ingredients in blender and blend until smooth. Pour braising liquid into Dutch oven with short ribs. Braise in oven for 4 hours or until fork-tender. Do not braise too long to fall-apart phase; ribs must be cut into uniform squares.
4. Once short ribs have cooked, cool in braising liquid and refrigerate overnight.
5. To assemble: The next day, cut portions of rib about 6 ounces per candied apple. Place cut short ribs in 400°F oven to reheat until center reaches 165°F. Place caramel mixture on very low heat. Cut out center of each apple crosswise and replace with portioned piece of reheated short rib. Apple should have short rib sandwiched between top and bottom of apple. Take chopstick and drive it down center of apple. The bottom part of apple holds treat together.
6. To serve: Use ladle to roll apple sideways into another ladle of caramel sauce to help distribute evenly over apple. Then, roll in shallow pan with crushed walnuts and peanuts.