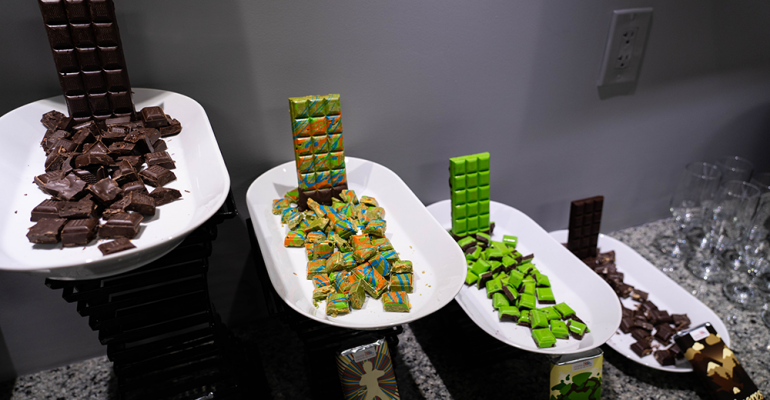 Centerplate had a sweet surprise in store for the thousands of comic book and related arts fans who gathered at the San Diego Convention Center July 19-22 for Comic-Con International San Diego 2018: A series of four candy bars designed expressly for this year’s event, something the company has been doing regularly.

“This year we went with more of a comic book theme,” notes Centerplate Executive Chef Daryl O’Donnell. “For instance, we see a lot of Superman costumes, so we came up with a Kryptonite Bar, and as “Game of Thrones” is one of the most popular things we’ve had at the shows, so we came out with the Dragonglass.”

Another popular area is anime: “You see anime everywhere around here,” O’Donnell exclaims. “It’s kind of the heart of Comic-Con in a way.” The result was a colorful anime bar.

The one holdover was a S’mores bar, “back by popular demand,” O’Donnell says.

“In years past, we did themes around ice cream flavors or snack foods such as a potato chip milk chocolate bar, coffee and donuts and an Elvis Sandwich, so some pretty unusual flavors,” adds Centerplate Pastry Chef Mathew Haven. “Sometimes it’s hard to limit it to four, but we don’t want to have too many options.”

The bars are sold at one location in the convention center lobby in a station with a chocolate-colored wood façade.

The other signature foodservice touch from Centerplate at Comic-Con is a fish taco cart.

“We custom built this massive cart and all it does is produce a craft beer-battered fish taco,” explains Centerplate General Manager Bobby Ramirez. “We actually batter the fish in the cart and fry it up. It’s a great product. People get in line for it and they’ve been Tweeting about it.”

The tortillas used in the tacos are brought in fresh each morning and warmed up in the cart.