ADVERTISEMENT
How important is the bread?
Nikolay Tsuguliev/iStock/Thinkstock

When it comes to the components of a sandwich, which part matters most to consumers? 47% are so fair-minded, they said that all components are equally important. The protein is the main event for 20% of consumers, with 12% leaning towards the cheese and just 9% citing the bread as most important.

While bread as a sandwich component may not get much respect, there’s an easy way to make it more appealing. The report found that 44% of consumers love toast. Serving sandwiches on toasted bread can boost the appeal without much effort.

Over the past four years, the crunchy, tangy savory Vietnamese sandwich on a French baguette has grown by 393% on menus.

Consumers have a favorite sandwich, and that sandwich is grilled cheese. This classic comfort food ranks highest, with 51% of consumers pledging their allegiance to melted cheese.

Following close behind grilled cheese as the favorite, subs, chicken sandwiches and Philly cheesesteaks also have a place in consumers’ hearts and stomachs.

All hail the PB&J
joebelanger/iStock/Thinkstock

The at-home staple, the peanut butter-and-jelly sandwich, surprisingly ranks just as high in consumer love as sandwiches typically offered in foodservice. Maybe it’s worth putting it on your menu?

Boomers are most likely to report that the last sandwich they ate was made of cold cuts.

Parents are the biggest demographic who report eating sandwiches while on the go, according to the report.

No one likes sandwiches more than kids. Sandwiches are at 97% penetration for K-12 menus, according to Datassential’s MenuTrends Keynote Report: Kids’ Menus.

Stepping outside of the breakfast daypart, biscuits have been growing 99% on menus since 2012. What’s more, a number of biscuit-centric concepts have opened, offering biscuit sandwiches all day, with ingredients like pulled pork and coleslaw inside.

Since sandwiches are the original convenient “on the go” food and two out of three sandwiches purchased away from home are eaten while in transit, it makes sense that packaging is a big deal. Consumers are looking for fun packaging (especially for kids) that allows for visibility of the sandwich if it’s in a grab-and-go case.

Coming down the pike will be packaging that allows consumers to eat sandwiches even if their hands are dirty. Reusable silicone sandwich pouches are also finding acceptance in certain dining situations.

Consumers (25% of them) would pay more for healthier bread. Buzzwords like “whole grain” and “natural” are resonating, prompting people to pay a premium.

What else is worth paying a premium for?
MichaelRLong/iStock/Thinkstock

The report found that 71% of foodservice operators would pay more for premium deli meats. “Most operators are purchasing deli meats to be sliced fresh in-house, and with the growth of consumer interest in foods made using healthier, better-for-you ingredients, operators are also looking to manufacturers for products that will resonate with consumers, even if it means shelling out a bit more,” the report found.

Is that all there is? Breakfast sandwich wish list
michaldziki/iStock/Thinkstock

One operator interviewed for the report expressed ennui at the field of breakfast sandwiches: “I enjoy breakfast sandwiches but can’t think of anything ‘new.’ Eggs and bacon or sausage on biscuits or croissants are a go-to. I would like a biscuits and gravy option, which I haven’t seen. A sandwich that has hash browns as a patty would be good.”

Keep an eye on this grain
Wiktory/iStock/Thinkstock

Bread made with sprouted grain is at the “inception” phase of menu saturation, according to the report. Right now, pickled toppings are in the “adoption” phase, gaining momentum and the trends of premium meats and big sandwich builds are just about everywhere now.

Foodservice operators report being interested in plant-based condiments, healthier alternatives to white bread. Also, smoked meat and tofu as a protein both made mention. Consumers say they are interested in tartines, savory jams and the French classic croque madame. 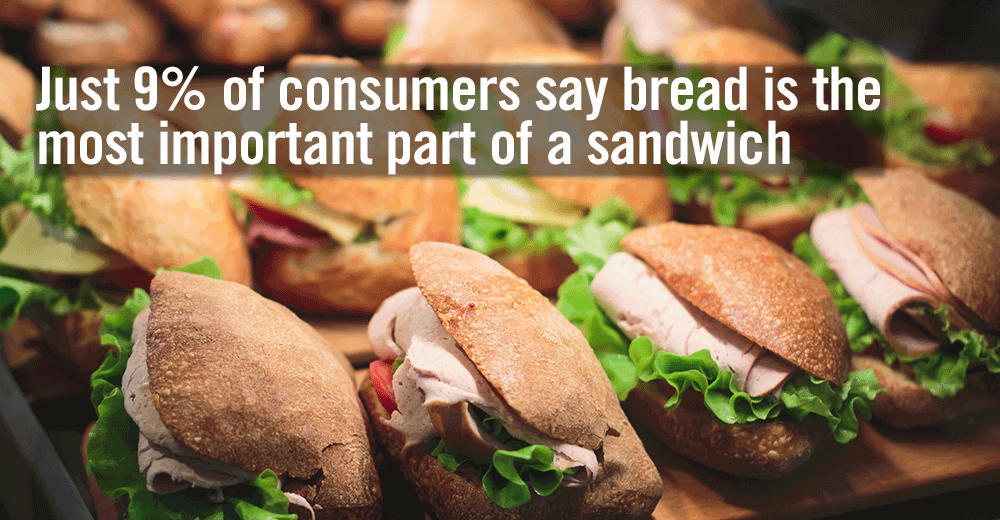