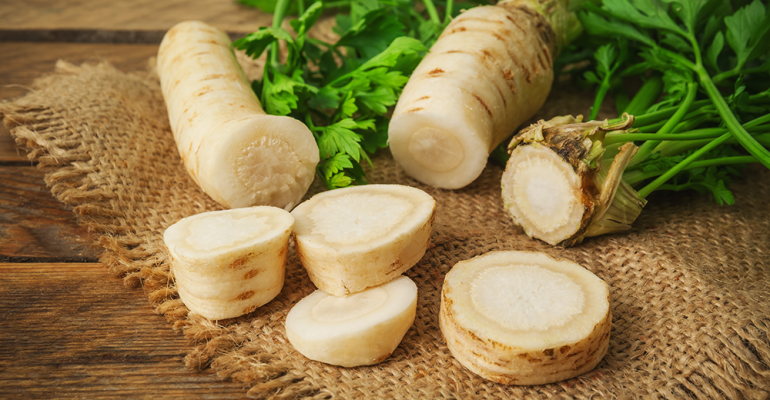 Start Slideshow ›
Carrot cousins are roasted, fried or mashed for a sweet and nutty flavor

Parsnips may look like white carrots, and both vegetables are part of the parsley family, but the lighter colored, usually larger tubers are often treated more like potatoes due to their starchier texture.

This cold-weather crop tends to be sweeter than a potato and nuttier than a carrot, and it has plenty of potential as a support ingredient, particularly with richer meats. Like potatoes, it appears on plates roasted, fried or mashed.

Parsnips are gaining traction on American restaurant menus, according to research by Datassential, jumping 50% in four years to 3%, and are found especially in independent casual-dining and progressive fast-casual restaurants.

Seventy-one percent of the population knows parsnips, Datassential reports, while 35% have tried them. Awareness is highest among Baby Boomers.

Click through this edition of FM’s Flavor of the Month to read more statistics about parsnips, and about the Mizuna restaurant in Spokane, Wash., which offers parsnips in a mushroom-mascarpone risotto.