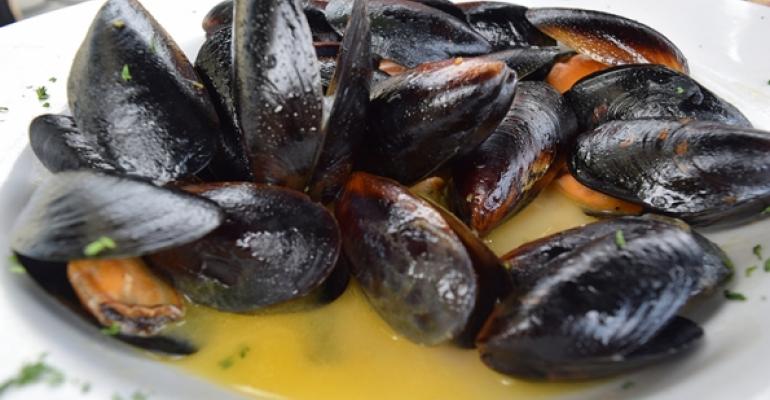 <p>PUT SOME MUSSEL INTO IT: When eating a mussel and broth dish like this one, take your first mussel, eat it and use the shell as tongs for the rest.</p>
Food & Beverage

Flavors from the sea

Serve shellfish with a sumptuous sauce, grilled, smoked or simple and unadorned, and dive into an ocean of delicious possibilities.

As subtle and secretive as their lives on the seabed, the flavors of shellfish often have to be pried open by the chef's skill. Yet, whether complemented by barbecue smoke, butter and wine, or curries and rich sauces, the shellfish's oceanic undercurrent stands out all on its own.

And then there's the oyster. Eaten raw on the half shell, it evokes the eater's primal connection with the sea.

The World is Your Oyster
Asking anyone—but especially a chef—to describe his oyster experiences can feel a little personal. The answers often include terms such as “naked” and metaphors like “a kiss from the ocean.”

“Oysters are so good fried, but they’re also so good raw,” says Rhoads Fearn, executive chef with Morrison Community Living at Lembrook senior community in Atlanta, before revealing his ultimate oyster fantasy made reality: “I said, ‘Let’s put a little caviar on an oyster.’ Oh, my God. It’s an incredibly intense taste of the ocean.”

Regional styles and flavors create a personal connection to chefs and diners alike, and often serve as a jumping-off point for Fearn when thinking about ways to offer oysters.

“That was the really fancy stuff when [residents] were growing up,” Fearn says. “But we can also try some funky takes on that dish. The chefs can riff on something like that, or something like clams casino, and we can serve it in the fine-dining restaurant.”

But before you think oysters only appeal to a mature clientele, know that millennials also love the bivalve beauties.

At the recent Seafood Extravaganza at Boston College, the students were completely psyched that there was a raw bar and patiently waited in long lines to get their own kiss from the ocean, served raw on the half shell.

The Seafood Extravaganza highlighted Boston College dining’s partnership with the Gulf of Maine Research Institute (GMRI), an organization with a scientific eye toward ecology and economics and sustainability in the seafood industry.

On hand for the event to cook, serve and educate about seafood was Andy Wilkinson, chef and seafood expert with North Coast Seafoods, a large seafood processor and distributor that partners with Boston College and several other New England schools.

The students devoured the raw oysters with just a little mignonette, the classic accompaniment, which consists of minced shallots, red wine vinegar and a touch of cracked black pepper.

Also served action station-style at the event were crabcake or shrimp sliders with chipotle mayo and Cajun fries and calamari puttanesca over angel hair pasta.

Turning the Tide with Global Flavors

Howie Velie, CEC, CHE, associate dean of culinary specializations at The Culinary Institute of America (CIA), based in Hyde Park, N.Y., spent some time in Southeast Asia when he helped the CIA open its Singapore branch.

Among many other culinary delights, he came across some great ways to prepare shellfish, shrimp especially.

“One of my favorite ways now to prepare and eat shrimp is to purée about a half pound of shrimp along with a couple slices of bacon, a clove of garlic, soy sauce, sesame oil, cilantro, salt and pepper, form that mixture into small balls, then fry or poach those and place them on a sugarcane skewer,” Velie says. “That simulates Vietnamese street food.”

Fearn also brings Asian flavor profiles to his shellfish recipes, including using oysters or shrimp on a banh mi and using a marinade that’s super simple—sweet teriyaki sauce plus crushed ginger and garlic.

Fearn turns to the Mediterranean for a saffron tomato mussel soup with a bracing squeeze of lemon juice.

Scallops also go really well with the sweet heat of Thai, Indian or African curries with flavors of coconut, peanut and chilies, since they’re relatively neutral in flavor and can act as a creamy textured sponge to soak up any of the bold flavors you’d like to impart.

And the classic French route is always a winning option with shellfish. At Lake Forest Place, another Morrison Community Living account, Executive Chef Robert MacClure says one of the best-sellers on his menu is mussels in white wine.

“In my preparation, I strive for a lightness by eliminating heavy cream,” he says. “I blend garlic, shallots, butter, white wine and fresh herbs with the mussels and I serve it with a crusty French baguette to soak up all the delicious broth.”

MacClure also uses a smoker to add flavor to shellfish.

He cautions that while adding flavor can be wonderful, it’s important in general to remember the natural deliciousness of shellfish.

“Letting the natural flavors shine through is the most important aspect to me when preparing seafood,” he says.

Fry Right
When it comes to frying oysters, Morrison Community Living Chef Rhoads Fearn has some tips to offer:
✓ Be aware of the oyster’s inherent moisture content, and dry items as much as you can with a towel before the breading process.
✓ Dipping oysters first in a buttermilk batter with a little egg and then a dry mix of breadcrumbs or cornmeal helps the breading hold on.
✓ For a crispy crust, use flour before the batter.
✓ Frying oysters should be fast and furious, and at a high temperature. The inside should still have a creamy texture.
✓ Serve fried items immediately. Fearn tells his kitchen crew: “Get them fried and go! Get them on the line, and not too many at one time and keep it rolling,” he says. “The cooks hate it because they’re in front of the fryer constantly, but when it’s done right it’s phenomenal.”