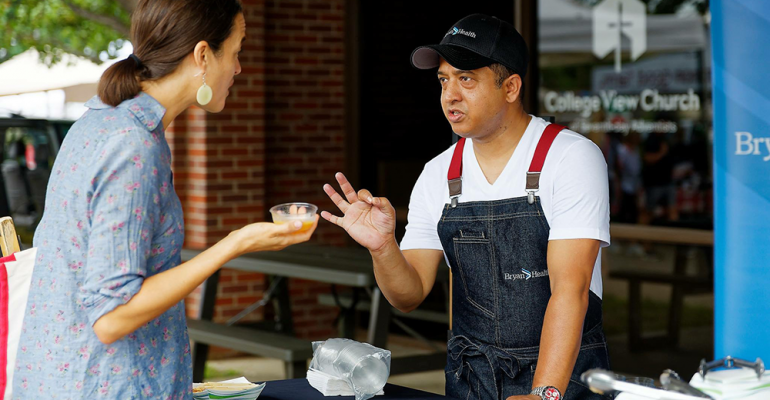 The connection between wellness and food is getting more obvious all the time. Here’s how foodservice professionals are walking the walk and helping their customers get balanced and feel great through better-in-every-way, expertly marketed, clearly communicated, fully functional nutrition.

Famous ancient doctor Hippocrates once said, “Let your food be your medicine.” But somehow along the way, that message seemed to be lost to the sands of time. Within the last few years, though, it’s being rediscovered. The medical community is looking to foodservice professionals to essentially “keep the doctor away,” but it’s going to take more than “an apple a day.” It takes education. Onsite foodservice providers are in a unique position to influence the everyday food choices of their guests for the better, and we’ll take a look at the changes in attitude toward “health food” and the implementation of such changes: marketing programs, community outreach, integration with educational programs and wellness initiatives that are leading the way.

As vice president of health and nutrition for Morrison Healthcare, Chef Cary Neff sees global cooking styles with bold flavor and functional ingredients as the push needed to take food into the future.

Now, Neff predicts a raised consciousness and desire for “whole, sustainable foods that are free from unnecessary antibiotics, growth hormones, artificial flavors and colors, and an increased movement to reduce the consumption of animal products and more use of vegetables, whole grains and plant-based proteins,” much as he outlined in his book, “Conscious Cuisine.”

Words like “conscious” and “mindful” are entering the food-as-medicine conversation more and more, with forward-thinking dietitians teaching consumers a holistic approach with built-in moderation and room for splurges, rather than a canon of food rules to memorize or pamphlets to take home. Instead, effort to educate are increasingly about interaction.

Ashley Foster, RD, administrative dietitian with Virginia Tech Dining Services, boils down her healthy-eating philosophy into two words: “moderation and balance.” She’ll encourage leaving off croutons, bacon and ranch from a salad, but don’t be surprised if you see her in the dining hall enjoying a burger and fries once in a while. (“One of my pet peeves,” Foster says, “is when I’m in the dining hall and someone says, ‘Oh, you’re the dietitian and you’re eating that?’ Yes, I am!”)

To that point, Virginia Tech dining has rejected the idea of calling out and labeling “smart choices” or other cues to healthy menu items.

“On our campus, we don’t have designated ‘healthy’ menu items,” Foster says. “Obviously some items are healthier than others. But can you fit a fried chicken sandwich into a healthy diet? Yes!” 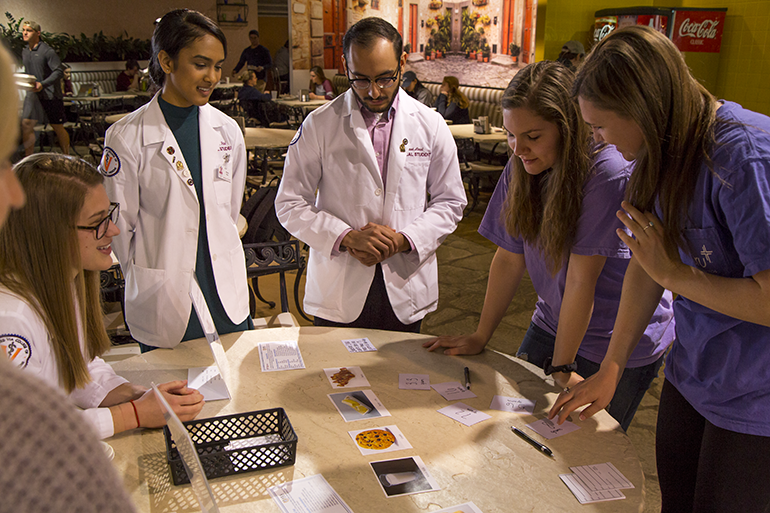 Students who will be osteopathic doctors one day practice teaching nutrition to Virginia Tech students.

As a dietitian, Foster has lately been teaching the concept of intuitive eating, basically listening to hunger cues and not mistaking boredom for hunger.

But still, with all the great choices of what to eat at Virginia Tech, Foster has noticed that the ever-improving world of college dining can sometimes be a detriment to healthy eating, sort of the freshman 15, version 2.0.

“When you come into a great dining program, that has such a variety, I think students freak out and want to try everything: burgers, quesadillas, french fries…they want to try it all,” Foster says.

She believes a dietitian’s role is to help students figure out to live a little, get a handle on moderation and “definitely try those dishes, but you don’t have to eat the 1,000-calorie chicken and waffles every day,” Foster says. With students needing (and seeking) guidance, and several educational communities within close reach (and needing experience with teaching nutrition), a plan was hatched.

Foster and her dietetic interns last year helped launch a six-monthlong wellness initiative called HouseCalls. It’s a project that brings the food conversation to the forefront and combines several communities within campus: the dining team, the students who eat on campus, nutrition students at Virginia Tech and students in the field of osteopathic medicine at VCOM (The Edward Via College of Osteopathic Medicine), a separate school that’s on the Virginia Tech campus.

The future doctors—about 180 of them—all need to start practicing interactions with a variety of healthcare professionals they might work with, from dietitians to physical therapists. With the size of Virginia Tech’s dining program, it’s a natural fit to help the VCOM students with nutrition education experience.

“We talked it out and thought, how we could best benefit them and vice versa,” Foster says. 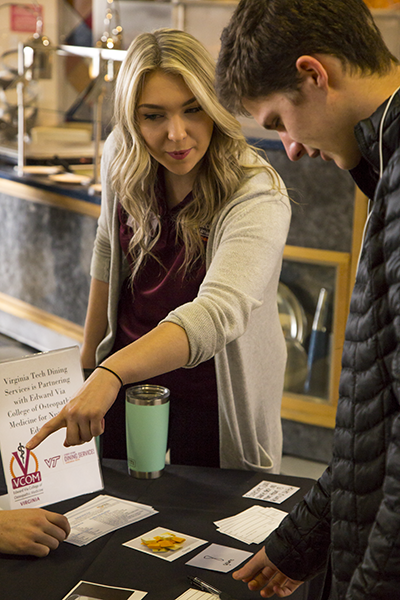 ‘We don’t do brochures’

The HouseCalls program put the VCOM students in charge of fun, interactive events that took place over 16 Fridays during lunchtime at four of Virginia Tech’s largest dining centers. The main objective was an interactive experience: show, don’t tell, in other words. One activity included matching up sugar packets to corresponding beverages to guess how much sugar is inside.

“We don’t do brochures or handouts, because we see them getting thrown away a lot,” Foster says.

Beforehand, the VCOM students worked with Foster’s dietitians and nutrition students to create an educational table setup with something to attract attention and a nutrition lesson to be learned, plus prizes. In the end, more than 1,200 students took part and all of the doctors-to-be received real-life nutrition education training.

“We’re preparing them to work with patients and also for the community aspect of being a doctor of osteopathic medicine, to interact with people and provide nutritional information,” Foster says. “In the healthcare field, they’ve found the value of dietitians so it’s important for medical students to have the appreciation for dietitians.”

And an unexpected “side effect” of the HouseCalls program has been new customers for the dining program: many of the VCOM students had never eaten on campus before, but this project gave them a chance to see what they had been missing (including the burgers and fries!).

Farm-to-table so much more than a catchphrase

Nazim Khan, CEC, WCEC, executive chef at Bryan Health in Lincoln, Neb., has had his eye on natural disasters and climate change lately, specifically what it could all potentially mean to our food supply.

“We need to support local farming,” he says. “We don’t want to be so dependent on California or Mexico for produce. What if—God forbid—there’s some disaster? We need to train at this moment to eat locally and mentally prepare.”

That may sound a little daunting, but Khan’s approach has actually been very practical and down to earth. All last summer—and every summer now—Khan spends his Fridays at a local farmers’ market, doing cooking demos that feature an abundant veggie and/or fruit that’s available for the community to take home and cook that day. He teaches about pickling and charring, techniques that add so much flavor and needn’t be intimidating to the home cook. The demos have been simple and successful, with samples for everyone. (The market’s manager has told Khan to keep coming back, because he really draws the crowds—500 people and up).

Khan also brings a lot of that produce back to the hospital cafeteria, where he’s done amazing things with composed salads (think crab cakes and shrimp on top of crisp arugula and rainbow-colored cherry tomatoes), always quick to highlight the local fresh basil or tarragon on top with a local honey vinaigrette. 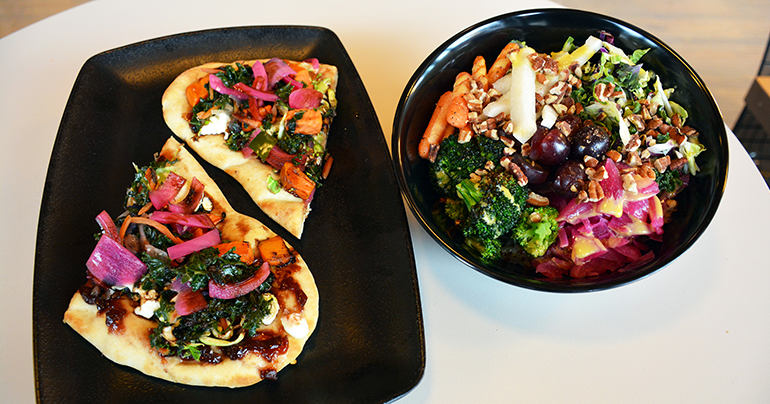 The perfect vessel for teaching

The bowl trend happens to be a great way to show how different types of nutrient-dense foods can be enjoyed together.

At the University of Washington, the Food Literacy Program kicked off in the spring with an open-house event to introduce Tero, a concept built on the foundations of Menus of Change [a plant-forward initiative developed by The Culinary Institute of America and the Harvard T.H. Chan School of Public Health that’s followed by several colleges and healthcare foodservice operations].

Grain bowls (and also the whole-grain flatbread option) make getting the components of healthful eating easy: whole grains like quinoa, amaranth and farro; fresh veggies with lean protein and sauces that pack a flavorful punch. Executive Chef Tracey MacRae and Nutritionist Joyce Bumgarner added items like jackfruit to the bowls as well, combined with info cards (“What is Jackfruit? It’s a delicious fruit belonging to the mulberry family, is packed with vitamin C which helps protect against bacterial as well as viral infections and strengthens immunity”) that students can grab and read while they eat.

Is plant-forward the way forward?

When Microsoft created a cool outdoor barbecue concept inside an upcycled trailer (see p. TK), they realized the fact that “barbecue is all about meat,” says Mark Freeman, foodservice director. “But what’s starting to show up for us…because our eyes are open, we’re starting to see some things.”

He’s talking not just about the Impossible Burger and other almost-like-real burgers, but about the idea of plant-forward as a viable way to eat.

“I ran into a vendor recently who was doing plant-based sushi and it was incredible,” Freeman says. “Instead of tuna across the top, they had tomato. Instead of eel, they were using eggplant.”

To the future of dining at Microsoft—and the planet in general—Freeman thinks that the important question isn’t so much “is everyone becoming vegan? Or “do the meat eaters just want a break from meat?” But rather, the focus should be on providing plant-based alternatives regardless.