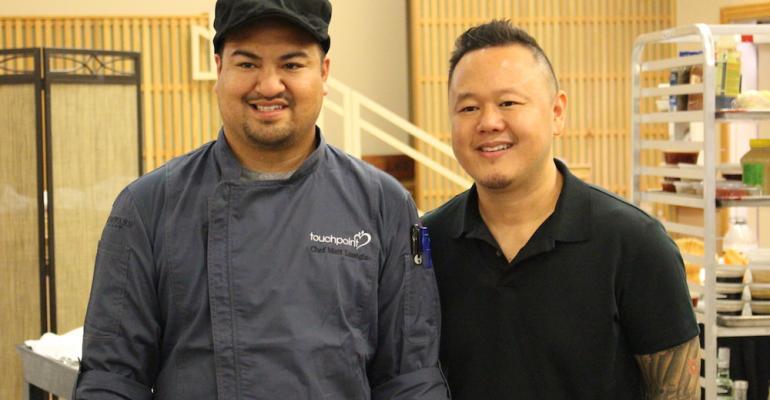 In case you haven’t seen “Cutthroat Kitchen” on TV, maddening sabotages, crazy costumes and plenty of trash talk are part of the game.

Last month, Tila presided over a similarly diabolical contest between some of the senior dining world’s toughest chefs. The excitement ran high, and the audience of senior residents in the audience enjoyed the show.

Competing chefs, who had risen to the top regionally, included Shawn Hunt and William Rodimon of Morrison Community Living and Matt Luangla and Dennis Rogers of TouchPoint Support Services.

Throughout three courses of competition, the chefs were faced with such sabotages as using only a golf club as a cooking tool and dressing in a cumbersome peanut butter and jelly sandwich costume. Another go-to “Cutthroat Sabotage” involves necessary ingredients and tools wrapped up in a giant foil ball that eats up precious seconds of competition to unravel.

No matter the obstacles, the chefs had to prepare the courses: a barbecue plate for the first course, dessert pizza for the second, and soup and salad for the final round. In the end, Luangla was the champion.

“It’s a good mix of fun and competition. Every chef wants to feel that they’re the best,” Tila says, adding that part of the Food Fight is an LA dine-around the night before at some of the hottest restaurants in town, getting the Morrison chefs “out of their element and up to date on food trends.”

Some of those trends will likely find their way back to Morrison Community Living, part of a growing industry that’s gaining recognition.

“It’s an amazing category and I’ll continue to spend time with senior living,” Tila says. “Besides being a good business opportunity, [this industry] is a chance for chefs to do good and help take care of this generation that took care of all of us.”