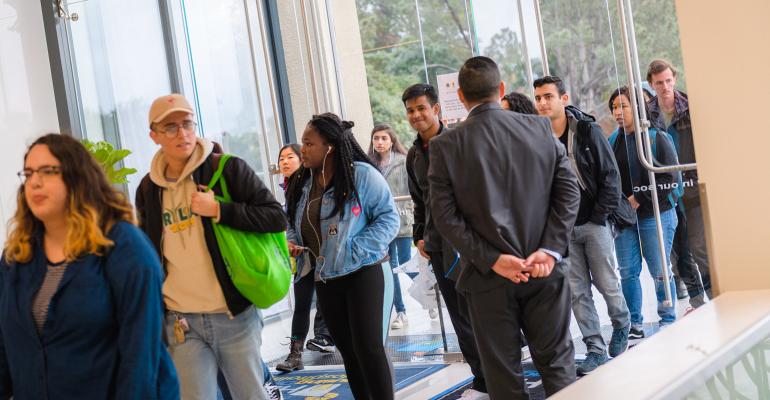 The University of California at San Diego’s newest dining location, OceanView, offers diners a view of the water, exhibition-style food preparation, and a full range of scratch-made foods that are halal friendly and certified glatt kosher.

Since it opened to the public last month, lines have stretched out the door.

The Union of Jewish Students and the Muslim Student Association approached the university in 2014, requesting proteins that meet their dietary needs. Photo: The University of California at San Diego

Leo Acosta, assistant director of dining and culinary services, agreed: “This is why we are here, to serve,” he says. “We’re taking care of everybody.”

The culinary services team started the project by educating themselves. They researched halal and kosher diets, met with students, and connected with Muslim and Jewish members of the San Diego community. All the parties were energized by the possibility of an enticing array of meal choices in a space where all students can gather and eat together.

“Food is common to us all,” says Business Development Manager Jason Andrews. “No matter what your religious background, no matter what your belief system or your political stance, it’s something that can really unite.”

Kosher certification is more complex than halal, making it the most inclusive option for the project. Many who adhere to a halal diet eat kosher meats; the reverse is not true of kosher adherents.

Kosher certification requires a separate, controlled environment in order to comply with kashrut (Jewish dietary laws). To create the right space, the university approved a renovation of the 1980s-era dining hall.

The building is free of pork—the ubiquitous meat is a barrier for both Muslim and Jewish students. All recipes, including dressings and other condiments, are made without alcohol or alcohol-containing vinegars.

Photo: The University of California at San Diego
Trending this week: Restaurateurs support immigrants, Workers cannot be ‘on call,', more To obtain certifications and navigate the process, the university partnered with rabbi Yehuda Hadjadj and the local rabbinical council.

Together, they spent a year developing job descriptions for and recruiting two “quality assurance chefs” who function as kosher supervisors. One of these supervisors oversees operations during every shift, from meticulous vegetable inspections (they must be free of insects) to food preparation and delivery.

Student employees received training in protocols and proper practice, such as serving different proteins on separate plates. All new equipment was required and each piece was inspected and approved by Hadjadj.

Each menu features rotisserie chicken adapted to the daily cuisine. A second protein is always on offer, such as lamb, beef, salmon or tilapia. The concept is heavy on side dishes, such as green bean and freekah salad, Indonesian fried rice, or farro pilaf made with apple and fennel

The guiding principle is to develop meals that appeal to the general student population.

OceanView is one of 19 dining locations that serve the university’s 30,000 students.

Photo: The University of California at San Diego
Trending this week: Restaurateurs support immigrants, Workers cannot be ‘on call,', more

It houses three concepts: Spice; 3rd Kitchen, a halal-friendly hearth-fired pizza station; and Counter Culture, a 24/7 coffee, pastry and gelato bar. An all-night spot where students can congregate is a first on campus. The facility is open seven days a week. Spice is open weekdays, closing at 2 on Fridays.

The response to the new location has been enthusiastic.

“There’s been an outpouring of requests,” Acosta says.

“We’re in a good groove, but not yet,” Acosta laughs. “We’re still learning.”

Though they aren’t ready to provide catering, Acosta says they’re already talking about next steps, such as a third-party pizza delivery system.

“There’s so much promise,” he says. “The potential is there.”