Beans are both the backbone of traditional Mexican cuisine and pathway to the plant-based future of food.

Poblano’s, Metz Culinary Management’s branded Mexican build-it-yourself concept, is found at multiple Metz accounts, from colleges to healthcare retail operations. Considering the audiences at those accounts in particular, Kim Salahie, director of culinary development at Metz, has focused on bringing the Poblano’s brand up to speed with current trends, including healthier options.

Salahie and his team have taken the “better for you” angle for new menu items in Poblano’s portfolio, with a focus on beans, “because of their importance in traditional Latin cooking, as well as their importance in plant-based cuisine as a source of protein,” Salahie says. “Beans are a great protein source with complex carbs, while being low in fat and rich in vitamins and minerals.”

One of the new menu items that rolled out last year, black bean stew, begins not with canned beans, but with dried, going the traditional route. About that—there are pros and cons in the dried bean vs. canned bean debate. Nutritionally, the beans are about the same, but canned beans can have a lot more sodium. Dried beans are cheaper but take longer to prepare. The texture of dried beans is more substantial than canned, but then runs the risk of becoming chewy or dry if cooked incorrectly. 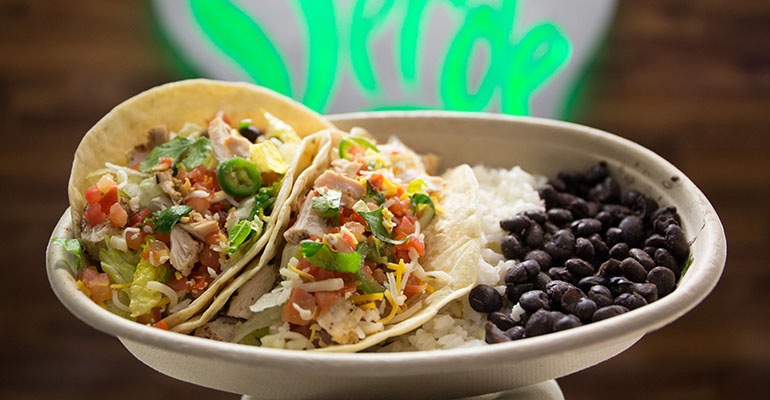 To that end, Metz’s training manual has a special section on picking over dried beans for debris, rinsing them thoroughly and then soaking them overnight before they can be used in recipes at Poblano’s and other concepts.

While the use of beans in Latin cuisine is one tradition Metz chefs have held onto, they are tweaking another: pork fat, which is ubiquitous especially in Mexican cooking, has been cut out of the black bean stew recipe.

Other recent upgrades to Poblano’s include housemade pico de gallo, crema and tomatillo salsas; preparing animal proteins in a slow braise; and including authentic cotija cheese as an add-on. The changes have been received positively at pilot accounts, reportedly increasing traffic by about 80 to 110 transactions per day, and Metz plans to add the stew and other plant-forward dishes to more Poblanos locations later this year.

Another branded Mexican concept, Verde, provides students at USC with fresh bowls or burritos stuffed with grilled chicken, carne asada or carnitas…but beans are always available for a plant-based option, mixed into a meaty burrito and also as a stellar side dish that rounds out a hybrid “can’t decide between two tacos or a rice bowl” platter that’s a popular choice at Verde.

Beans can also be blended with other plants—like oyster mushrooms or quinoa—to become a strong meat substitute in dishes with traditionally meaty fillings, like enchiladas or tamales.

At Weld County School District 6 in Greeley, Colorado, meatless tacos created to celebrate Earth Day are a powerhouse menu item with just a few ingredients: cooked quinoa, cooked sweet potatoes, taco seasoning and canned black beans, all mixed together, stuffed into tortillas, stored in a hotel pan and ready to go for a taco-rific school lunch with a tiny carbon footprint.