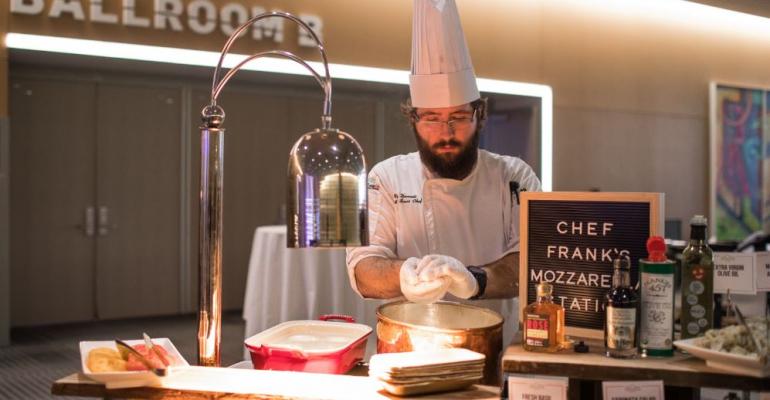 Hand-pulled mozzarella station, developed by Levy Convention Centers’ VP of Culinary Frank Abbinanti, is just the thing to impress at events, with more interest (and cheese pulls) as an action station.

Levy Convention Centers’ mozzarella pulling station checks the boxes for experiential catering at its best—and most deliciously cheesy. Levy’s VP of Culinary, Chef Frank Abbinanti, is focused on creating one-of-a-kind experiences, something organizations are willing to invest in for events.

Abbinanti, who grew up in Sicily and Chicago and now travels all over the U.S. to Levy accounts, looks for action stations that are memorable, and the freshly made mozzarella station idea may not seem new to Sicilians—or chefs—but to the average convention attendee, it’s out of the ordinary.

“As a kid in Sicily, we made a lot of our own food: growing, pickling, bottling…to a Sicilian, buying tomato sauce in a jar would be sin. We had a half a field of tomatoes! And we made our own ricotta and mozzarella,” Abbinanti says.

He parlayed this memory into something to be shared with those of us who didn’t grow up on the Italian countryside.

“When I think about innovation and what’s trendy and what is really creative, it’s giving people an experience they’ve never seen before,” he says. “So, it’s knowing your audience, too; if I did mozzarella for a group of chefs who grew up on farms, they’d be like, ‘Big deal!’ But for groups who don’t know how it’s made, it makes a big impact.”

When guests approach Abbinanti’s mozzarella station, they’ll see what it means to make a favorite cheese that isn’t often seen behind the scenes, starting with curds heated in pots of water then pulled into a smooth ball of mouthwatering mozz.

“My grandmother didn’t need gloves. Her hands were like leather,” he says. “And chefs are used to handling hot pans; our hands are tougher. You don’t shy away from it.”

In addition, a couple of layers of gloves are worn in a foodservice setting, effective for both food safety and muting the hot water a bit.

Earlier last year, Abbninanti created training videos for Levy chefs and visited convention centers, including the Columbus Convention Center, showing how to replicate this station—and to make it their own.

Mozzarella’s power is in its simplicity, so nothing too elaborate is needed to serve alongside. Salt, pepper, a drizzle of olive oil and toasted bread can be the perfect vehicle for guests to try freshly made mozz. Tomatoes, fresh basil, local charcuterie meats, marinated olives and grilled local veggies are also options for chefs to make this mozzarella their own. The local accoutrements also provide more talking points for the action station conversations between chefs and guests.

“In today’s world, people want to know where their food comes from and seeing a chef in a white coat and being educated on how something is made,” Abbinanti says. “We’re pretty successful when we introduce menus that check those boxes. It’s become a part of our culture at Levy: How do we engage with the guest and add something educational?”