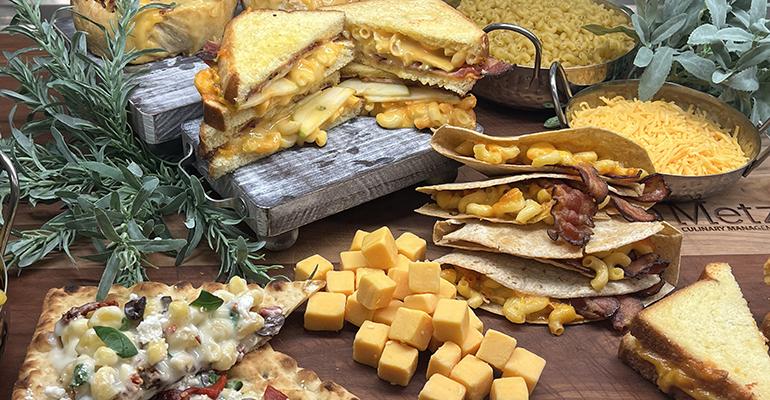 For totally mac-tacular takes on the classic American casserole, mac ‘n cheese, the flavors, add-ons and mashups are cheesier, smokier, sassier and more creative than ever. Plus, quick presto-change-o ideas for magical mac.

Aramark’s Jamar Ikner, hospitality cook at Saint Peter’s University, has a secret-recipe mac ‘n cheese that he makes every day at MacMahon Hall. This mac, gold and creamy with a crisp baked top, reminds students and faculty of the comforts of home and the holidays.

It’s not only served to students on the spot, but also packaged under a private label for retail sales at Pete’s Place and a new c-store, The Nest, so students can mac ‘n go. While the original is obviously perfect, Ikner still likes to tinker with variations and add-ons, getting inspiration from the younger generation on campus.

“For me, it’s all about my students,” he says. “I enjoy when they find me in the dining hall and let me know they tried a ‘Jamar Original,’ and they can’t wait to see what will be next.” Up next for mac ‘n cheese embellishments? Cheesesteak mac (sign us up!), roasted garlic mac and caramelized onion mac.

Choose your own cheesy adventure 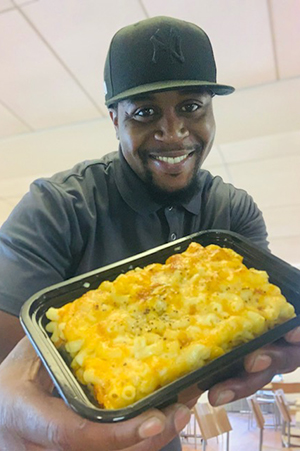 Photo: A closely guarded secret family recipe is the foundation for the mac ‘n cheese adventures of Aramark’s Jamar Ikner.

Hornet Nest Fest, or just “Nest Fest,” as it’s known on campus, is CSU Sacramento’s way of welcoming students back for a new school year at the end of summer. For the last couple of years, the event has been built on a solid foundation of pure mac ‘n cheese bliss, either vegan or topped with brisket.

“Everybody loved it,” says Aramark Catering Director Laura Zieg of this year’s event. “Last year, we did the toppings separately, but this year we opted to add the brisket to the mac for the sake of speed of service.”

Mac ‘n cheese shows up at other events, too, with versions and recipes evolving over time. “The mac ‘n cheese ideas have pretty much morphed for the last handful of years,” Zieg says. “Every year, we do a mac ‘n cheese bar at the President’s Holiday Party and it’s an absolute hit. We did it as an action station so the mac is hot and creamy. People choose from a variety of toppings, including bacon, mushrooms, crispy onions, broccoli, bleu cheese and more.”

And in an effort to change things up, Zieg ran up against a true sign of a classic-in-the-making: Pushback from fans. “The mac ‘n cheese bar is so popular that I even suggested we change it this year since we’ve done it so much, and that did not go over well,” she says.

A toppings bar is a great way for customers to make their own mac ‘n cheese magic with the mac base. Another route is to take that base and turn it into something different entirely.

Chef-GM Don “Donny Mac” McIntosh and the Metz Culinary Management team at Westmont Hilltop School District kicked off the school year living up to Donny’s name, with many melty mac variations. The Greek mac ‘n cheese flatbread pizza mashes up a few cultures and flavors: Cavatappi pasta in a white cheddar sauce with sundried tomatoes, roasted peppers, spinach, kalamata olives and topped with feta, served all baked and bubbly. Other items include a bacon-mac bread bowl (a student and teacher favorite, especially for fall and winter) and the handheld bacon-mac quesadilla. 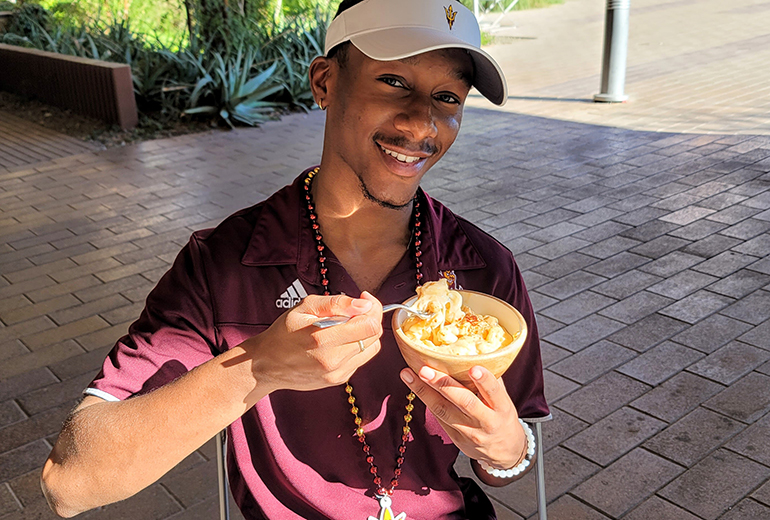 Chipotle Cheesy Mac has been an icon for the past 14 years Arizona State University.

The second new mac on the block is maple-bacon mac ‘n cheese, with autumn brunch vibes courtesy of fall spices (nutmeg, cinnamon) and crispy bacon added to traditional mac ‘n cheese with a mozzarella base. Like the Southwest mac, this dish gets garnished with panko topping, but in a sweet direction, toasted with brown sugar and maple syrup.

Another mac on the smoky side with Southwest vibes from another Aramark account is Chipotle Cheesy Mac, an icon for the past 14 years Arizona State University’s Tempe campus Tooker dining hall. When GM of Residential Dining Steve Lamberg started here, he also started this tradition.

“I wanted a dish that would showcase the spicy, smoky sweetness of the Southwest and there isn’t anything better than chipotle spice combined with the comfort of a great dish like macaroni and cheese,” Lamberg says. “The students love it and it puts a distinctive ASU flavor on a hometown favorite. Everyone loves mac ‘n cheese.” Students interviewed about the dish call it a “go-to comfort food.” 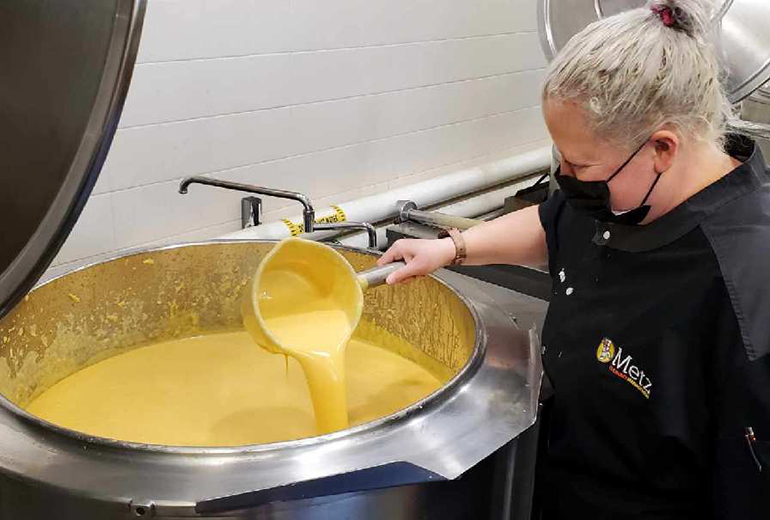 Lamberg has built on this cheesy foundation, encouraging culinary staff at all the dining halls to keep creating their own signature version of mac ‘n cheese magic.

A quick way to smoky flavor with minimal effort? Smoked paprika can carry that smokehouse flavor into cheese easily. Aramark Executive Chef Alicia Rivera at Lewisville ISD uses paprika and parmesan in her mac, which often gets cut into bites that are air fried and snapped up quickly at catered events.

Chef-Director Jason Hull, a farm-to-school pioneer in Northern California’s Marin Country Day School, makes mac ‘n cheese from scratch, with a newish recipe featuring a more complex mix of smoked gouda, parmesan and sharp white cheddar, hitting several cheese receptors at the same time. “Our students palates lit up with delight with this new version of an old classic,” Hull says. “Kids often eat with their eyes, but when they eat with an open mind and heart, it changes their world.”