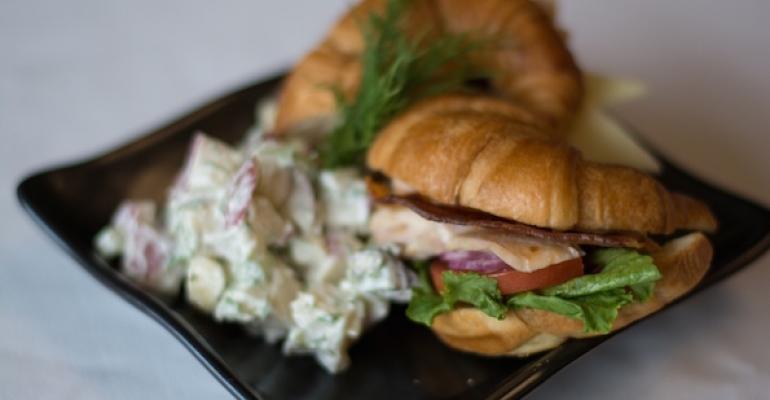 A drizzle on flapjacks is just the beginning, especially in the Northeast, where chefs are tapping into maple syrup&rsquo;s versatility.

You could say maple syrup is kind of a big deal in Vermont. Every fourth tree there is a maple, and in 2013, the maple syrup industry contributed between $317 and $330 million in sales to the state’s economy, according to the Center for Rural Studies at the University of Vermont (UVM). Students at UVM consume about 1,000 sweet gallons of the authentic, real-deal sweet stuff per school year.

UVM dining uses maple syrup for such menu stars as maple-glazed bacon-wrapped scallops, ginger-rubbed salmon with a maple-soy glaze and a maple-glazed chicken sandwich that combines a little Dijon mustard with a lot of maple syrup for the glaze. Oh, and maple blondies for dessert.

“We no longer offer anything but real maple syrup,” says Kate Hays, campus chef with Sodexo. The partnership, which began last fall, is part of a larger initiative by Sodexo called Vermont First, which focuses on local food purchasing. PMRC is a nonprofit, which made a difference in being a good value for UVM dining.

A Vermont tradition, sugar and snow, is often served at get-togethers during “the boil,” a part of the syrup-making process. The revelers drizzle maple syrup over snow, which results in a delightfully taffylike treat. But here’s where it gets weird: sour pickles are served on the side! Locals say it cuts the sweetness.

What’s next with maple syrup? Possibly maple water, which is the unboiled sap of maple trees. It’s being marketed now as a better tasting and lower calorie alternative to coconut water. Maple is also popping up as a sugar, in candies, mustards, hot sauces, salad dressings, barbecue sauce and as a glaze for bacon.

Some Cornell University students were a little skeptical when handed sample-size maple syrup-bacon milkshakes, but they quickly embraced the trend. Now that milkshake is on the menu. Maple syrup is used elsewhere by Cornell dining, as in the maple vinaigrette and it serves as a sweet accent on the DIY yogurt bowl bar.