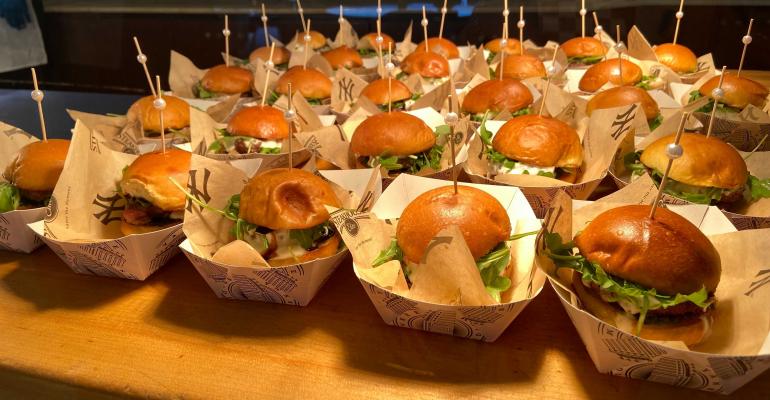 Start Slideshow ›
Bobby Flay, City Winery and more round out the New York baseball team’s Bronx lineup for the 2022-2023 season

Baseball season is underway and with it comes concessions. New food from Marcus Samuelsson of Red Rooster in Harlem is headlining the show at Yankee Stadium in the Bronx. Nation’s Restaurant News spoke with the chef about his new concept and his entrance into non-commercial foodservice in the video above. We also toured all the new concessions offered at Yankee Stadium this year, with offerings from Bobby Flay, The Halal Guys, City Winery, Sumo Dog and more.

Some of the other offerings this year include food from Applegate Naturals, Bobby’s Burgers, Chickie’s & Pete’s, Oatly, and Wings of New York. Both Streetbird by Marcus Samuelsson and The Halal Guys are making their Yankee Stadium debuts this year with food like The Hot Bird Sandwich: Boneless thigh, spicy chica shake, slaw, and house made pickles; Big Fly Chicken and Waffle: Hot honey, cornbread waffle and house made pickles from the former and Beef Gyro Platter: Served with beef gyro, rice, lettuce, tomatoes, and pita bread; and Chicken Platter: Served with chicken, rice, lettuce, tomatoes and pita bread from the latter.

Click through the gallery to see all the concessions and head over to Nation’s Restaurant News to hear directly from Marcus Samuelsson about starting a noncommercial venture.