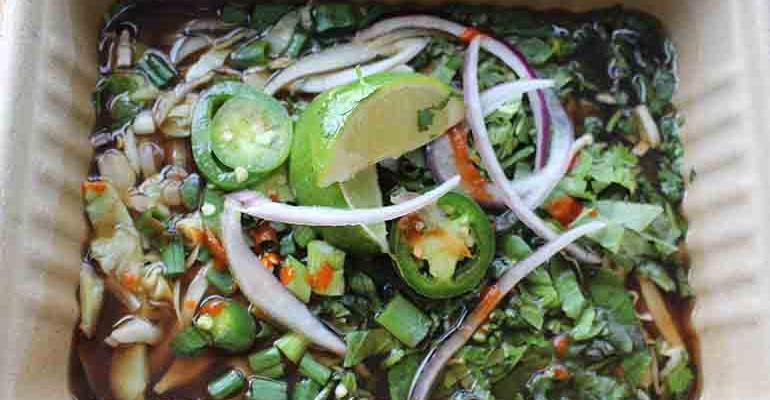 Starting with a rich, long-simmered broth and finishing with bold toppings, pho is a flavor journey in a bowl.

Go ahead and slurp. Pho is the Vietnamese dish that Americans have really fallen for, thanks to its amazing flavor and comforting nature. The word pho is said to come from the French “pot au feu,” or “pot on the fire,” which refers to a French beef stew, but also describes the process of extracting flavor from bones and aromatics into a broth that’s the foundation of pho.

Every Friday is pho day at PeaceHealth St. Joseph Medical Center in Bellingham, Wash., where Khanh Trinh, lead cook, shares his signature dish with eager regulars who line up to slurp almost 200 bowls of the fragrant noodles.

“People just love it,” says Prem Jain, foodservice director at the hospital with Thomas Cuisine Management. “On Friday, they just wait for Khan to come out and they want to shake his hand. We have a lot of Vietnam vets here and they appreciate it.” Trinh’s own history traces back to Vietnam, too. He emigrated from Vietnam in 1991. His father had been a captain with the South Vietnamese army and was a POW in North Vietnam for five years. Since his father had helped the Americans, the family was able to come to the U.S. for their protection. In February of 1994, Trinh came to work at PeaceHealth, starting as a dishwasher.

Soon after he started cooking, Trinh got permission to put pho on the menu, but he didn’t really like the recipe. In 2010, he was finally able to introduce his own recipe. And it has really taken off. Every Thursday morning at 8:30, he starts the pho by simmering 25 pounds each of chicken and beef bones with water and precise amounts of ginger, onion, peppercorns, cinnamon sticks, clove, fennel, coriander and star anise.

Throughout the simmering process, “I let it all swim together, and I get a ladle and take the foam off the top, until the water is nice and clear,” Trinh says. “Later, when it’s in the refrigerator, fat comes to the top and we skim that off, too.”

The broth simmers until about 2:30 p.m., and by then, the aroma is making hospital staff count down the hours until Pho Friday.

When it’s finally time, the pho can be customized with the addition of chicken, tofu, cabbage, jalapeño and all the toppings that make the flavor really pop—Sriracha, cilantro, hoisin sauce and more (see sidebar for more pho topping essentials).

It’s not just hospital employees who are pho fanatics. Many regulars are spouses and family members of employees and community members from the surrounding neighborhood. During the three hours of lunch service, the pho usually sells out. With the recent publication of a local news story, the lines have gotten even longer.

“I love cooking because my grandfather owned a restaurant and he taught me about pho,” Trinh says. “If you care about the food, just like you care about your customers, you’ll get good food. Make the food with love, and your food will run out very fast.” The pho pop-up at Sam’s Club Home Office in Bentonville, Ark., is called Beauti-Pho, and the bowls truly possess a savory beauty. Here’s the list of toppings that must be on hand (and bonus toppings that are nice to have too).

Nice to have:
Sambal
Soy sauce
Shiitake mushrooms
Something to know about pho: