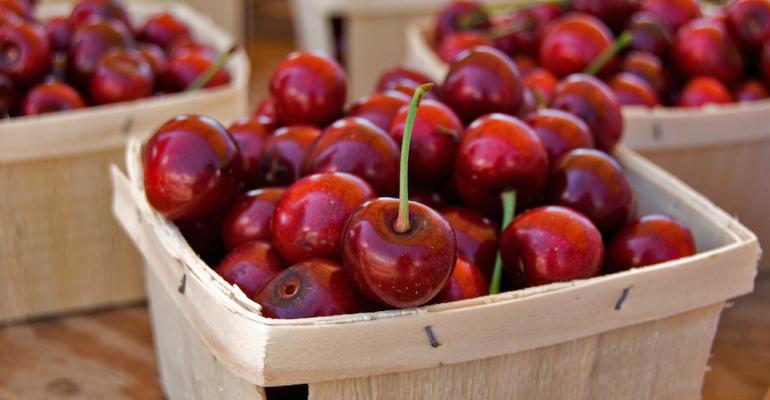 Midwestern chefs share how local ingredients and life in the elements have shaped their kitchen philosophies.

Living in the Great Lakes region of the Midwest can be paradoxical at times. Its greatest charm is also the source of its greatest annoyances: the seasons.

Watch Midwesterners curse the elements as they scrape their windshields during a harsh, endless winter. Then watch them wander into the forest with a renewed sense of wonder every spring, hunting for morels to roast over an open fire. This love-hate relationship with the elements always comes with a silver lining: amazing local food.

“Growing up in Michigan, I was raised to live off the land,” says Bryan Latz, executive chef, Michigan State University Culinary Services, South Neighborhood. With a family that hunted, fished, gardened and foraged, Latz grew up appreciating all the region has to offer, from freshwater fish, wild mushrooms and wild game to sweet corn and tart cherries. Among his Midwestern food favorites: venison nuggets, beer-battered perch and a simple tomato sandwich.

Spring: A sweet start and the morel of the story
“After a long winter in Michigan—or if we’re lucky, a short one—the first sign of winter’s passing is the collection of sap buckets hanging from the sugar maples,” Strotheide says. “The age-old tradition of reducing sap has changed faces a bit over the years, but that distinct aroma and flavor haven’t changed.”

After the maple syrup festivals that celebrate the sap, “it’s just a short wait for the ice to break apart on the lakes, the buds on the trees to start showing,” and the appearance of the mushroom that many Midwestern chefs lust after: the morel.

The thrill of the hunt is one component that makes the morel so exciting; this mushroom can be elusive.

“The hunting of the mushrooms is half the fun,” Latz adds. “Mushroom hunting is  a real skill set that takes years to master, including where to look or how to even spot one.”

Latz’s father can spot a morel from a quarter mile away, while Latz struggles “when they’re right in front of me,” he says, adding that the best preparation for morels is simple: sautéed in butter and serving alongside venison.

“I think my dad said that once and I adopted it as law,” Batten recalls. “He said that we never buy or sell morels. The point is, you want to go look for them. Never tell anybody where you found them.”

But that doesn’t mean you can’t be generous with morels. On the contrary, Batten, his dad and his uncle would regularly find about 100 pounds of morels within a two-week span and would divide these up for family and friends. When it became harder for Batten’s grandmother to get around, the family brought her out to hunt morels in a four-wheeler. Here are some of Batten’s favorite ways to serve morels:

-Old school: Morels cut in half, soaked in water to clean, drained and then coated with egg wash and crunchy breadcrumbs. Shallow-fry in a pan of hot oil, and serve with ketchup on the side.

-Maximum mushroom flavor: Morels cut in half, soaked in water, drained and sautéed in butter with any combination of lots of garlic, scapes, shallots and a good seasoning of salt and pepper.

Perch, walleye, bluegill and smelt are all fish that anchor many Midwestern seafood feasts.

“During the summer months in Michigan, our attention always turns to fishing,” Latz says. “Michigan’s fresh waters have an abundance of fish species to sample from.”

Here are some of Latz’s best bets for putting local seafood on the menu:
-Yellow perch and bluegills: Beer battered and served with housemade tartar sauce.

-Smelt: Fried and used in a fish sandwich.

Another part of summer is the produce that comes from the Midwest’s short growing season. Zucchini, tomatoes, beets and more make their way into pickling jars, and it’s a good sign for the sweet corn crop when the corn stalks are “knee high by the Fourth of July.”

“Summer brings us the sweet treats,” Strotheide says. “Fresh strawberries in June, amazing cherries in July, then the sweet corn is poppin’, and then blueberry picking time…and then we make our way into fall.”

“Fall brings whitetail deer hunting season,” Latz says. “Nothing compares to venison in my book…there’s hardly any beef in my freezer; it’s all venison.” Here are a few of Latz’s favorite ways to cook venison:

-Venison tenderloin: Sautéed in butter with caramelized onions, this lets the famous “gamey” flavor of the deer shine through.

-Venison steak and eggs: Traditional morning meal for a day of hunting.

-Venison heart: Latz recommends trimming the heart, slicing thin and simmering with butter and onions, then using that mixture to make a gravy and serving over toast.

-Venison nuggets: Steak cut into nugget-sized pieces, breaded with saltine crackers and garlic salt, then pan-fried and served with salsa.

Winter: Time to use the canned harvest
“Winters here are harsh and cold, making it more difficult for people and animals to live off the land,” Latz says. “During winter, my family would hunt for rabbits and other small game and we did ice fishing. This is also when we would dive into all of that canned and frozen produce from the previous summer.”

Stews and root vegetables are key in the Midwestern kitchen during this time of short days and long nights.

“With its general life-sucking abilities, it’s hard to find much to like about winter,” Strotheide adds. “But at least we have spring to look forward to!”