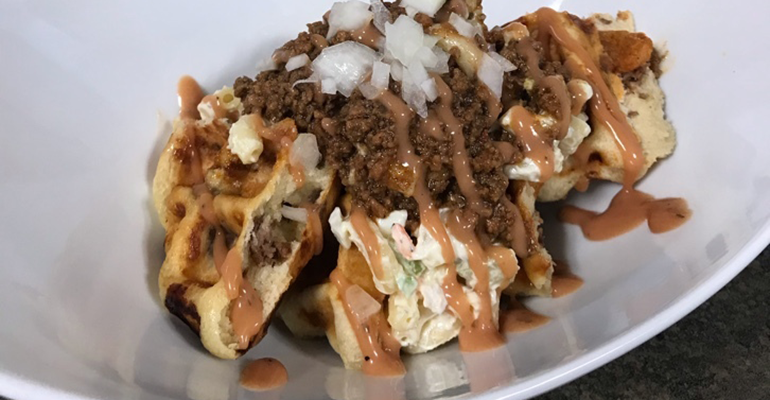 Operator shares how to sell the ‘garbage’

The garbage plate, which originated in Rochester, is especially counterintuitive in its name. Who wants garbage? But come to think of it, in this era with a focus on food waste, maybe the time is right for garbage plates to truly catch on.

“Far more appetizing than it sounds,” according to NewYorkUpstate.com, a garbage plate is “a platter of macaroni salad or baked beans, fried potatoes and some sort of meat (hamburger, hot dogs, chili, even fried fish).” The article goes on to recommend “the best way to eat it is either to starve yourself for a day and spend several hours chipping away at the massive plate of food, or it’s a great cure for even the toughest hangover.”

At Genesee Community College in Batavia, N.Y., Jessica Ferringer, executive chef with American Dining Creations, has refined the garbage plate into some cool menu items that are getting the students’ seal of approval, whether they’re from Upstate New York or not (or hungover or not).

Ferringer whips up garbage plates on request for special catered events, and recently, Dinner and a Movie Night was the perfect activity to break out the garbage plates.

“We do it the standard way [most often] but you can serve it with french fries or baked beans also,” Ferringer says. “And we do it as a loaded baked potato or as a loaded fresh-cut french fry option.”

Another update to the garbage plate is the “Willette waffle,” which starts with housemade Belgian waffle batter. “We fold in crumbles of fresh-pressed hamburger, home fries and pearl sugar and cook the dough in a waffle iron,” Ferringer says. The resulting waffle is topped with macaroni salad, meat hot sauce, chopped onion and a drizzle of creamy barbecue sauce.

“It’s messy, but the students enjoy it,” Ferringer says, adding that she’s traveled across the country for her career, but she’s originally from Fulton, N.Y., which is near Syracuse. Now that she’s closer to Buffalo, that region of New York has become more of a menu focus.

“We are able to do almost anything ‘Buffalo style’ and it will sell well ,and the students will love it,” she says. “From pizzas, strombolis, mac ‘n cheese to loaded Buffalo fries.”