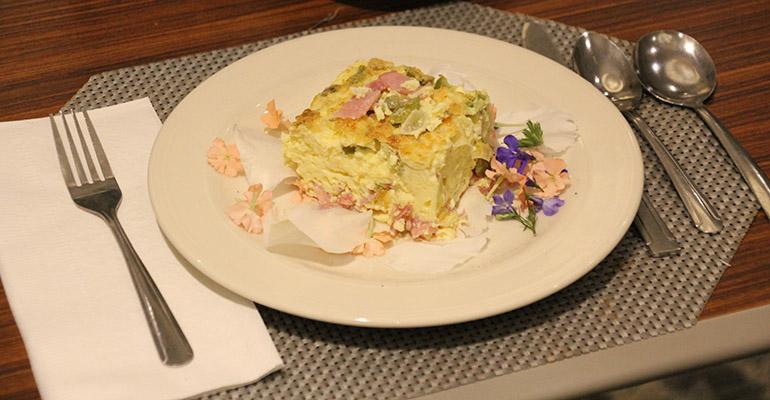 Your customers—and crew—will love the results of these make-ahead shortcuts and way-before-the-alarm breakfast hacks for when time is of the essence at morning rush.

A delicious, nourishing breakfast for customers trying to beat the clock each morning doesn’t just happen. To execute the most important meal of the day takes advance planning so that by the time the sun rises, the biscuits have already risen a long time ago. Here’s where make-ahead breakfasts really shine.

Chill out and just make chilaquiles

The retail menu by Morrison Healthcare at the Hospitals of Providence in El Paso, Texas, is influenced by the border region’s Mexican dishes and also the breakfast burrito love found throughout the state.

“We have a breakfast burrito bar with eggs, potatoes, chorizo…a bit of everything,” says Elsa Maria Garcia, patient services manager. And a couple of times a week, huevos rancheros makes an appearance. While both of those items are a bit more hands-on from a production standpoint, when you’re looking for a Mexican make-ahead breakfast, the answer is chilaquiles, Garcia says.

The traditional baked Mexican casserole is made with eggs and leftover tortilla strips as the main components, which only get better soaking up chili and chorizo flavor overnight. When the chilaquiles get baked in a large sheet pan, it’s easy to cut up individual squares for a fast, fiery breakfast.

Breakfast between the bells—for teachers too!

New this school year, Breakfast Between the Bells, a new breakfast service concept, debuted at one of the lowest breakfast participation locations, a high school in the Cincinnati (Ohio) Public Schools district.

“Despite being on Community Eligibility Provision (CEP), they were only at 11% breakfast participation,” says Jessica Shelly, director of food services at Cincinnati schools. When approached about making a major change to how breakfast was done at that school, “the principal was completely onboard.” 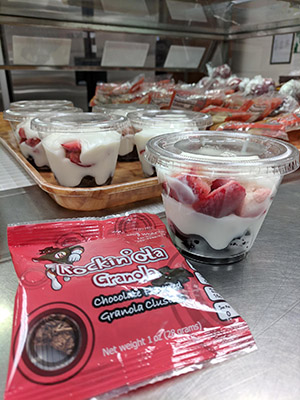 Photo: Breakfast between the bells.

So, on the first day of school last August, students now had the option after first period ends and before second period begins, to grab a breakfast item from one of six mobile carts set up throughout the school, courtesy of a USDA grant.

Eating while at desks in the classroom was met with skepticism at first from some teachers. Shelly says rather than listing (yet again) all the proven statistics of kids learning better when they’re well nourished, she offered a free breakfast to teachers so they could “lead by example.”

“Part of the grant money allowed us to offer second-bell teachers the opportunity to eat breakfast with students and be a role model for healthy habits,” Shelly says. “What’s been amazing is that we now have more teachers coming and buying lunch from us, too, since they’ve come to realize that the meals we serve are not only nutritious but delicious!”

Since the focus for the breakfast carts is portability and grab-and-go eating, many items offered are prepacked, like granola, or just need to be heated up. Staff come in each morning, warms those items in the ovens then sends them on their way, ready to make the morning successful for each student. Cold items, like yogurt-granola parfaits also make the grade for a quick-but-healthy breakfast.

Frittatas are a batch-baked breakfast from heaven 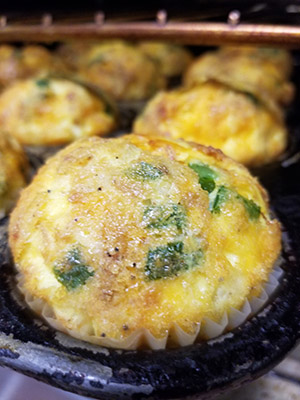 A Western omelet bake is one of the signature breakfast shortcuts, and it’s made with ham, onion, green bell pepper, eggs, American cheese and seasonings. What’s typically a hand-crafted, to-order item is now made in bulk, with plenty of time to spare and interact with residents during breakfast, one of the goals of having country kitchens. 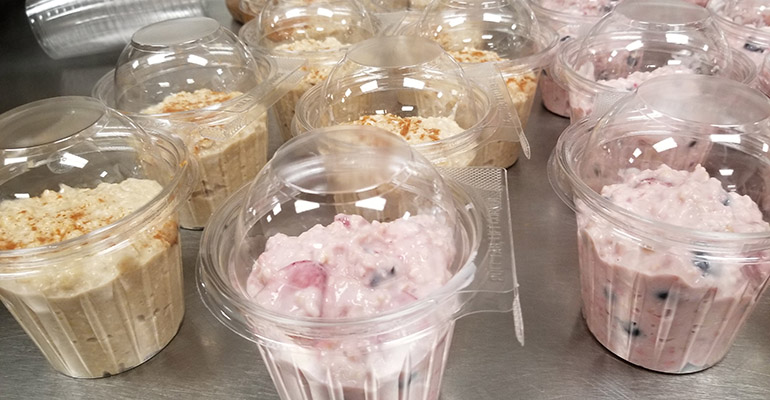 “Straightforward” is how Cheryl Fliss describes the overnight oats at Klingberg Family Centers, a K-12 alternative school and nonprofit multiservice agency in New Britain, Conn., where she’s foodservice director. She simply adds “oats, low-fat yogurt, milk and whatever fruit you are going to use.”

The beauty of overnight oats is in the possibilities of flavors they can take on. Apple pie (applesauce with a dash of cinnamon), peach (with canned peaches) and mixed berries (blueberries and strawberries) have all made the easy overnight oats anything but boring. The foodservice team also makes a French toast bake from a recipe Fliss found in the New School Cuisine cookbook, and some classic Martha Stewart-approved egg muffin cups with bacon, onions and peppers. 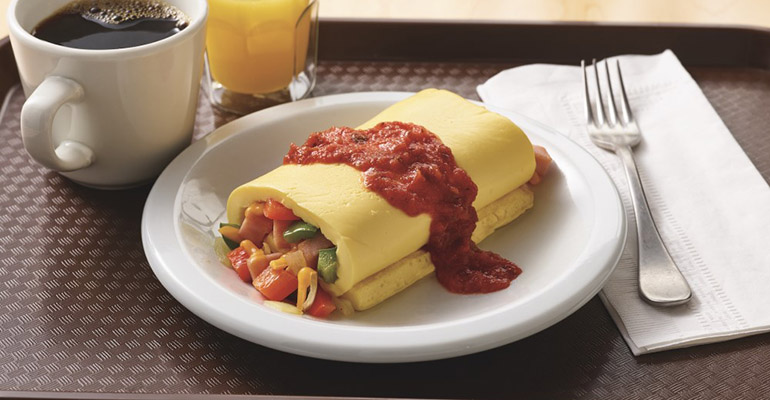 The image of customers chatting, mimosas in hand while standing in line for chef-made omelets makes sense for a leisurely brunch, but not so much for a student on their way to a final exam at Michigan State University (MSU).

So the MSU Dining team created a station that serves omelets with all the customization but none of the wait. Working with the American Egg Board, Executive Chef Kurt Kwiatkowski and crew began scrambling eggs, then pouring them into shallow pans for big rectangular sheets of eggs, which can be held warm and then filled with students’ choice of savory fillings, just like your traditional omelet.