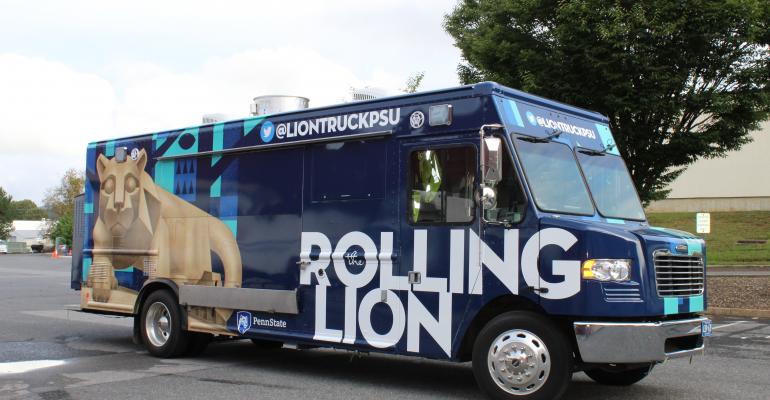 Start Slideshow ›
The Rolling Lion made its first appearance at Saturday night’s White Out game clash with rival Ohio State.

White Out games have become a tradition at Pennsylvania State University (Penn State) since the first one back in 2004, when it was confined just to the student section. For those unfamiliar with the phenomenon or who don’t much follow college football, a White Out is a home Penn State game, generally a night game, for which fans dress in white so that the stadium is a sea of white.

All that is accompanied by noise, a lot of noise that is designed to disrupt the opposing team’s composure and discipline, if not their hearing.

Penn State’s campus dining department is assisting in the effort with the rollout of its new Rolling Lion food truck, which debuted at the game and featured a number of White Out- and football-themed menu items.

Not to be outdone, Penn State’s campus Berkey Creamery is debuting its popcorn flavored White Out ice cream in the week leading up to the game.

Here’s a look at these special food-themed creations.