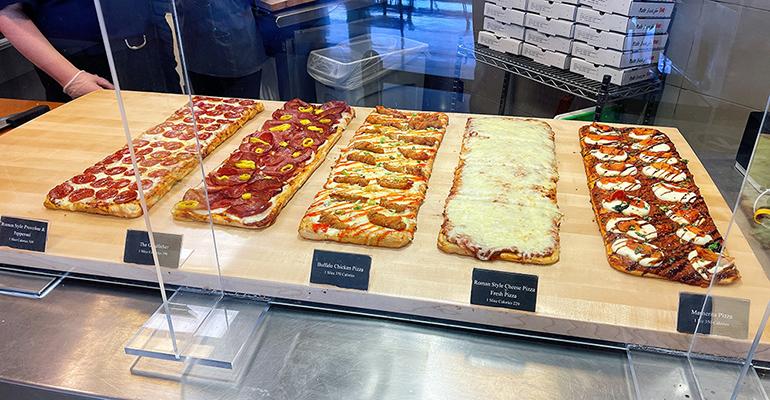 Chartwells Higher Education’s Wild Pie concept at the University of Toledo offers the “by the inch” serving style in which diners choose the pie while an attendant cuts the amount requested, allowing customization and a sampling of different pies.
Food & Beverage

Get New Haven-style, pizza-by-the-inch, hybrid NYC, focaccia and more into your pizza plan. Here’s your update on the trends and tech for delivering pizza perfection in today’s changing world.

Pizza sales have stayed strong during the coronavirus pandemic—$46 billion strong—and the king of delivery-friendly comfort food is a real menu MVP. That doesn’t mean pizza on the menu is a no-brainer, though. Incorporating trendy styles both new and ancient, meeting customers’ demand for tech and finding new ways to serve, customize and deliver incredible pies will keep your pizza game on the rise. 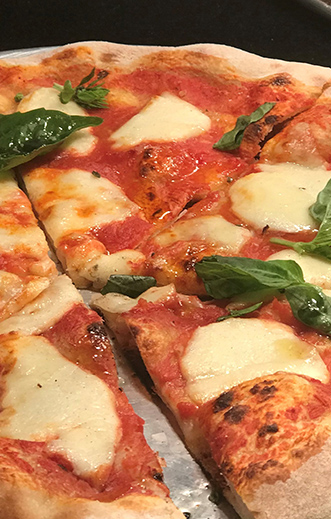 What is New Haven pizza? Known as “apizza,” it’s defined by Eater as “a hotter, crispier and dirtier descendant of Neapolitan-style pie.” It turns out both Neapolitan (the most famous, what you may know as a New York slice) and New Haven-style pizzas are currently a huge hit for Flik Independent School Dining.

Photo: New to the New Haven style of pizza? Brought to Connecticut by Southern Italian immigrants, this “apizza,” as it’s called, is not burned, per se, but rather “charred.” The difference is real! The smoky char once came strictly from coal, but present day, other ovens can achieve the char, too. This is Flik Independent School Dining’s version.

Related: Best Concepts: Pizza Pick Up program made the best of an emergency situation for school nutrition program

Flik’s Neapolitan recipe is made with 00 (double-zero) Caputo flour, a super-soft flour favored by pizza makers for its ability to turn dough tender and chewy, topped with San Marzano plum tomatoes and fresh mozzarella. This iconic, thin-crusted style has been shining in a new way on Flik menus: as personal pan pizzas. Could this be an idea with potential? The personal pan pizza as a solution to socially distanced dining.

For their version of New Haven-style pizza, Flik chefs begin with the same super-thin Neapolitan style, but make sure the oven puffs up the thin dough and chars it to the limit, especially around the edges. 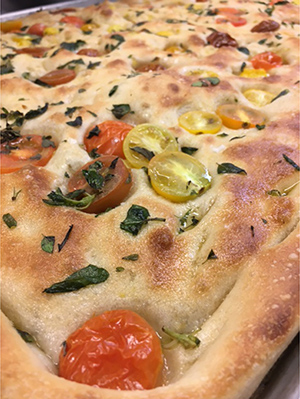 Restaurant Associates’ retail concept 181 Café at an account in Cambridge, Mass., has been offering hearth oven-fired focaccia served with a side for grab and go. This combo has been consistently selling out, according to Chef Leon Biscoe.

As a bread, focaccia is known as one of the most forgiving and best to start with for novice bakers. As a flatbread-style pizza, it’s offering the best of a sandwich and a slice of pizza: great toppings and so bready!

Photo: Restaurant Associates is making focaccia the focal point and a vehicle for many toppings, like these herbs and tomatoes.

Offering pizza-by-the-inch is one way to allow customers to sample a few different pies and customize the experience to their own craving meter at the moment. At the University of Toledo in Northwestern Ohio, Chartwells Higher Education’s Wild Pie concept features a Chipotle-style counter where an attendant scissors off just enough pizza for each customer.

Several unique pizza concepts are at home on the Duke University campus. Il Forno has experimented with many forms of pizza, from flatbread to Sicilian (thicker crust), calzone and Detroit (the melty-edged square pie). “During the pandemic, we have had to put our focus and emphasis on what travels the best for pickup and delivery,” says Il Forno’s Kyle Rosch, director of operations for Brenens Restaurant Group (which partners with Duke Dining). Currently, “we specialize in two types of pizza,” he says, “a New York-style pizza which comes in 18-inch size and can be sold by the slice or the whole pie; and our most popular option is our New York-Neapolitan hybrid pizza. This is a 10-inch pizza that gets a nice char to the crust and has a light, airy dough around the crust with a thinner inside.”

Photo: At Duke University, pepperoni will always rule (pictured here), but they’ve been experimenting with some out-of-the-pizza box breakfast pies and even shrimp ceviche.

Il Forno’s oven is custom made with both gas flame and wood-burning elements for both smoke and char. Usually, the oven is around 625°F, Rosch says. Also benefitting from that char: pepperoni, which becomes a “roni cup” with the round edges charred and the insides blissfully full of, well, great grease.

Pepperoni “will always be the No. 1 topping!” Rosch says, but he and the team have experimented way outside the pizza box with shrimp ceviche, Chicago-style Italian beef (based on the sandwich), Northern Mexican-style barbacoa, bananas Foster dessert pizza and even pasta on pizza.

Another Duke pizza concept at the Marketplace dining venue has also been holding steady with pizza for takeout, and a couple times a month, Chicago deep dish has made it into the rotation and earned some fans, according to Mark Turner, executive chef for Duke’s East Campus Dining. He’s also done breakfast pizzas with sour apple and brie, a mac ‘n cheese pizza and also a chicken tikka masala pie.

The new technology of pizza

Is it a matter of time before pizza making goes A.I.? Maybe. Before you see a pizza-cooking robot, though, you may see a heated, personalized food locker, posits Sodexo’s tech guru, Kevin Rettle, who is overseeing Sodexo’s contactless efforts.

“The technology is very rapidly developing; I firmly believe the adoption rate [of new technology] is based on utility and not novelty,” Rettle says. “There are robots that help with the production and robots that are more guest-facing. We’re exploring both.”

Another piece of the puzzle is food lockers, something Rettle and Sodexo have found great success with across all the segments, especially college and university. “We’ve deployed pickup lockers and it’s become a high adoption rate. I think a lot of it is driven by COVID and people not wanting to interact.” 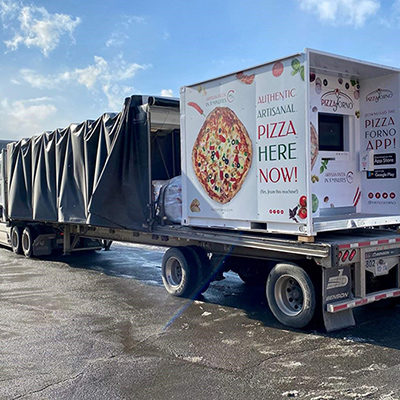 Photo: A PizzaForno unit is delivered. This kiosk can make pizza by itself in three minutes flat.

Rettle says pairing pickup lockers with customization—preordered through an app—is a win-win. “The technology has become fairly seamless and quite intuitive for today’s students—who have had a phone in their hand since birth. It’s ‘automat’ style, but there are more ways to ‘make it mine,’ fully customized, that’s the big trend right now.”

Meanwhile, pizza automation is making itself known in Michigan, where pizza tech company PizzaForno is planning to open automated pizza ovens/vending machines that can bake artisanal pizza in under three minutes and comes with eight staple menu items. These compact kiosks will debut at the Detroit Henry Ford Medical Center for hospital staff, patients and visitors and another later this year at the University of Michigan.