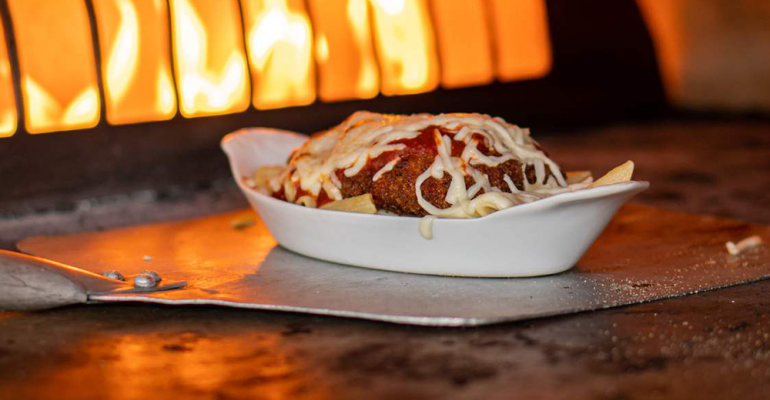 FSU’s Tuscan Grill is literally a campus “hot spot,” thanks to the stone oven, where preassembled chicken Parm gets fired up.
Food & Beverage

Whether or not you ever had an Italian nana, the rustic chicken dishes of Italy can make you feel at home and cared for. There’s something about the slow-simmered, cozy aura of a chicken cacciatore, or that satisfying cheese pull on chicken Parmesan.

Luckily, the leap from grandma’s kitchen to onsite foodservice isn’t too far at all. Both focus on family style, lots (and lots) of portions and a hearty, heart-warming effect. Here’s how a few onsite operators are bringing nana’s cookbook into their kitchens.

Chicken cacciatore, aka “hunter’s stew,” is a rustic dish of chicken braised in a tomatoey sauce with veggies. There are parallels to be drawn there between cacciatore and a Kentucky burgoo, another hunter’s stew, according to Chef Andrew Klipsch, GM at the University of North Texas’ Bruceteria dining venue.
But for Klipsch, chicken cacciatore primarily conjures memories of his childhood farmhouse in Indiana, where “I was the youngest of six,” he recalls. “It was just a bunch of teenage boys eating all the time. Chicken cacciatore is a really good family meal.” 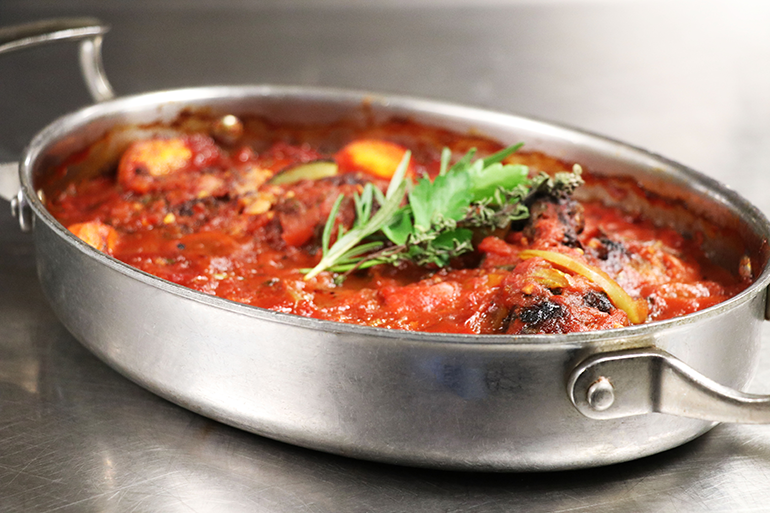 The hallmark of a great chicken cacciatore is the deep, red color of the sauce, as shown here at UNT’s Bruceteria. And chef Andrew Klipsch, GM of Bruceteria, uses a tilt skillet to make the dish. 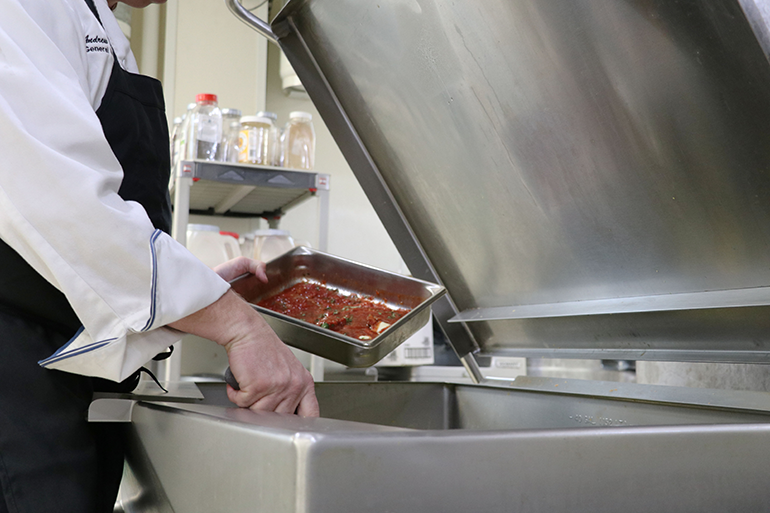 “Family meal” translates into high-volume foodservice perfectly with this dish, and Klipsch incorporates a tilt skillet for this one-pot meal. Searing chicken and garlic in oil, adding onions, carrots, zucchini and aromatics, then adding canned or fresh tomatoes and letting it cook “low and slow and just kind of leave it until it’s done,” is Klipsch’s method. “You want the tomatoes to get this really rich dark color.”

Cacciatore can also be a catch-all for unused portions of rotisserie chicken at Bruceteria.

“We utilize our rotisserie quite a bit and this is a great way to incorporate any unused portions into another dish that’ll be enticing and healthy,” Klipsch says. And when using fresh whole chickens, “it’s very portionable. You can cut the chicken down into 12 pieces to make single portion sizes.”

“I’ve seen a lot of people do it without the bone, but I don’t think it has the flavor,” he says, adding that there are lots of different bases to serve cacciatore upon, making a complete hearty meal: “You could do nice really garlicky, buttery mashed potatoes, and that’s my favorite, or you could put it on farro or it would be wonderful with quinoa. You can go a lot of different ways with it because it’s a traditional peasant food, but it’s pretty, it has a lot of flavor and it’s economical.”

Speaking of “portionable,” (which for some reason isn’t a word, but should be!) middle school students at Gwinnett County (S.C.) Schools recently got individual portions of chicken Alfredo on top of penne pasta, something cooked up by Karen Hallford, MS RD LD, director of school nutrition and her crew.

The cute chicken Alfredo bowls were made with precooked diced chicken with garlic-Parm flavoring placed on top of pasta in Alfredo sauce. Gwinnett’s foodservice team posted a cool video on its Facebook page, properly getting the hype started for this new homestyle dish. 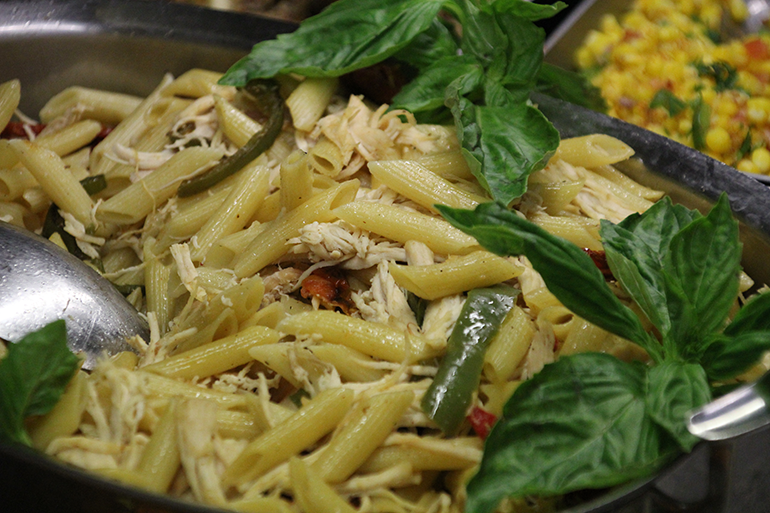 In America, chicken Parmigiana or chicken Parmesan is abbreviated into chicken Parm more often than not. In Australia, it’s known as “parma, parmi or parmy.”

Fun facts aside, it would be easy to overlook chicken Parmesan as an “it” menu item. But that would be a mistake indeed. The chicken Parm is one of the best-sellers on the menu at Seminole Dining’s Tuscan Grill at Florida State University (FSU) in Tallahassee.

“We do prep about two days ahead because we go through so much,” says Lakeisha Troupe, chef with Sodexo at FSU.

That includes tossing chicken in flour, egg wash and panko then frying until crispy. For service, the chicken is topped with housemade marinara sauce and mozzarella, “then we throw it into the fire,” Troupe says.

Tuscan Grill’s stone oven is a huge selling point for customers, she adds, “it’s really attracts them and they’re in tune with the fact that it’ll be hot and fresh.”
Pizzas are the only item that generally outsells the fired-up chicken Parm, an item that Troupe thinks does so well because of its homestyle vibe.

“For the students, it’s really great because they remember mom cooking it and it reminds you of being at home,” she says.

In a 2010 interview with NPR, famed Italian cookbook author Marcella Hazan shared her thoughts about coming to America in 1955 and being in a state of culture shock at seeing processed foods, so different from Italy, where fresh produce and meats were a given.

“I never saw a supermarket in Italy,” Hazan told NPR. “The chicken, they were arriving from the farmer and they were alive. And at the supermarket they were very dead; they were wrapped; it was like a coffin. Everything was not natural.”

This disconnect led her to write some of the culinary world’s most revered Italian cookbooks, to allow Americans a taste of what was missing.

Hazan’s best-known chicken recipe is an ultra-simple-yet-hauntingly-precise roast chicken with lemons inside, the skin a gorgeous ochre color and the juices succulent as can be. This chicken dish “went viral” before that was a thing, when a women’s magazine published a letter from a reader who made the recipe and her boyfriend proposed. From then on, the chicken was known as “Engagement Chicken.”

While not quite as famous, Hazan’s chicken filets with lemon and parsley (a close cousin to chicken piccata, minus the capers) is a great way to use chicken breasts alone in Italian cooking, without sacrificing flavor. In a technique that would be magic at a display cooking venue, the sauce for this chicken is a pan sauce made by scraping up the brown bits from the chicken and deglazing the pan with lemon and butter. As food blog Pop Up Cooks commented, “Some of the recipes in [Hazan’s book Essentials of Italian Cooking] seem just too simple and easy to be true and this sure is one of them.”

Italian chicken meals as a sandwich

One of the great things about the sandwich’s considerable role in food service is the ability to take a meal and make it grab-and-go-able.
American Dining Creations’ sandwich concept, Which Street Deli, features lots of “meals made into sandwiches,” such as the chicken piccatini, a mashup between chicken piccata and a panini. Some creative liberties have been taken: Garlicky spinach isn’t a traditional component of piccata, but it’s certainly welcome in a chicken sammie.

And chicken Parmesan becomes an intensely craveable sandwich by Gott’s Roadside, a small Northern California restaurant chain with a new location inside the San Francisco International Airport. While not yet available at the airport location, the chicken Parmesan sandwich is a menu item that just debuted, featuring buttermilk-marinated chicken breast, breaded and fried crisp, served with housemade tomato sauce, fresh mozzarella, Parmesan and basil on an Italian roll, which is then pressed.

Another option: Open up Italian chicken sandwiches into flatbread, as shown here, created by Tyson.