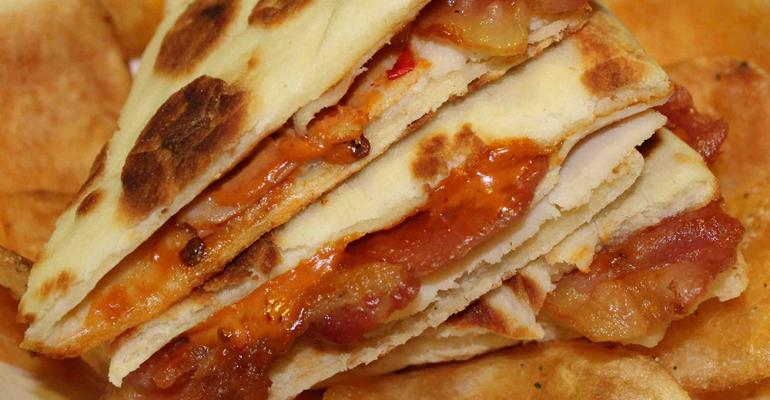 Sandwiches with “must have” status

How do you create a sandwich that crosses from lunch special into “we can never take this off the menu” territory? From ingredients that wow to bread that’s bliss and cheesy sauces that melt over the whole thing, chefs have some crafty ideas on what makes successful sandwiches.

Sandwiches are the backbone of the grab-and-go world mainly for their practicality: a portable device that allows customers to get on with their busy days.

But creating a menu item that’s more than just getting from point A to point B (hungry to not hungry)—for customers to actually get excited about during those busy days—is an onsite foodservice operator’s chance to shine.

These sandwiches, whether they’re carnivore-friendly or veggie-centric, are all about that X factor that makes customers ask for them…and raise a ruckus if they ever did get taken off the menu. One reliable method for making an irresistible sandwich cited by chefs everywhere? Melt it. A simple ham and cheese can become something entirely different after a squeeze in the panini press or a trip through the impinger oven. At SUNY New Paltz, the most popular sandwich (and best way to start the day) is a melty grilled cheese with eggs and bacon (above), served at Element 93, a concept named for the 93rd element on the periodic table, Neptunium (NP), which also stands for New Paltz.

Heating things up has also worked well for the turkey pub club at the University of Mary Washington’s (UMW) retail location, the Underground. This sandwich has been the Underground’s top seller for seven years, accounting for about 40 percent of all sandwich sales there, with layers or roasted turkey, cheddar cheese and crispy bacon wrapped in naan and toasted until it’s GBD (golden brown and delicious).

“When we were considering making some menu changes at the Underground, we did a survey to see what new foods students wanted added and which existing menu items they wanted to keep,” recalls Rose Benedict, marketing manager at UMW. “Every student responding to the survey listed this sandwich as the one that must be included on any new menu.”

Likewise, a toasty meatball sub with marinara sauce and melted provolone cheese at Alderson Broaddus University in Philippi, W.Va., has been deemed a “do not take off of the menu” sandwich, according to Wayne Coller, chef-manager.

Newly introduced Rossi’s vodka chicken parm sandwich (below) is already a runaway hit at Marist College in Poughkeepsie, N.Y. While the Rossi’s concept is new at the North End dining venue on campus, Italian deli Rossi & Sons Rosticceria has been a favorite in Poughkeepsie since 1979. The local partnership has allowed students to experience this breaded chicken on housemade focaccia (baked every day) with fresh melted mozzarella and Romano cheese dipped in vodka sauce before being sizzled in a panini press. Students can customize this ‘wich too, with toppings such as roasted red peppers, prosciutto, hot peppers, arugula, banana peppers and spinach. And this is a sandwich that’s more than enough for an entrée, available in 7-inch or 9-inch size (the bigger size contains almost a pound of chicken!). SAGE Dining Services landed a new account based in part on this plant-based sandwich: grilled portobella and feta on focaccia. Focaccia’s airy texture makes it perfect for cutting into squares.

The tuna melt served throughout the Sweetwater Union (Calif.) High School District is “something simple we can throw on the grill now,” says Eric Span, director of nutrition for the district, referring to new outdoor grills at some of the schools. The tuna melt starts with tuna from a pouch, mayo, mustard, herbs and a little onion blended together on whole-wheat sourdough and topped with cheese then grilled until melted. “You’ve got this smoky bread, and beautiful tuna and melty cheese, and it meets nutritional guidelines,” Span says.

The chicken salad sandwich on sourdough has been a sleeper surprise hit at Liberty University, in Lynchburg, Va., where Michael Lowe, CEC, retail dining executive chef attributed the positive reaction to the surprise hit of heat in the mayo that binds the chicken salad.

“It looked to be a simple chicken salad sandwich, but the recipe included just the right amount of jalapeño juice and white pepper,” Lowe says. “That gave it a little kick, not in a super-spicy way, but in a way that made it addictive. Then, I paired that with a pesto mayonnaise.”

Sauces, mayos and aiolis steal the show with flavor

What’s a sandwich without the need for a few napkins? Slather on that sauce!

The KBQ (Korean beef barbecue sandwich) from American Dining Creations is described by the marketing team as “just messy enough” with its drizzle of sweet chili sauce on the bun. That final touch takes the barbecue beef-Asian slaw-garlicky onion-crispy carrot stick sandwich over the top.

Sauces can take center stage with a sandwich, as in the open-faced Hot Brown at Rutgers University (see Rutgers' sandwiches below) and also the breakfast fried tomato biscuit sandwich (below left) from PantherDining at Georgia State University, by Cameron Thompson, chef of catering and retail. The biscuit can be served with or without bacon, and the housemade pimento cheese brings an unmistakable taste of the South to this ‘wich. With Middle Eastern cuisine trending now, it’s a worthwhile idea to consider hummus as a sauce that adds something different, and it’s healthier than mayo. A grilled lamb pita with thick-sliced tomatoes and onions with fresh hummus became a top seller at Liberty University’s concessions operation.

“Even people who were a little skeptical about lamb on a sandwich just ripped it up and asked for another the next time they came to an event,” Lowe says.

And sometimes, it can pay to keep it simple with sauces and spreads. While aioli in out-there flavors can certainly make a statement, Jamie Baribeau, director of food and nutrition at Brattleboro Memorial Hospital in Vermont, says plain mayo is the way to go when it comes to the signature BLT—at its best when local tomatoes are at their ripest.

Rutgers’ Superior Sandwiches: It’s all in the details

The Gateway Café dining hall at Rutgers University is basically a sandwich flavor lab that invents (and reinvents) distinctive ‘wiches, including these three popular choices, stars in the menu cycle and also available for catered events by the dining team. The details—crunchy potato chips, stir-fried veggies or a creamy cheese glacage sauce—make all the difference. • Save the Planet sandwich: The “meat” of this ‘wich is a hearty grilled portabella mushroom, topped with julienned zucchini, yellow squash, carrots and broccoli that’s been stir-fried with fresh-grated ginger and garlic, then tossed with soy sauce and Tabasco and folded into a flat pita with some fluffy sprouts. • Turkey Hot Brown: This sandwich has roots in old Kentucky, and an “ugly delicious” look that’s definitely on the drab side photo-wise, but totally on the delicious side flavor-wise. This sandwich features house-roasted turkey breast sliced thick and served open face on a buttermilk biscuit with bacon and a cheese glacage (glossy French sauce), which is béchamel combined with shredded cheddar, heavy cream and Hollandaise. • The Wipeout sandwich: A ciabatta roll is the base for this sandwich with strong meat elements, with roasted pork shoulder and beef top round and equally strong veggie components including shredded kale slaw with julienned carrots, shredded cheddar, seasoned rice vinegar and olive oil. Potato chips bring the crunch factor, and “Rutgers’ Famous” chipotle mayo ties it all together.