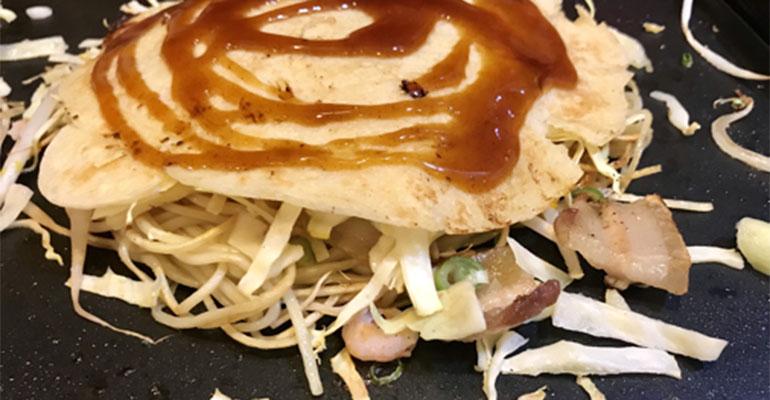 The savory Japanese pancake you need to try now

Perfect for an action station or on the line, okonomiyaki is the crepe/omelet/pancake/craveable anytime snack your menu has been waiting for. See how Boston College is embracing this street food item. Plus, get the recipe.

The new Hiroshima concept at Boston College features okonomiyaki, a savory pancake that’s been gaining lots of new fans since it opened less than a year ago.

Okonomiyaki captured the attention of Derrick Cripps, GM at BC’s Corcoran Commons, when he was in research-and-development mode, looking for inspiration from world street foods.

“One of the managers on our team here had just spent some time in Japan, and she said she loved them,” Cripps found when he started talking about his idea. A lot of the ingredients necessary for okonomiyaki were already present in the Corcoran Commons kitchen, so Cripps knew he had a good idea on his hands, one that many students probably hadn’t tried yet.

“We hadn’t had any requests for them from students,” he says, “but we usually like to try and stay ahead and keep trying out new concepts.”

Okonomiyaki dovetails nicely with the enduring customization trend for college students, whether or not they’ve tried this item before. The word okonomiyaki translates to a variation of “as you like it” or “have it your way,” and there are many winning combinations to be had with the addition of shredded vegetables (usually cabbage) and any protein or condiments you can dream up.

The Hiroshima-style okonomiyaki—which Cripps chose to emulate—differs from other version because the ingredients are layered rather than mixed into the pancake batter. (Think of it as more of a crepe with ingredients gently folded inside than a blueberry pancake with ingredients uniform throughout). The Hiroshima style also incorporates noodles—no complaints here!

The only special piece of equipment the BC dining team needed to start making okonomiyaki was a set of the must-have type of spatula needed for this dish (wide, with a shorter handle, resembling a dust pan), and the station was off and running.

The recipe is so forgiving and variable that Cripps doesn’t worry too much about not making the crispy little pancakes perfectly traditional.

Still, “we’re trying to keep the concept as traditional as possible, though in reality, okonomiyaki varies widely across Japan, even those you’d get on the same street,” Cripps says.

Get an okonomiyaki recipe here, and remember to change it up “as you like it.”