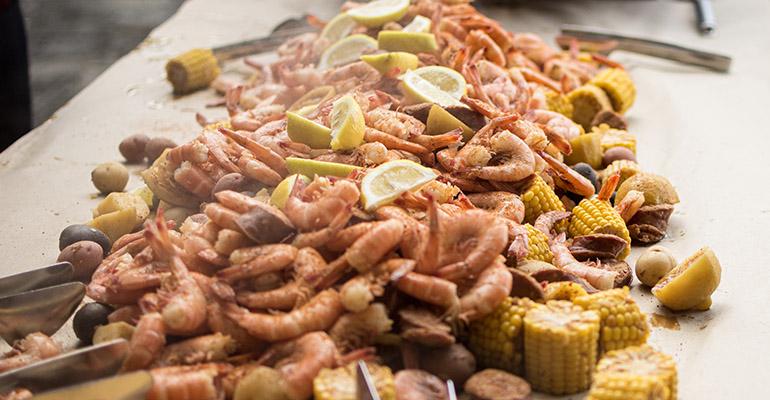 Small but mighty, shrimp is the seafood your customers love to order. Here’s how to dip into deeper, bolder flavor for shrimp dishes that truly sizzle.

As the crustacean to crave, shrimp is a go-to for you customers who are just dipping their toes into ordering seafood from the menu. Since it’s a safe choice, shrimp is a good opportunity to pump up the flavor with cool ingredients, succulent sauces and sweet new applications.

So many cultures use shrimp in their cuisine, whether it’s a New Orleans po’boy, a smokin’ Thai shrimp curry or a Low Country shrimp boil from the coast of South Carolina. Different cooking methods, from grilling to boiling to pan frying to deep frying and more allow for the shrimp’s texture to change depending on the style the chef wants to infuse. Check out these sizzling shrimp dishes for some shrimp-spiration. 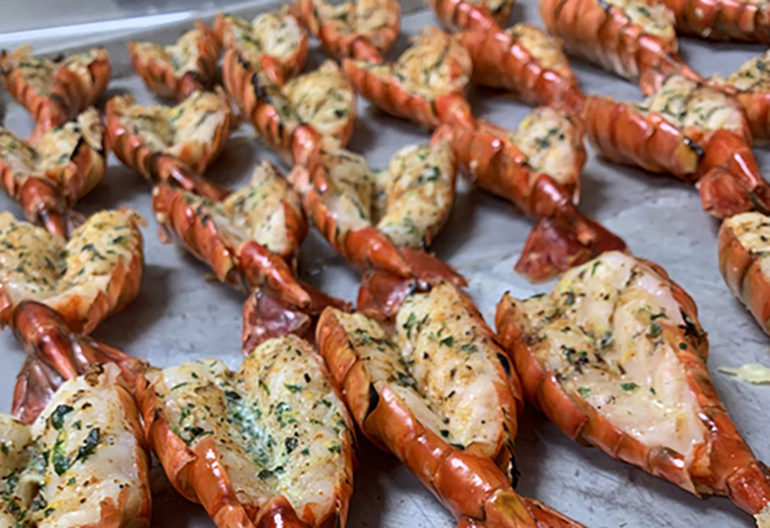 “As I was sending options for the ‘surf’ part of surf and turf board dinners, the idea for bacon-crusted shrimp came to me by way of cooking oysters for years,” Spence says. “It’s a spin on the classic dish oysters casino.” 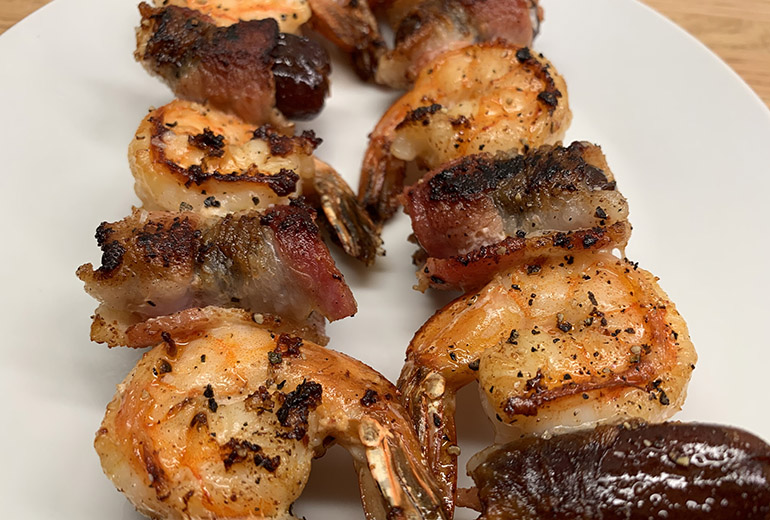 Spence’s inspiration for citrus-herb shrimp—another ‘surf’ regular—came from his “love of combining fresh herbs and citrus with all seafood,” he says. Citrus-herb shrimp are seasoned with salt, pepper and Old Bay seasoning, then grilled. When they’re nice and sizzling, they’re hit with a compound butter consisting of lime, lemon and orange zest, parsley, thyme, cilantro and garlic then finished in a hot oven for melting, buttery perfection.

Grilled shrimp on a skewer is not just logistically sound—the cooking vehicle is also the serving vehicle—it makes for a great looking plate. That’s the case at Taylor University in Upland, Ind., where Creative Dining Services Chef Nathaniel Malone has gotten bold with shrimp kebobs. Assembled with chorizo-stuffed, bacon-wrapped dates (aka, devils on horseback), fried polenta and grilled shrimp, these kebobs are served with green onion chimichurri. 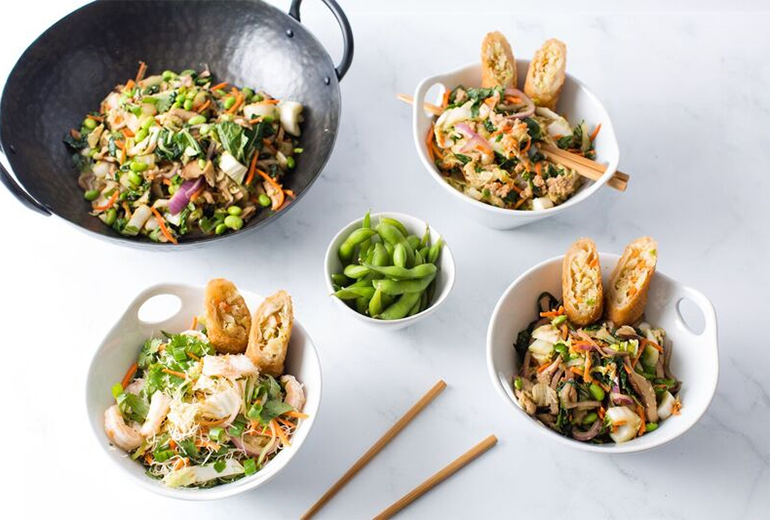 The Morrison Healthcare corporate culinary team has been working on a new shrimp-centric concept slated to launch in the new year, a paleo pop-up called Egg Roll in a Bowl. Accounts will have the option of adding shrimp to a deconstructed egg roll or spring roll.

Morrison is no stranger to shrimp, however. Spicy Thai shrimp and green apple salad served as a bold LTO in September to feature promoting apples. The crispness of apples and the pop of shrimp are a match made in heaven.

And Morrison’s micro concept and guest restaurant programs feature shrimp in a variety of ways: shrimp po’boys, barbecue Cajun shrimp and shrimp gumbo are all stars at the Bayou micro concept.

Bowls are definitely a healthy eating trend that’s shown its staying power. At Duke University, The Chef’s Kitchen (which serves as a pop-up restaurant during lunch) has been serving The Big Bowl menu, which offers Mediterranean influence with local and seasonal ingredients. The sautéed shrimp bowl features artichoke-kalamata olive salad, pickled banana peppers and a Greek vinaigrette, giving the shrimp huge flavor vibes.

Also at Duke, jumbo prawns are paired in a classic way with bucatini pasta and broccoli rabe in a sauce of white wine, butter and Parmesan. 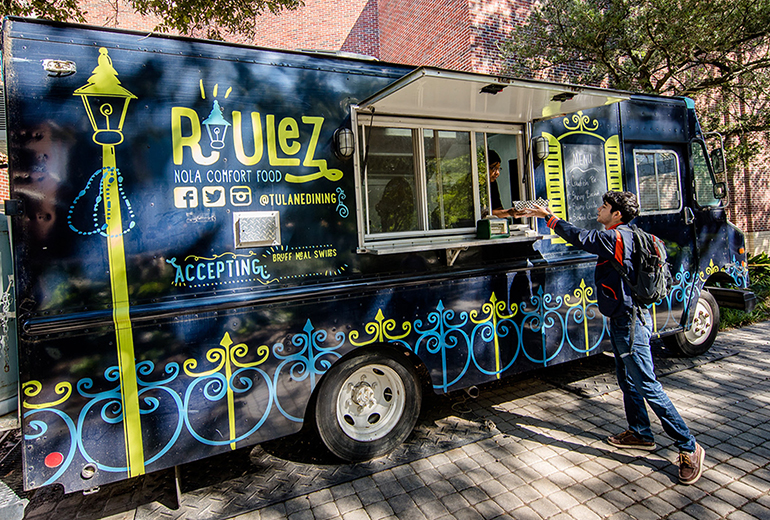 Po’boys also show up at Saints games at Mercedes-Benz Superdome, where Centerplate chefs are preparing these signature sammies by the hundreds. Not stopping there, shrimp also shows up in Centerplate’s New Orleans crawfish nachos, with crawdads and shrimp in a gumbo-esque sauce atop a giant bed of nachos. 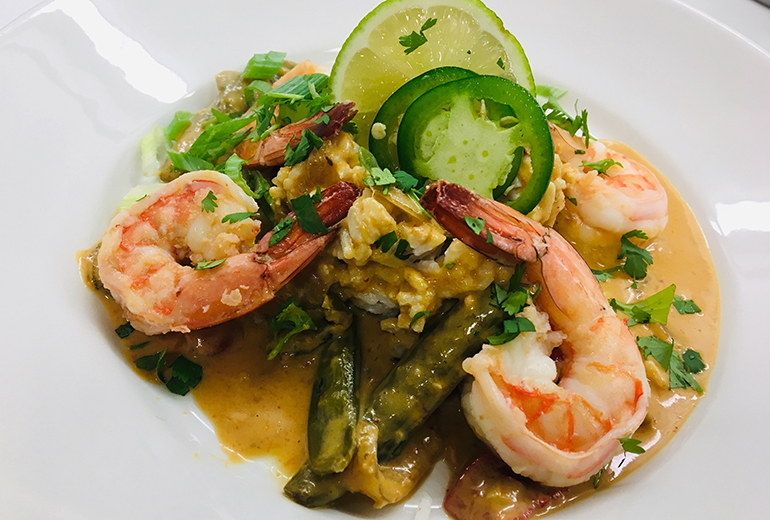 The sweet flavor of shrimp stands up beautifully to Thai’s bright, bold, sometimes-spicy flavors. At Texas Christian University, Sodexo Executive Banquet Chef Rashelle Solano sizzles up fresno chilies, onion, bell pepper, ginger and garlic. To that, she adds coconut milk, red curry paste and fish sauce. This makes a perfect backdrop for shrimp on top and rice underneath. Jalapeños and limes, both cut into wheels, garnish this Thai treat. 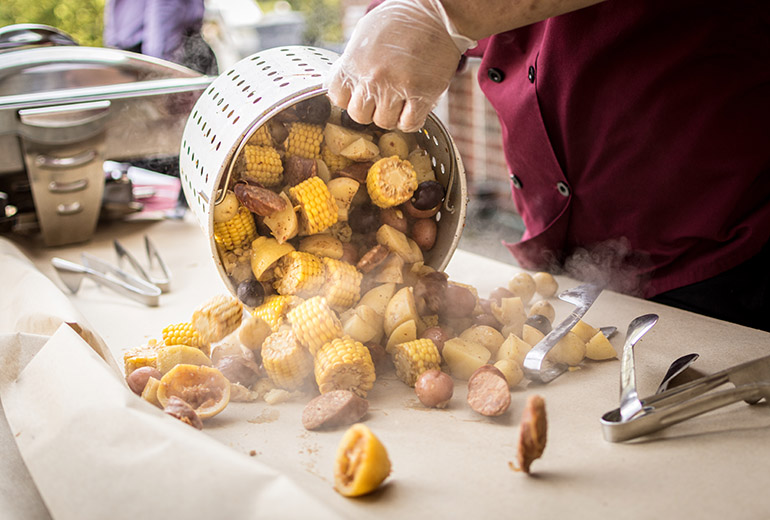 Low Country boils are a casual, fun, down-home way to do an event for lots of people. Seafood, along with corn and potatoes, is boiled, poured out and devoured. While it sounds simple, the details are what makes an awesome Low Country boil.

At Elon University, Harvest Table Culinary Group puts the emphasis on local ingredients for Low Country boil pop-ups held around campus. Local corn, local sausage and, of course, local shrimp are all part of the mix in these events that encourage students to roll up their sleeves and dig in. 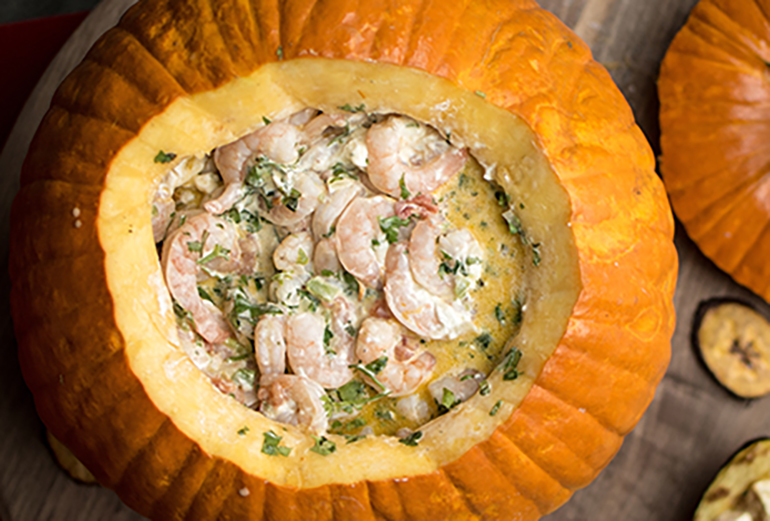 Fried shrimp is pretty much heavenly. But what if your guests want a healthier option or a gluten-free option? Delaware North Chef Josh Ingraham, at Cleveland’s Progressive Field, participated in a Chefs Roll promotion with Potatoes USA and created a great “fried” shrimp compromise that omits both the deep frying and the flour/traditional breading. 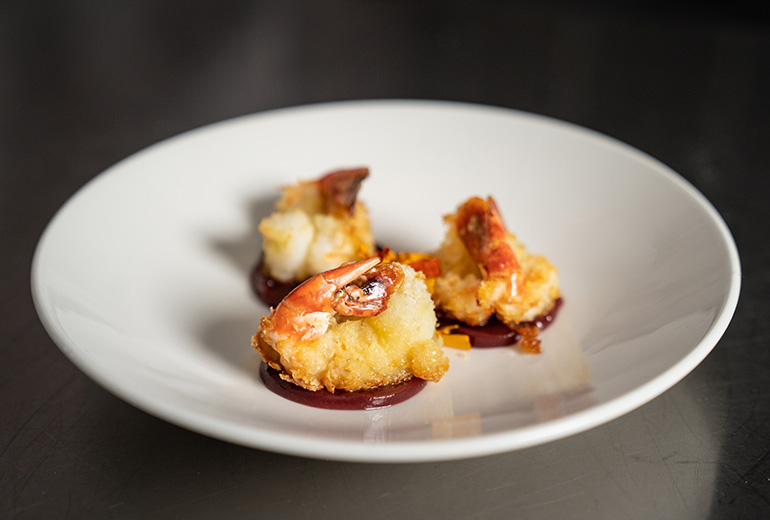 Coconut and potato crusted jumbo shrimp with blood orange curd was the result, and it’s deliciously simple to make.

“Instead of deep frying, we pan fried then finished the shrimp in an oven,” Ingraham says. “By substituting flour with coconut flour, we were able to make it gluten-free and also gained subtle coconut notes in the dish and the blood orange curd was the perfect complement.”