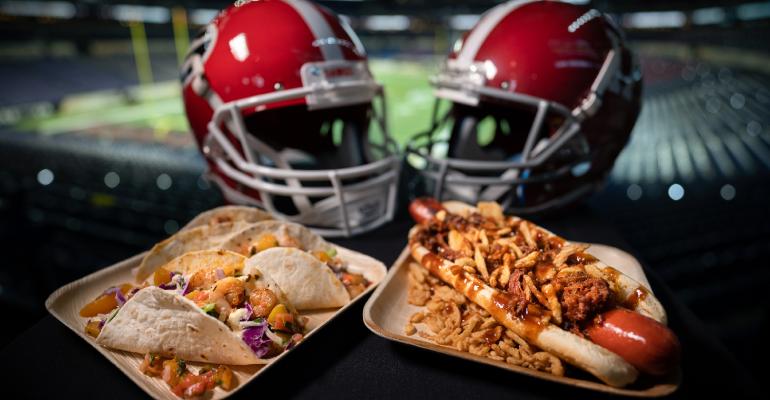 Sodexo Live!, the company operating concessions at Lucas Oil Stadium in Indianapolis, is planning a menu featuring a pair of specialty items themed specifically for the college football national championship game between SEC powers the University of Alabama Crimson Tide and University of Georgia Bulldogs. The items will be available at multiple general concourse locations throughout the stadium, while team-themed cookies will be served in the premium spaces.

Other Indy-inspired menu items to be featured at the Game on Jan. 10 include…

Related: What Sodexo Live! will be serving at the 2021 Grey Cup

• a Hoosier Fried Chicken Sandwich with pimento cheese on a fresh-baked brioche bun.

• non-meat options like ancient grain bowls, bell peppers loaded with plant-based meat and a sweet chili glaze, and several salads will also be on hand.

Visiting fans have been in for a weekend's worth of events and activities scheduled for the Playoff Fan Central at the Indiana Convention Center, where Sodexo Live! curated new additions to its menus, including the Crimson Tide Dog that will be featured at the game, and a special edition of Bulldog Brisket Sliders.

Sodexo Live! is hosting the CFP National Championship for the third straight year, after previous editions (operated under the unit’s former name, Centerplate) at the Caesars Superdome in New Orleans in 2020 and at Hard Rock Stadium in Miami last year. Again this year, the company will donate prepared but unused food to local charitable organizations, including Second Helpings and Gleaners Food Bank of Indiana.