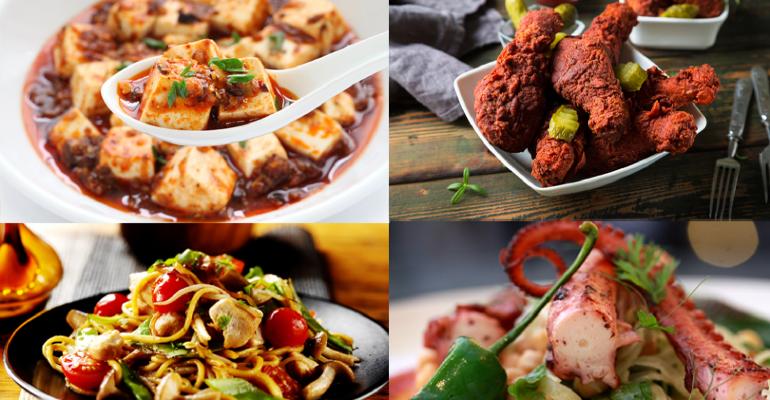 Start Slideshow ›
Datassential’s State of the Menu report reveals which parts of the menu took a hit, which items were pandemic-proof and which trends and flavors are poised to rebound and then further accelerate, from Nashville hot to gochujang to jalapeno poppers, cauliflower pizza crusts, noodle bowls, plant-based products and more. Plus, which spice blend is the hottest of them all?

While the word “unprecedented” continues to pop up when taking a step back to analyze trends, there are some definitive directions in terms of trends to watch and comeback stories waiting to be told.

Datassential’s Jack Li and Carly Levin shared those trends in Datassential’s annual State of the Menu event, which aims to find out what’s happening at “a macro level, a deep meta-analysis, holistically and systemically,” Li says.

Datassential’s tool for tracking menus, Menu Trends, keeps tabs on menu mentions all over the country in good times and bad, but looking at pandemic data has stopped researchers in their tracks.

“Like a meteor smacks the earth and this is the aftermath: An unprecedented decline among several flavors and ingredients,” Li says. “A massive number of things are down more than 2%, which is totally unexpected. It’s so unnatural.”

Menu Trends has revealed that menus have gotten smaller, for instance, but maybe not as much as trend watchers suspected. Datassential’s deep dive revealed that menus shrunk by 10.2%, significant, sure, “but nowhere near the 50% numbers some us may have had in our head,” Li says.

A similar menu shrink happened during the economic downturn of 2009, but nothing as widespread as this. This time around, “60% of menus got smaller,” Li says. “That is unprecedented. It’s been a true systemic shock to the system. When you have something that gets hit that hard that fast, what does that imply for the rebound?”

Now for some good news, according to Li: “I think it forecasts a better and more rapid restoration than normal and a period of growth ahead.”

Overall, Datassential predicts menus will grow as operations restore, pre-covid food trends will resume and global influences will continue to grow. Here are some more fascinating facts and numbers revealed at the State of the Menu event: