Long before the brewery boom, which Cleveland has embraced just as hard as other cities, there was the Great Lakes Brewery, which first opened its doors in 1986, making it positively venerable in the local brewery sphere. Found on tap on the ballpark’s first level are iconic Great Lakes beers like Lake Erie Monster, Holy Moses White Ale and the Cleveland Indians-themed Rally Drum Ale. Food offerings at Great Lakes include the Po’Man, a sausage and pierogi sandwich with brown mustard.

New foodie neighborhoods—complete with culinary hot spots and food halls—are growing to the west of the city, visible here in the distance. Local restaurants partner with the Delaware North team to bring their special flavors to a different audience.

The Fat Rooster is new this year, featuring just a few items with a lot of flavor.

From up north
Tara Fitzpatrick

Brisket poutine is also available at The Fat Rooster.

A quirky-cool Cleveland hangout, the Happy Dog, also has an outpost at Progressive Field, tucked into the main level, making it easy to get a totally memorable hot dog, such as the Killer Kilbane, with “alien pickle” relish, chunky peanut butter and Sriracha. Happy Dog Chef and Cleveland culinary pioneer Eric Williams’ other restaurant, Momocho (modern Mexican food on Cleveland’s near west side) also has a presence at the park, serving items like chicken nachos with fresh corn chips and queso fundido.

We told you Cleveland had a lot of breweries. Fat Heads Brewery, which first opened in rival city Pittsburgh in 1992 then branched out into several Ohio locations in the last decade, is serving not just beer, but also sandwiches like the Southside Slope, with kielbasa, fried pierogi, American cheese, grilled onions and horseradish sauce.

A sense of place

Other local concepts found throughout Jacobs Field include Melt Bar and Grilled, which has several locations to the east and west of the city; Sweet Moses, a soda fountain and treat shop in the Gordon Square neighborhood; Cleveland chef Zack Bruell’s Dynomite Burger (featuring fancy burgers named for and inspired by several of his restaurants); Forest City BBQ, which partners with Montgomery Inn, a Cincinnati-based barbecue business; Barrio, a local taco/nacho haven; Cleveland Kraut, a hotdog stand by local lacto-fermented sauerkraut company; Pasta Al Dante by another veteran Cleveland chef, Dante Boccuzzi and Ohio City Burrito, which has a store on W. 25th St.

This special section offers free food and soft drinks, served cafeteria/buffet style, with a rotating set of specials. On this day, smoked meats and mac ‘n cheese were at the Chef’s Corner.

Also on the Club Level, the salad bar gets stocked regularly throughout the game.

Ingraham served as chef at Progressive Field a few years ago, then made the move to healthcare foodservice at the Cleveland Clinic. Last summer, when he attended an Indians game as a guest, “it was like seeing your old girlfriend who’s doing really well,” he says, referring to the moment he knew it was time for him to come back to baseball. He’s looking ahead now to the MLB All Star Game, in which even more Cleveland chefs and restaurants will be featured. 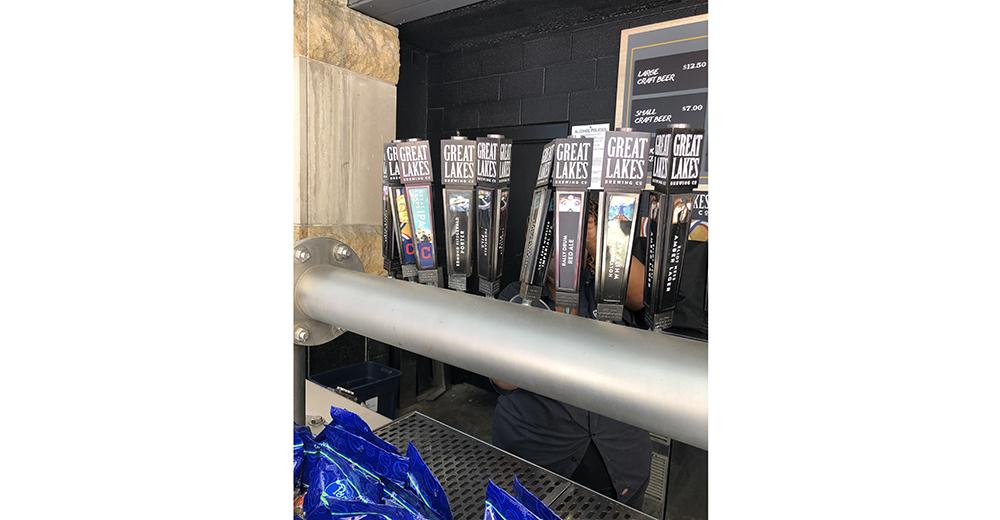