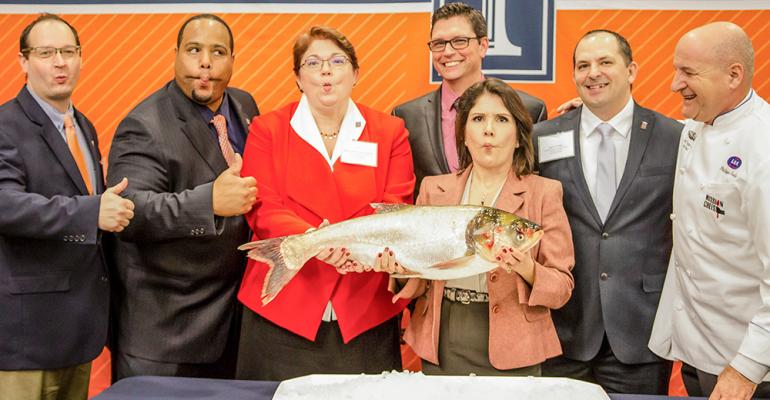 Taking a bite out of invasive fish

Students at the University of Illinois do their part in reducing Asian carp, eating more than 12 tons every year. Here’s how the dining department makes it happen.

Invasive silver carp, or Asian carp, as they’re better known, are a menace: football-sized and bigger, choking the Mississippi River and waterways near and far, jumping into fishing boats and causing injury and even death.

The carp were introduced in the early 1970s to help wastewater treatment plants keep retention ponds clean, and like many other man-made “solutions” to environmental problems, the plan backfired spectacularly. To put it in perspective: Asian carp are now found in, or have access to, all the rivers and streams between the Appalachians and the Rockies and in many cases have become the dominant species in those waterways, according to Dan Stephenson, chief of fisheries for the Illinois Deptartment of Natural Resources. Asian carp has a mild taste, like cod or tilapia, and is a good source of vitamin B12, selenium, protein, phosphorous and omega-3 and omega-6 fatty acids.

Experts estimate there are 10,000 carp per river mile. So now what?

One way to get rid of the carp is to eat them. It just so happens they’re delicious. One drawback is the fact that they have a lot of bones. But the dining team at the University of Illinois at Urbana-Champaign, led by Associate Director of University Housing and Dining Services Dawn Aubrey, has met the challenges and served more than 12 tons of carp in the dining halls for three years.

Recently, government, environmental and university leaders gathered at the university for the Catch to Course luncheon, which highlighted not only the big problem these fish pose to our environment but also a viable solution. The culinary team at the University of Illinois gets around Asian carp’s bony problem by simply frying it whole, picking it apart into succulent pieces family style and warning guests about the bones.

The luncheon, which featured Asian carp, brought together an alliance among the Illinois Department of Natural Resources, the Louisiana Department of Wildlife and Fisheries and the University of Illinois.

Lt. Governor of Illinois Evelyn Sanguinetti spoke at the luncheon, praising the alliance’s work to “educate the public about the consumption of Asian carp and to help fishermen sell it and become financially viable, and at the same time increase its demand.”

Increasing demand—while no doubt good for the environment and the local fishing industry—can be the catch (pun intended) in marketing, serving and getting American consumers to try Asian carp. In a seafood-cautious society, the word carp can conjure up some unpleasant images.

“It’s not a bottom feeder, it’s actually a middle feeder,” Aubrey says of misconceptions about carp. Rebranding the carp as “silverfin” could be another way to introduce the species, she adds.

But the best way to conquer misgivings about carp is to serve it in a beautiful, delicious way, something the university has been perfecting. Frying the carp whole—bones intact—and serving it family style with a disclaimer to watch out for the bones has been working great.

“It’s not unusual to fry a 20-pound carp, and that’s very impressive on a platter and it’s not hard to do,” Aubrey says.

“It’s been very well received,” Aubrey says. “It’s not only delicious, but students know they’re doing their part for an environmental problem, so that makes it a very easy sell.”

The dining department has worked with local fishermen, and with the high volume of fish being ordered (regularly 4,000 pounds at a time), have been able to have a positive impact on the local economy, Aubrey says.

“What’s really cool about it, we have a fisherman here in Illinois and this is his family business,” she says. “And what’s crazy is, yes, this is a local product.”

A few dining employees went out on a boat with fishermen on the Illinois river and caught 3,000 pounds of carp in a little over an hour, Aubrey says.