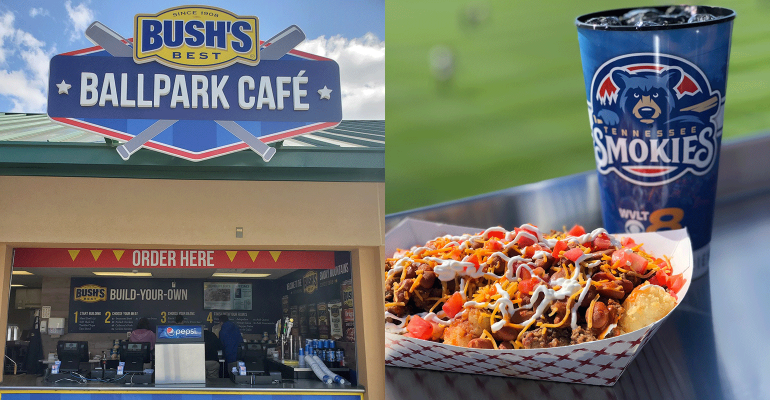 Moonshine carts, Rocky Tots inspired by a Dolly Parton song, a barbecue mac ‘n cheese cone and “more beans that we know what do with” make for some fresh and fun menu items at Tennessee Smokies Stadium in Knoxville.

Oddly enough, Food and Beverage Director Chris Franklin turns to a football metaphor to describe his approach to baseball food. But there’s a method to his madness as he starts his fourth season with the Double-A minor league affiliate of the Chicago Cubs.

“I want to block the tackle first and pull out the trick plays later,” Franklin says of his menu-planning process at Smokies Stadium. “I want to do the simple things really well and then come up with the fun items to give fans an awesome experience.”

The changing face of baseball food, evident in the major creativity found in minor league parks, is the motivation Franklin needs to come up with those “experience” oriented menu items, like a cone stuffed with pulled pork plus mac ‘n cheese drizzled with barbecue sauce, or a burger spiced up with Italian sausage and sweetened up with Krispy Kreme donuts as buns. “It used to be just hot dogs and nachos, but now the bar has been raised and people expect more unique choices.”

The 100 or so employees at the ballpark are mostly high school students or teachers or retirees “looking for something to do,” Franklin says, not necessarily trained culinarians. So a flexible menu must also be simple to execute. “I spend time working with them [on any new menu items] and make sure they’re comfortable so they can provide that experience for fans coming to the ballpark.”

New this year is a partnership with Bush’s Best, a bean-centric concept called Bush’s Best Ballpark Café. “We look to our sponsors when creating menu items,” Franklin says, “and we’ve got more beans than we know what to do with!”

But there are plenty of great uses for the versatile, fiber-rich protein component of beans as an ingredient. Blended burgers—not just for mushrooms anymore—are made with canned beans blended with ground beef for a patty with flavor (and bean nutrients too). Build-your-own nachos and tacos are part of the concept, but the “latest and greatest” menu item according to Franklin, is the Tennessee rocky tots.

A Dolly Parton song was the inspiration for the Tennessee rocky tots, a shareable snack of tater tots, Mexican spiced beef, cheese and, of course, beans.

Sweet treats at the stadium also take a page of the Southern playbook: a highlight has been deep-fried Moon Pies, which “people liked way more than we expected,” Franklin says, adding that he’s had some requests for fried bologna sandwiches, so he’s looking into that for later this season.