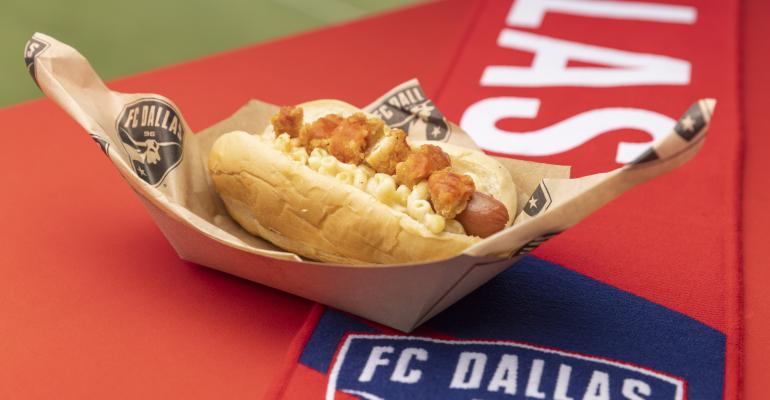 FC Dallas introduced Toyota Stadium’s new Executive Chef Erika Dabney at a special showcase of new mid-summer culinary additions in the midst of the team’s 27th MLS season on July 27th in the Gallagher Club at the National Soccer Hall of Fame. The new menu items will be available starting July 30 when FC Dallas hosts LA Galaxy at Toyota Stadium in a match presented by United Healthcare.

The Legends Hospitality culinary team at Toyota Stadium is now directed by Dabney and General Manager Kristy Rempel after Dabney was appointed executive chef of the venue following former Executive Chef Rex Turner’s appointment as district chef for management company Legends Hospitality, where his responsibilities include guiding the culinary operation at Toyota Stadium and The Star in Frisco, the world headquarters for the NFL’s Dallas Cowboys.

Dabney previously led dining programs for such major US sports and entertainment experiences as the Circle Line sightseeing cruise around Manhattan and most recently directed culinary for Legends as executive chef at Ochsner Training Facility, the practice complex shared by the NFL’s New Orleans Saints and the NBA’s New Orleans Pelicans. She started her career with Legends at Prudential Center, home of the NHL’s New Jersey Devils.

As FC Dallas’ 2022 MLS season continues in record-setting summer temps, Dabney and Rempel are premiering a number of offerings for fans with the refreshing and spicy layers that satisfy their cravings for big and bold flavors, with the creations based on the culinary and hospitality team’s feedback from FC Dallas fans.

“The FC Dallas matchday experience is a North Texas summer entertainment tradition known for its great food, and we are thrilled to share exciting additions to the flavors that our soccer fans already crave and love,” Dabney says. “Having great ingredients like Casa M Spice seasonings makes our menus win for fans.”

“Across the Stadium we have superb and flavor-filled offerings for fans,” Rempel adds. “We are continually studying what fans enjoy to take our FC Dallas match day to new levels of fun. Chef Dabney has led the creation of excellent and innovative additions that meet our goals to bring even more enjoyment to FC Dallas match day as the soccer energy continues to grow to new heights in North Texas.”

Here are some of the new additions...