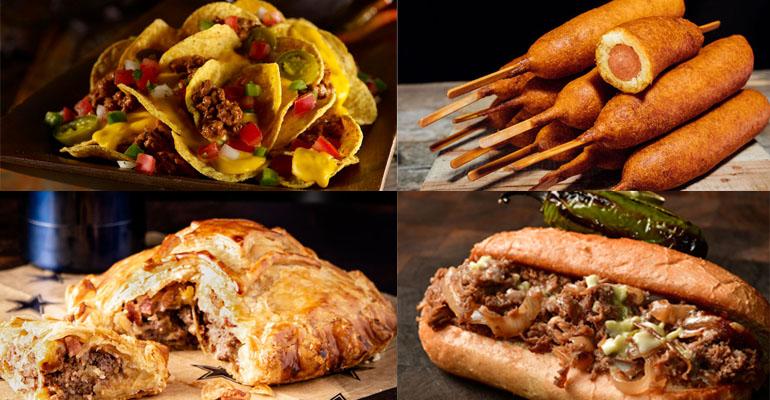 Start Slideshow ›
From nachos to cheesesteaks, the concessions and recreations team at the Texas mega stadium called Jerry World is delighting sporting fans at games.

AT&T Stadium in Dallas, home stadium of the NFL’s Dallas Cowboys, is also one of the premier event venues in the country, hosting major concerts, sporting events and even some 600 private catered functions annually. Its food & beverage operations are managed by Legends Hospitality, an FM Top 50 contract management company that was founded in 2008 specifically to handle concessions and catering operations at both AT&T Stadium (then called Cowboys Stadium) and the new Yankee Stadium ballpark, home ballpark of Major League Baseball’s New York Yankees, in the Bronx, New York.

Legends’ F&B operations at AT&T Stadium are featured as FM’s Innovator of the Month in its March/April 2020 issue. The stadium’s F&B unit serves fans out of nearly 300 points of sale plus offers catering to 360 suites. Most of what is served is developed in-house, with only a handful of outside restaurant concepts having presence inside the facility, and only one of those—a Papa John’s—is a national brand.

Recently, emphasis has been put on developing items that meet fans’ dietary as well as taste preferences, with more vegetarian/vegan and gluten-free choices. As always, the stress is on serving what fans want with no “gimmicky foods” in the words of Food & Beverage Director George Wasai.

Here’s a roundup of some of the more popular “Cowboy Food” items at AT&T Stadium.