What Sodexo Live! will be serving at the 2021 Grey Cup 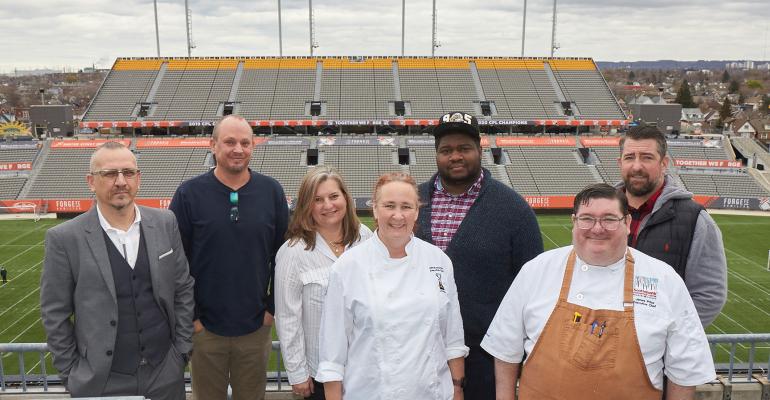 Start Slideshow ›
Sodexo Live! unveils its lineup of menu items and local suppliers for the Grey Cup, the Canadian Football League’s championship game, to be held at Tim Hortons Field in Hamilton.

Sodexo Live! has announced its lineup of food offerings for fans to enjoy at the 108th Grey Cup, the championship game of the Canadian Football League akin to the NFL’s Super Bowl. The game, between the hometown Hamilton Tiger-Cats and the Winnipeg Blue Bombers, is scheduled for Sunday, Dec. 12 at the Tiger-Cats’ Tim Hortons Field home stadium in front of some 25,000 fans.

As hospitality partner to Tim Hortons Field, Sodexo Live! has been reimagining the fan experience to deliver a wide variety of options that emphasize local vendors from around the region. Led by Executive Chef and Hamilton native Tina Rousseau, the culinary team at the venue is focusing on using locally sourced and sustainable ingredients, with roughly 70% coming from suppliers within 100km of the venue, and a set of creative menu creations restaurateurs and suppliers that capture the local flavor, including items on the menu from locals like Bench Brewery, Venetian Meats, Beach Road Kielbasa, Poke Co, Bon Temps Oysters, Joshy’s Good Eats, Bitten Cupcakes and D’oh Cookie Dough.