ADVERTISEMENT
What is schnitzel?

Schnitzel is, quite simply, meat that’s pounded thin, breaded and fried. Not just for Oktoberfest and old-school Eastern European diners whose names begin with “Der,” schnitzel is crisped up and ready for center-of-the-plate stardom. This pork schnitzel, created by Aladdin Executive Chef Matt Lykens at Alvernia University in Reading, Pa., is served with warm German potato salad, braised red cabbage and egg noodles.

Power up with mushrooms

It’s not just burgers getting in on the blendability trend. This schnitzel at Penn State features a mushroom-forward gravy for rich umami flavor and an extra veggie boost.

A traditional garnish, that squeeze of lemon, as seen here at Tulane University’s Oktoberfest, perfectly counters schnitzel’s rich, fatty flavor. Spaetzle, a traditional accompaniment, is a delightful little dumpling that can soak up all the flavor on the plate.

At Alvernia’s Oktoberfest, this herb-infused spaetzle was part of an action station, pan sautéed with caramelized onions and braised pork belly.

Also at Alvernia, brats were infused with beer then seared with gorgeous grill marks.

An interesting take on what Americans know as a cold salad for summer picnics, German potato salad is much heartier and served warm, shown here at Penn State’s event.

Cool as a cucumber

Another side dish from Penn State that goes hand in hand with schnitzel is cucumber salad, creamy and flavored with fresh dill, the herb to have at the ready when cooking German cuisine.

And on the sweeter side of Oktoberfest, Alvernia’s Bavarian cream with fresh berries was served in individual cups. 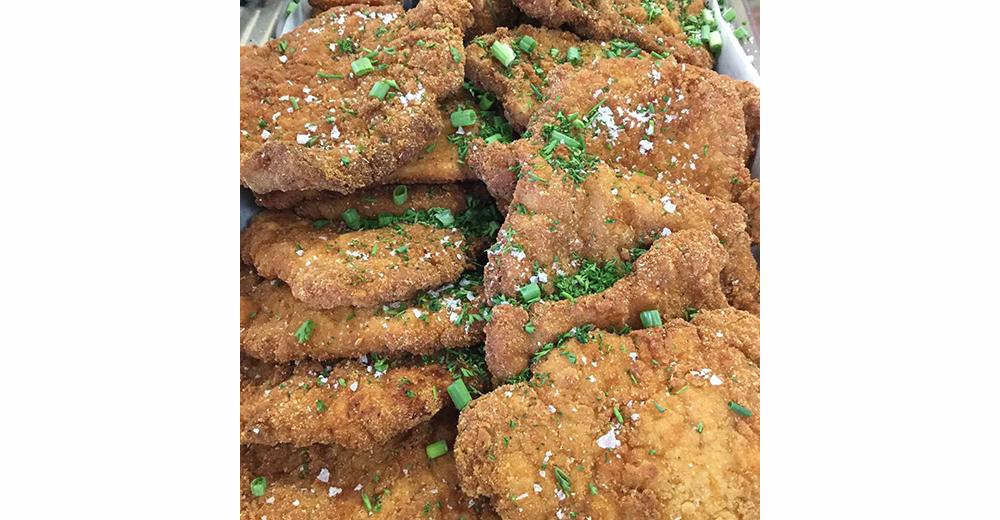