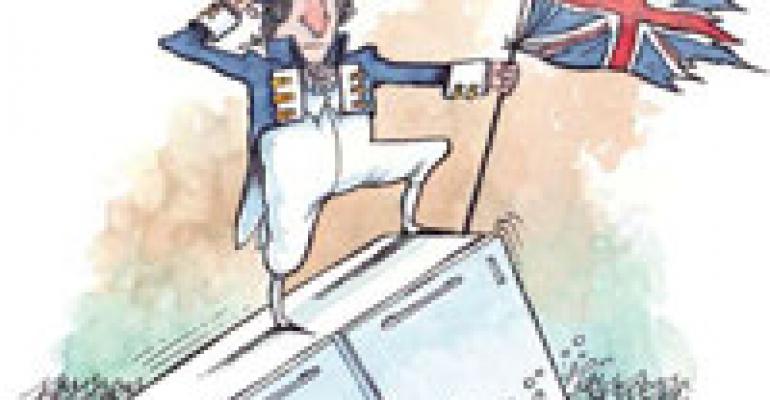 It's been a while since the British Royal Navy was the backbone of a worldwide empire. But just how far it has fallen was revealed recently when one of its blue chip ships — the aircraft carrier HMS Illustrous — had to abort a mission and return to port because of…a broken fridge.

The carrier had just undergone a $216 million upgrade and was two days out on a mission to the Indian Ocean, where it was scheduled to join a multinational task force. It was bristling with high-tech weaponry and carried nearly a thousand crew members when someone discovered that the onboard refrigerator was malfunctioning.

Apparently, the problem was not fixable at sea, and the captain did not want to proceed into the tropics with no way to keep perishable food on board, so Illustrious turned back to port. The repairs only took about a day and the ship headed back out.

What a comedown from the Royal Navy's Captain Bligh days, when crewmen could be keelhauled for so much as complaining about the steady diet of hardtack and salt pork!

A crew of Dairy Queen workers in St. John, Newfoundland, Canada, faces disciplinary action after one of them posted video footage on the popular internet site Facebook.com showing a staffer dropping his pants and “mooning”, first out of the drive-thru window and then at the camera (worse, he then went back to work without washing his hands). Other footage shows workers having a snowball fight behind the counter.

As if that weren't bad enough for the restaurant's reputation, the Facebook post and the resulting publicity has generated additional comments from former workers and customers about the staff's ongoing lack of interest in either good food safety practices or customer service.

Local health inspectors were unamused but reliably sententious, with one official helpfully explaining to reporters that dropping one's trousers behind a restaurant counter constitutes a health code violation.

State legislators in Mississippi recently introduced a bill that would make it illegal for state-licensed restaurants to serve obese customers. Mississippi ranked number one in the most recent Trust for America's Health state obesity rankings, with an estimated 31 percent of its citizens considered obese.

Chances are, upscale hoity-toity places serving microscopic dollops of nouvelle cuisine will probably not be affected by this proposed law. Nor will vegetarian restaurants. This is not where the obese congregate.

No, this bill would clearly slam buffets, burger joints and pizza parlors the hardest. Some of these may be outlets of chains that could decide Mississippi is no place in which to do business. But the impact might be most felt by mom-and-pop greasy spoons who will see their best customers barred from their doors.

The bill's prospects — or how it would be enforced were it to become law — were up in the air at FM press time. But if it is the intent of state lawmakers to turn Mississippi into a land of micro-portions and rabbit food emporiums, this could be a good start…

Quote of the Month

“Perhaps you could bring your own rat and we'll cook it for you.”
— a waitress in Hanoi's “elegant” Dan Toc Quan restaurant, offering an alternative to the kitchen's out-of-stock situation on what might be termed Vietnam's traditional “other white meat” (from the Wall Street Journal, Feb. 6, 2008, in a story about how rodent eating is taking off in response to bird flu concerns.)