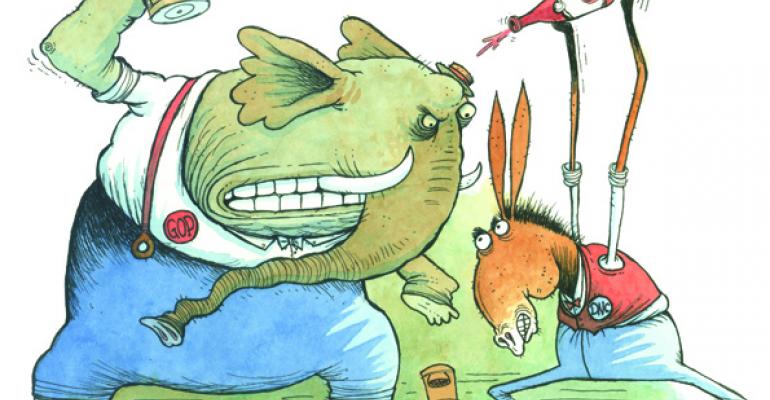 Our long national quadrennial nightmare is almost over, my friends. As this issue of Food Management hits the desks of loyal readers, there will be less than a month left to the 2012 election.
Before we bid a not-so-fond farewell to the 2012 campaign, let us pause to consider the culinary angle as only Just Desserts can. After all, at the top of the two major parties’ respective tickets are two individuals with some culinary notoriety.

One is a middle-aged man who enjoys junk food but is married to the country’s foremost nutrition nag. It’s as if Dean Martin somehow found himself hitched to Carrie Nation.

You know those beer summits Obama likes to hold? It’s not for the beer, it’s for the bar food. If he were “the most interesting man in the world” he’d be telling you that he doesn’t always eat pizza, but when he does, it’s because the Missus took the kids on vacation to Majorca, so the coast is clear...

On the other ticket is a man so colorless he probably doesn’t eat anything more chromatic than a mayonnaise sandwich on white bread (washed down with plain milk). And since Mitt Romney’s Mormon, we know for a fact that he doesn’t booze or smoke (or maybe even drink coffee). Pretty ironic that he wants to lead a Starbucks-addled nation, no?

Let’s take a culinarily skewed look back at this campaign, shall we? Of course, we’ll have to focus mostly on GOP contenders since the Democrats didn’t hold a competitive primary season this year.

How can we not start our electoral food tour with the former CEO of Godfather’s Pizza who for a brief period found himself the GOP front-runner? Among his career accomplishments, Cain touted his term as president of the NRA. This got GOP voters pretty excited until they realized it was another NRA he was talking about.

Hog Slaughterer to the Nation and the interminable campaign’s trail’s first stop (for a “caucus” system no one outside of Otumwah can understand) is Iowa. It's land of rolling fields, picturesque barns and PETA nightmares. It is also a state where campaigning pols are expected to express devotion to deep-fried foods, small town values and perpetual corn subsidies.

This year’s Republican field—a dozen or so at one point—dutifully trooped through the state, giving news photographers ample opportunities to snap pictures of politicians struggling to maintain their dignity while gnawing on a slab of ribs, slurping on an ice cream cone or biting into a corn dog. We believe one actually got a shot of Romney with a hair out of place. Pulitzer Committee, here we come…

Anyway, since these were Republicans, there was no worry about the meat-centric local cuisine. Democrats in Iowa, on the other hand, are always hard-pressed to find that one oddball joint in town that stocks tofu…

I’m One of You Hayseeds…

One of the challenges of running for national office is convincing folks outside your region that you are “one of them.”  This can bedevil even the most outgoing of pols in regions outside their natural habitats.

It means that patrician type Northeasterners like Romney or 2004 Democratic nominee John Kerry have to pretend to like fried catfish and know what the hell grits are. Chicken-fried-steak-loving Southerners like Newt Gingrich or Mike Huckabee have to work up a hankering for pierogis in Cleveland and clam chowder in Boston.

Even the famously cool Obama has tripped up in this area. He reportedly once asked for Dijon mustard for his burger and emphasized a point about rising food prices by asking a rural Iowa crowd, “Anybody gone into Whole Foods lately and see what they charge for arugula?”

2008 GOP veep nominee Sarah Palin would certainly never make that mistake. One the other hand, when Palin sat down for a pizza with The Donald (Trump) in New York City, she committed the cardinal Big Apple error of eating it with a knife and fork (just like they do in Alaska?). Luckily, she didn’t try to shoot and field dress it first.

Even more astonishing was that native New Yorker Trump did the same thing (here’s the evidence, folks). Maybe he was just being gracious to an out-of-town guest, but frankly,  if you don’t even know how to eat pizza in your own home town, you deserve to be fired…