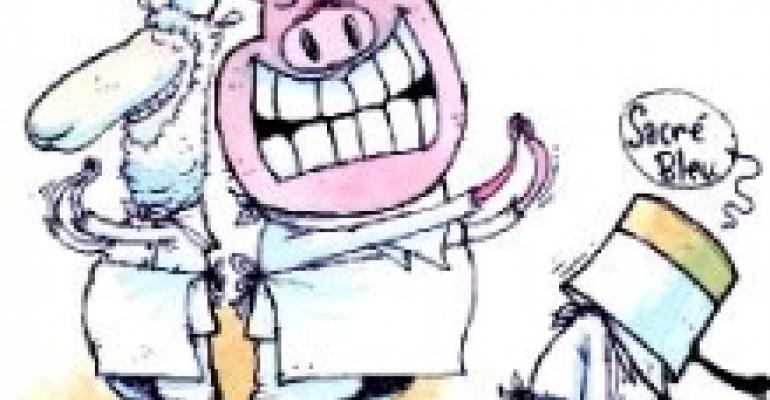 Leave it to the French to use food as a weapon. According to a recent report in the New York Times, a nativist right-wing group in Paris has been running a soup kitchen for the homeless and downtrodden of the French capital. Nice gesture...except that the soup the group serves deliberately contains pork, in order to discourage Muslims from partaking (Islam prohibits the eating of pork).

The program is run by a group called Identity Bloc, which opposes what it sees as the dilution of the country's cultural traditions by a swelling non-European immigrant population. Its signature soup has become a poke in the eye to the state's official multiculturalism, though it started innocently: pork was originally used in the soup only because it was cheap.

Nevertheless, the situation has apparently led to some surreal moments, such as when plainclothes officers chased Identity Bloc servers and their soup through the capital's streets, or when the group sought to quickly set up their tureens and ladle out the soup while the cops' backs were momentarily turned.

What struck Just Desserts in the Times report was not just the politics of the soup giveaway, but a seemingly minor detail near the end of the story: apparently, French soup kitchens traditionally serve complete dinners—cheese, dessert, even wine—rather than just some simple broth and bread. Even Identity Bloc's soup, while politically incorrect, is a hearty concoction filled not just with pork but vegetables and sausage.

And there's the irony. Behind its mean-spirited grandstanding, Identity Bloc is inadvertently demonstrating something about French culture that it might justly be proud of—a tradition of hospitality so comprehensive that even beggars can eat like kings.