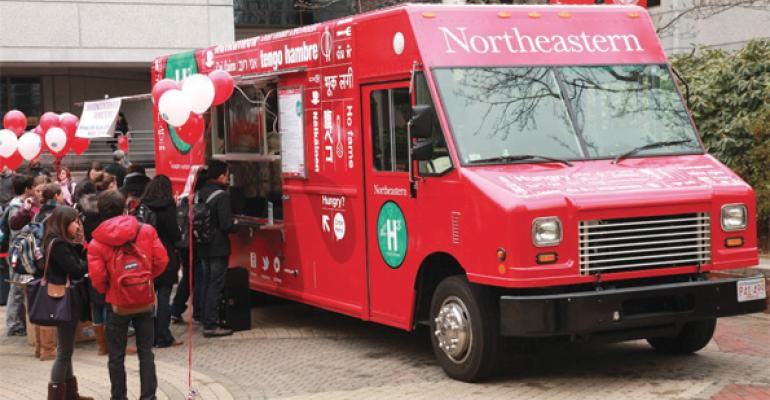 Menus On The Move

It didn&rsquo;t take long for food trucks to reserve a parking space in the hearts of foodies. Though selections must be grab-and-go and casual, the best menu items are a marked departure from those found in a c-store or caf&eacute;. 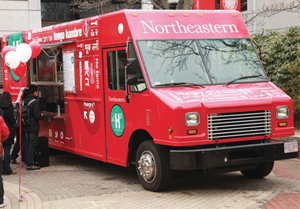 The key question for a food truck—even before checking the tires and finding a good spot—is this: Is the menu road-worthy? Each item must be some combination of bold, original, exotic, comforting, fun, delicious and portable, preferably with a memorable name. And the offerings must appeal to the traffic you expect to intercept. To avoid getting left in the dust, each selection must be a virtual powerhouse. Weak menu items will only weigh things down.

“This is a different type of food operation, so we want menu items that reflect that—it has to be unique and it has to be cutting edge,” says Eric Yung, executive manager for retail concepts at Miami University, Oxford, OH, where the strEATS food truck has had fans following it through campus since last fall (about 1,000 transactions a day).

Planning the menu, a yearlong process, centered around “fun food and different presentations,” but the one thing Yung says was paramount, “we knew it had better taste really good.” Before the menu was finalized, a mobile cart placed in a busy crossroads served as the testing ground. Honest feedback helped to winnow down the offerings from many vague flavor profile ideas to a couple dozen strong signature items. Today, consistency is achieved via Miami’s central production facility, where a lot of prep work is done each morning (for Cuban sandwiches, the meat is pre-measured, for example).

When plotting a food truck menu’s course, it helps to think like a foodie. Foodies are following mobile eateries (both on the streets and on their Twitter feeds) not just for fast convenience. They are seeking authentic global eats, often with a fusion twist. Out-of-this-world burgers and fries. Comfort in the form of a grilled cheese, maybe topped with kimchi. And certain foodies, in certain hours of the night, are looking for fried cheese sticks, chicken fingers, cheese sauce, French fries and marinara—all in one sandwich (it’s called “The Phat Jay” on Elizabethtown College’s Bird Feeder truck. More on that later).

Even if you are not planning on a food truck in the near future, that doesn’t mean you can’t have a limited-time finals week or orientation week promotion featuring “food truck-style cuisine.” One B&I operation even created a faux food truck façade on a permanent concept within the building.

Here, find seven hot categories of winning menu items, the star items on food trucks across the country and recipes that you can try on your own truck.

The blending of cultures makes for wonderful food truck traffic. After all, Kogi BBQ in LA, Roy Choi’s groundbreaking food truck, started it all with Korean short ribs tucked into a traditionally Mexican taco. Here are some food truck menu items that roam where they want to. 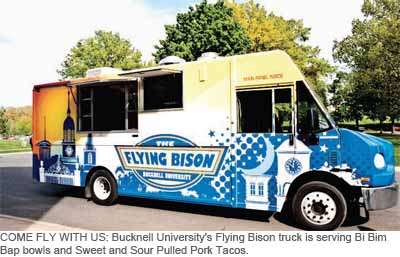 The University of Washington’s Motosurf truck menu mixes and matches Korean, Hawaiian and Pacific Island street food items with just the right amount of the unexpected:

Kalua Pig: a plated lunch item—shredded pork and cabbage served with two scoops of sticky rice and one scoop of macaroni salad. The ‘pig’ also gets paired with miso mayo and Asian slaw on a slider.

SPAM Sliders: for adventurous diners...made with a slice of SPAM glazed with shoyu (a soy sauce popular in Hawaii and Brazil) and brown sugar; miso mayo and Asian slaw on a toasted roll. The SPAM gets mixed up with Japan in the SPAM Musubi, paired with sticky rice and wrapped in nori (seaweed).

Singapore Noodles: traditionally stir fried without sauce, are modified just a bit with the addition of coconut milk to create a saucier bowl on Rosie, the food truck at Rhode Island School of Design.

The Pork Sandwich: pulled pork that’s been marinated in Mexican spices, topped with a cheese mixture of Cheddar and Feta (the signature cheese mix for all the sandwiches on RISD’s Rosie truck), all served on a Portuguese muffin (just a little denser and sweeter than an English muffin), says Pierre St. Germain, executive chef/associate director of dining and catering services at RISD.

“They’re exotic but recognizable, and most importantly, they taste really, really good,” says Miami U’s Yung of the two most popular sandwiches (Banh Mi and Cuban) on the strEATS truck. 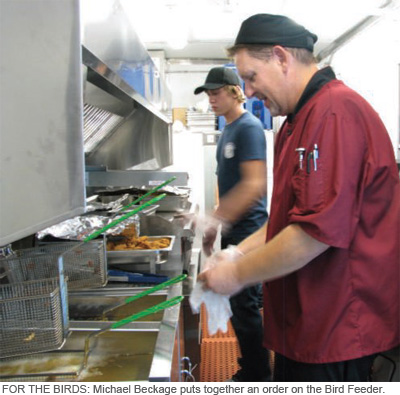 The food truck that rolls up to 200 different public schools in Orange County, FL, started out as an emergency feeding measure after a hurricane in 2004, says Kern Halls, area manager. “After a few years, we saw the popularity of the food truck craze just take off, so we thought we could do something more,” he says. Now, kids can sample food truck fare for the same price as regular cafeteria items (and everything on the truck is free- and reduced-eligible, too).

The menu was created with some inspiration from the Chefs Move to Schools program, Halls says. The most popular items:

The Hawaiian Burger: a beef patty with pineapple and ketchup mixed with Sriracha—(see the recipe at food-management.com) and the Buffalo Chicken Wrap. Pre-packaged fresh fruit (cantaloupe and pineapple spears) is also a cool choice for days spent playing in the hot Florida sun.

A lot of prep work—for cold salads, especially—can be conveniently done in the morning in the schools' kitchens, Halls says. “We prepare some items in the school, and some in the truck. We have a lot of storage and refrigeration aboard the truck and that makes it really easy.”

The cultural road tripping that goes on with many food trucks can draw its inspiration anywhere from the streets of Italy to a Midwestern county fair. From Thailand to Route 66 and back again. Here are some great scenic detours:

Something of the 50s drive-thru ethos lives on in food truck selections that include a good old burger and fries. Of course, once on a food truck, they’re completely different than the Happy Days version.

Mac and Cheeseburger Sub: a funky mash up of American favorites is one of the top sellers on Elizabethtown College’s Bird Feeder truck, Riddles says.

The Happy Hippie: a veggie burger with sliced cucumber. (TNT and Hippie burgers are both on Elizabethtown’s Bird Feeder truck).

What's a burger without fries? 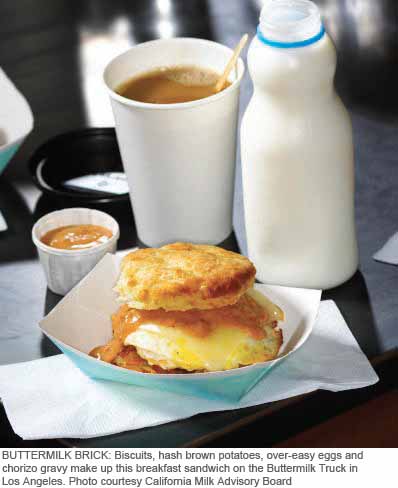 “Our most popular item on the Hungry Hungry Husky is the Gourmet Fries,” says Deb Fantasia of Northeastern University. The fries take on quite a variety of identities, including:

Fries are acting as a canvas for flavor at RISD, as well. “Rosie’s ‘Nachos’ are actually shoe-string fries topped with our zesty chipotle cheese sauce and a black bean salsa with corn and sundried tomatoes,” says St. Germain.

The Red Square BBQ truck at the University of Washington (part of UW Street Food, a collection of five food trucks that move around campus during the semester), offers a good selection of all things barbecue: pulled pork sandwiches, ribs, beef brisket, hot link sausage and sliders, all with a choice of House BBQ Sauce, Spicy BBQ Sauce or Carolina Mustard Sauce. Customers can choose to “spike it!” by adding a hot link or kielbasa to any BBQ sandwich.

But wait, what’s this?

Vegan Field Roast Sausage? And there’s even a Gluten Free BBQ Plate, with a choice of meat and sauce layered with beans and slaw.

As adventurous as mobile menus can be, comfort foods like mac ‘n cheese, mashed potatoes and grilled cheese sandwiches all appear to be worthy road warriors.

“It’s something every college student loves, especially late in the night,” Riddles says with a knowing chuckle, describing the Bird Feeder’s signature sandwich:

Breakfast-for-dinner (or at midnight), is a great trend for food trucks.

The Smothered Egg Wrap: on the Hungry Hungry Husky’s “Late Night Menu.” Scrambled eggs with cheddar cheese, bacon, peppers and onions, wrapped up in a flour tortilla, the perfect night-cap.

Take a look at more recipes from food trucks: