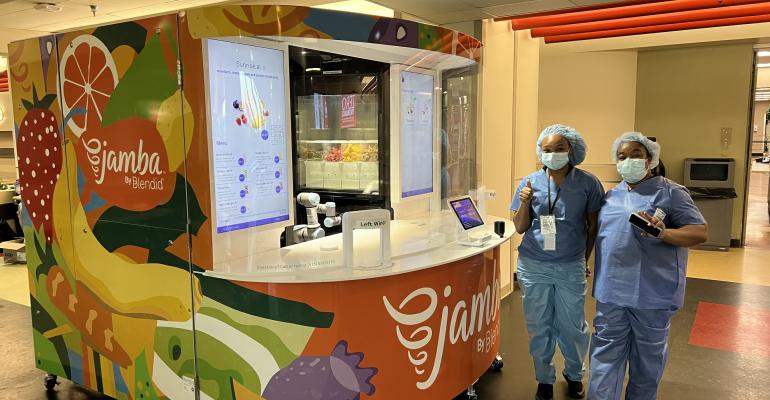 5 tech things: Jamba by Blendid expands into the healthcare market

This and a study showing growing consumer acceptance of robot created food are some of the tech-related developments you may have missed recently.

Smoothie concept Jamba and robotic food service solutions firm Blendid are expanding their Jamba by Blendid autonomous robotic kiosk program to the healthcare industry with the pilot kiosk opening at Grady Memorial Hospital cafeteria in Atlanta this month. Operated by Sodexo, the 8X8-ft. kiosk is accessible to patients, staff and visitors 24/7 at the country’s 10th largest public hospital and leverages Blendid’s contactless foodOS food automation platform to provide freshly made smoothie options via a fully contactless, robotic mix master. The opening marks the second time Jamba and Blendid have teamed up with Sodexo for a Jamba by Blendid location, following one that opened earlier this year at Georgia College & State University. Jamba by Blendid currently has a total of eight operating kiosk locations across the country with presence in venues like shopping centers, college and university campuses, travel centers and now hospitals.

Food crafted by robots sounds like something straight out of a science fiction novel, but companies worldwide are already incorporating artificial intelligence into production lines to make products taste better and optimize sustainability. And consumers are all in! Approximately 77% of consumers are willing to try food created with the help of artificial intelligence according to the 2023 Food Bytes report conducted by Dataessential.

Read more: Would You Try Food Made By Robots? A Shocking Number Said Yes

Amazon has officially begun making shipment deliveries with drones to customers in Lockeford, Calif. and College Station, Texas. “Our aim is to safely introduce our drones to the skies. We are starting in these communities and will gradually expand deliveries to more customers over time,” Natalie Banke, Amazon Air spokesperson said. Amazon calls its drone delivery Prime Air and has been working with the Federal Aviation Administration and local officials in both Lockeford and College Station to begin the service.

Read more: Amazon begins drone deliveries in the first two cities. One is in Northern California

Chipotle and White Castle are spending over $500,000 a month on automation to combat labor shortages and rising food costs—but it is still cheaper than paying human workers. White Castle is testing the Flippy robot at 100 locations and Chipotle uses a one-armed robot to make tortilla chips at one site—both cost $3,000 a month—and Starbucks has $18,000 AI-powered espresso machines in at least 1,200 locations, but as food costs rise and an intense labor shortage grips the US, paying monthly rentals for machines has become a cost-effective option.

Many restaurants are scrambling to figure out how best to integrate automation technology without sacrificing the human experience, but casual-dining chain Kura Sushi—with 500 locations in its home country of Japan and 42 U.S. locations with headquarters in Irvine, Calif.—has been perfecting the balance of hospitality with technology for years—utilizing conveyor belts, robots, gamification, and automation to bring sushi dining into the future.