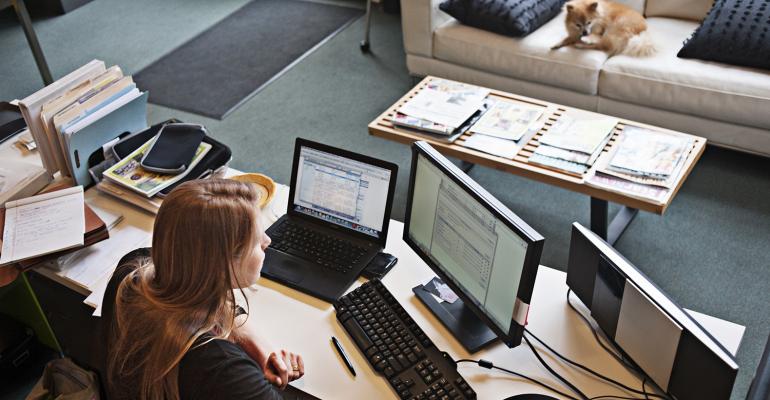 Reza Estakhrian / The Image Bank
In the near future, as the economy slows and hiring drops off, predictions are that management may regain the upper hand from labor as the Great Resignation becomes the Great Labor Slackening, reducing employee leverage over work-from-home (WFH) policies.
News & Trends>Healthcare

5 things: Will a recession weaken the work-from-home trend?

This and the University of Maine reaching its local food purchase goal three years early are some of the stories you may have missed recently.

In the near future, as the economy slows and hiring drops off, predictions are that management may regain the upper hand from labor as the Great Resignation becomes the Great Labor Slackening, reducing employee leverage over work-from-home (WFH) policies. However, some factors may play against that. First, millions of knowledge workers clearly prefer WFH so deeply that it would take something far stronger than a recession to get them to add a commute to their daily schedule. Second, recessions lead to bankruptcies, especially among firms with messy cost structures (like, say, paying through the nose for office space that you never use), so, as older, pro-office firms die, younger, work-from-wherever companies could rise to fill their space. Third, from a purely mathematical standpoint, the most rational thing for a zombie-office company to do during a recession is to slash spending on everything related to the office. “Reducing office square footage and going fully remote is cost-saving for many firms,” notes Adam Ozimek, an economist and a remote-work advocate.

Read more: How a Recession Could Weaken the Work-From-Home Revolution

University of Maine (UMaine) Dining has met its goal of purchasing 25% of its food and beverage from local sources nearly three years ahead of schedule. The movement to support local food producers at UMaine started in 2007 under the direction of Glenn Taylor, associate executive director of housing and dining, with carrots purchased from Lakeside Farms in Newport. Since then, the number of local producers partnering to provide Maine-sourced foods has grown to 72.

FM Top 50 firm Thompson Hospitality plans to open a unit of the Milk & Honey soul food chain it acquired in 2020 near the campus of Virginia State University in Petersburg, where students would be able to use their meal cards as part of Thompson’s dining services partnership with the top-ranked Historically Black College/University (HBCU). Thompson's Northern Virginia-based clients also include the University of Virginia Darden School of Business, Inova Health System and Capital One, which could all get units of Thompson's recently acquired Wiseguy Pizza chain, which menus a gluten-free cauliflower crust and vegan offerings appeal to a healthcare account like Inova, notes President/CEO Warren Thompson. Thompson is also in talks with Amazon to put some of its restaurants into that company's new HQ2 corporate headquarters complex in Arlington, Va.

In one of the largest office conversions to be launched during the pandemic, 55 Broad St. in New York City’s financial district will be turned into 571 apartments as the remote-working trend is sending office vacancies soaring. The venture of two New York developers has agreed to pay $180 million for the 30-story building that opened in 1967 and has housed numerous technology and financial-services tenants over the decades.

Cleveland Clinic Akron General hospital recently celebrated the opening of a food pantry stocking non-perishable food items and other items based on availability on its first floor to help patients who are experiencing food insecurity. Initially, the pantry will provide food for patients of the hospital’s Center for Family Medicine who indicate they have been “worried about their ability to buy food in the past 12 months or if they ran out of food and didn’t have money to buy more in the past 12 months,” according to a news release.