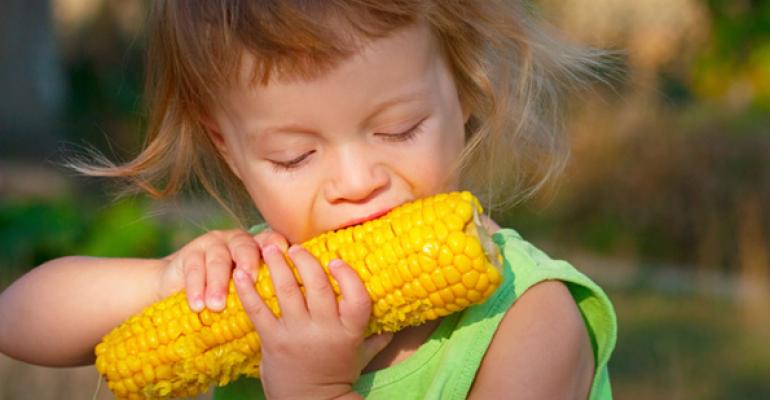 5 Ways to Get Kids to Eat Vegetables

Cool names, smoothies, stealth health and more: it&#39;s all in the name of getting a little more of the good stuff into kids&#39; diets.

Kids are notoriously tough customers. One day, they’re eating broccoli, even calling it ‘little trees.’ The next day, the only green thing they’re craving is a sour apple Jolly Rancher. If you’re feeding kids day in and day out, you’ve got to be flexible in your way of thinking about vegetables. The key is to keep giving kids chances to try—and maybe even like—leafy lettuce, crunchy carrots and cool cucumbers.

Some eschew ‘stealth health,’ preferring to get kids educated on turnips and carrots in their whole form, rather than pureed in a sweet muffin. But when it comes down to it, “I don’t mind a little ‘stealth health.’ As the parent of a 5 year old, I say, sometimes nutrition doesn’t have to be about complete honesty!” says Lisa Feldman, director of culinary services at Sodexo’s schools division. Sneaking pureed white beans into a base for dressings and dips is one of her best ideas.

It’s tried and true: Kids are more likely to eat vegetables when they have gotten their hands dirty, planted the seeds and then picked that pepper themselves.

A multi-generational program in Wheeling, WV, brings together children ages 4-6 from a local daycare with the Sisters of St. Joseph retirement community. They garden with the culinary team of Cura Hospitality, working together to pick fresh produce to make a salad lunch. Some of the tomatoes and peppers go into Sister Rosalie’s famous spaghetti sauce, which is canned for a huge community spaghetti dinner in the fall.

When different generations garden together, it has a positive impact for everyone.

Smooth Moves...
“Pairing veggies in smoothies with ‘friendly fruits’ kids already have tasted, like strawberry, blueberry or peach really makes it easier for kids to love,” says Kathy Patalsky, author of the new book 365 Vegan Smoothies. And making use of the ‘cool name’ technique, a smoothie like the Green Monster will get kids talking—and barely noticing the kale.

“One method to get children interested in veggie smoothies is to name the brightly colored smoothies such as calling a green smoothie with kale or spinach the Green Hulk Smoothie, or an orange smoothie with carrots the Orange Monster Smoothie. This makes the meal fun for children and they are more likely to accept it," says Holly Michaels of Blendtec.

Add ingredients in order listed to the blender, secure lid, and blend until smooth.

“What if we don’t even talk about the vegetable itself, but instead what you can put on the vegetable to nudge kids to eat it? I developed 12 dressings in 12 minutes. You start with a base of Greek yogurt and white beans, then add these ingredients,” says Lisa Feldman, director of culinary, Sodexo schools division, who recently presented the dips at a kid’s nutrition event held at the CIA San Antonio.