Chef Cordova, along with Morrison’s VP of Culinary Chef Cary Neff, worked with the Hackensack culinary team to put together a menu that wasted exactly nothing. Guests included about 35 hospital board members and administrators. HMH-JSUMC Chief Hospital Executive Vito Buccellato addressed the dinner guests with a story about how initiatives to reduce food waste bring him full circle to his days of growing up in a frugal family. HMH Director of Sustainability Kyle Tafuri highlighted the foodservice team’s strategies for future reduction of food waste and the strides they’ve made already made.

When Chef Cordova was planning the menu, “I took the approach of using produce that’s imperfect and using all parts of a carrot, for example. But another big piece I used was the seasonality of this region—what’s available in New Jersey.” The dip here is made with raw garbanzo beans, which are green and full of flavor. Fava bean pods and the rough tops of leeks are usually discarded, but they’re holding their own here.

Many of the vegetable parts used in the dinner lent their flavor to this classic clear soup that’s made by cooking down veggies—alliums, potato, mushroom “coins,” broccoli stems and ginger essence—along with eggshells, which act as a clarifying agent and are later strained out.

Top it off
Morrison Healthcare

The consommé garnishes included broth ingredients and local morel mushrooms, a treat that chefs wait for all year.

Using the avocado’s skin as a serving vessel, this course also featured watercress, wild fennel, lemon and in an unusual twist, roasted avocado kernel (or pit) was grated with a microplane on top. “Once you roast the pit, it becomes a deep red color,” Cordova says.

Ground cauliflower formed the dumplings, “actually more a stromboli,” Cordova says, and they’re surrounded by verdant spring leaves: spinach, pea vines, asparagus and dandelion greens, which are packed with nutrients and usually braised. Cordova served them raw, “because the more you process, the more you waste.”

“Hazelnuts—or filberts—are the great unknown nut,” Cordova says. “It’s fantastic; it’s lower cost.” Tuile translates to “tile” and is essentially a baked wafer. This one was filled with goat yogurt mousse (goats have less impact on the environment than cows) and aquafaba, the whipped leftover liquid from a can of chickpeas.

Morrison chefs served each course by taking kitchen pots out to each table, using no plastic or disposable utensils. They talked as they served, explaining the recipes, and how cooking with a zero-waste mindset affects water use, transportation costs and overflowing landfills.

Set the table and give it back
Morrison Healthcare

The platters and plates used by attendees had been purchased from a local second-hand store, and after the dinner, donated to a local women’s shelter. 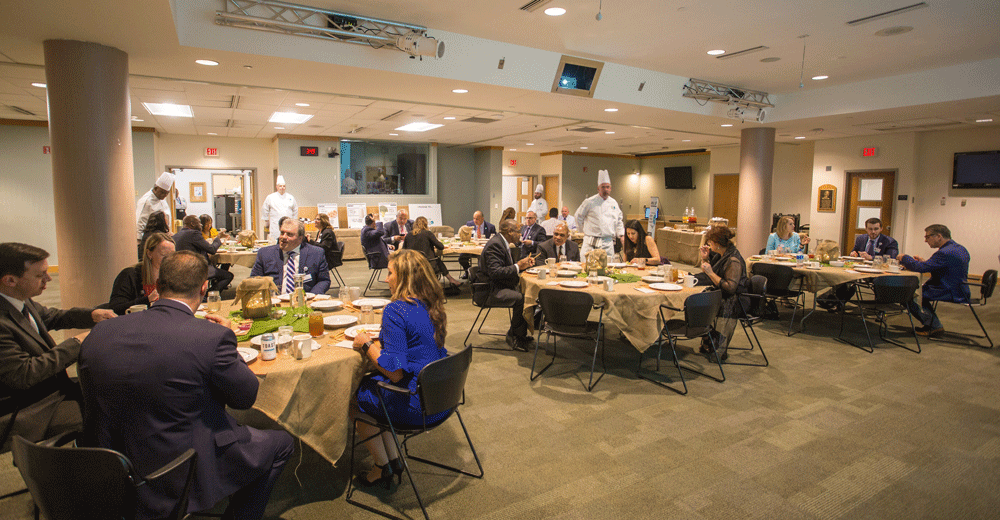