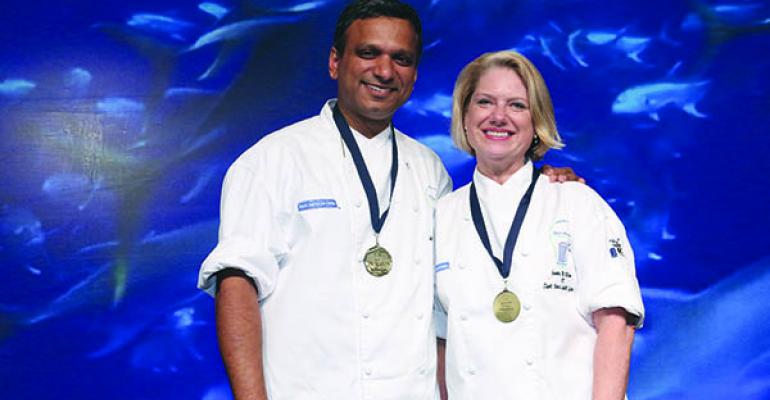 <p>Aatul Jain and Joanne McMillian make quite a team in competitions and at Saint Clare, a three-hospital and 650-bed system in Denville, NJ.</p>
News & Trends>Healthcare

The executive chef has bridged the gap with dietitians, fallen in love with his job at Saint Clare Hospital and recently been rewarded with a first-place finish at the AHF Culinary Competition.

Aatul Jain has had some pretty good jobs, but he didn’t find his true calling until a short visit to the hospital turned into an extended stay. He got his first taste of the food there when his wife spent a week in the hospital for the birth of their daughter almost five years ago and two years later, he landed his first job in healthcare foodservice.

He left a cushy gig as culinary director for a huge pharmaceutical company and part-time roles in Michelin-starred Indian restaurants and hasn’t looked back. In June, Jain and his boss, Joanne McMillian, the director at Saint Clare’s Health System in Denville, NJ, won the Association for Healthcare Foodservice Culinary Competition after two straight bronze medals.

Jain recently shared not only his secrets to winning, but also for creating healthy and tasty hospital food—or what he calls moderate indulgence.

How did winning the AHF competition feel?

Jain: It’s an ecstatic feeling and has taken some time to sink in. It was a sweet victory after getting the bronze the previous two years.

Does your boss have a cooking background?

Jain: She is not a chef at all and doesn’t, but she is a very good home cook. When we started this three years ago, she asked me how she could hone her skills. She’d walk into the kitchen and say, ‘I’ve got 10 minutes, give me something to do.’ We started with cleaning vegetables, basic knife cuts and went from there. It’s how I would teach an apprentice. She’s a very senior person and to have that mentality takes a lot.

Did you do anything differently this time?

Jain: After getting a bronze the first time, we thought that was great. The next time, we didn’t move up to silver so this time we came with a strategy. We knew our skills. She’s a dietitian, a scientist. I’m a chef, an artist. I dream and she’s technical. And we have to follow strict nutritionals with the contest, so where I’d usually say a pinch of salt, we have to measure every single ingredient. She did all the measuring and assembly and I did the culinary side of things.

You two make quite a team…

Jain: She is a great boss. She has allowed us to do all these extracurriculars, which cost the organization money or time and sometimes both. She sees the bigger picture and helps us see it, too. She’s been a mentor to me on the management end. This was my first healthcare job. I joined as executive chef and was aggressively looking to get into front of house and management. Within six months, I expressed my interest in management and she made me retail operations manager and I’ve had that dual role since. That was the first time she hired a non-healthcare person into a management role. That was a big risk for her.

How did you come to healthcare foodservice?

Jain: I had been a national executive chef for Novartis (a pharmaceutical company contracted with Sodexo) and it was a beautiful job, full of luxury, but I was looking to grow. I started looking at other options. I never knew anyone who worked in hospitals. My wife was expecting and we went to the hospital and instead of being there for three days, it was a complicated case and we spent almost a week there. When my wife was much better, we had a celebration meal there. My wife had been getting regular food, but we got this nice little dinner and I was impressed. For hospital food, it was pretty good. I never knew what went on behind the scenes. I chatted with some people and that was the seed sown. Within a month, I was feeling around for a job and a year and half later, I got this offer and couldn’t refuse.

What originally brought you to the U.S.?

Jain: Food. I love food. I grew up in India, where everyone is studying to be a doctor or engineer. I came from a very entrepreneurial family, but I wanted to cook. ‘Are you serious? You want to wash dirty dishes?’ That’s what my parents said. So I went to hospitality school—there were no culinary schools there in the 1990s—and did front of house, back of house, culinary, housekeeping, everything. I wanted to cook, and at the time, there were two places for food: America and New York, or France. I was studying hotel management at the time, and we had a French class, but I didn’t like the language. We had some family here so America was easier. I lined up a job and decided to apply to the CIA and got in. I got here the day before school started. Food was the reason for coming—not the CIA, job or family.

What do your parents think now?

Jain: Oh, I’m still the black sheep, but a couple years ago I heard my mom say ‘He’s a master in his field’ to someone. Took me 15 years to satisfy her, but it was nice to hear.

Tell me about your motto, ‘moderate indulgence,’ and how that came about at Saint Clare?

Jain: I bonded with the dietitians. They finally had a chef talking their lingo. I’d say, ‘Why can’t we do fried food or pizza? Let’s break it down.’ We can reduce the size of the pizza, change the cheese, go light on it and you don’t have to go crazy with high fat toppings. How many people are doing arugula and spinach on pizza now? You can have the bacon, but with spinach. It’s moderate indulgence—that’s my thing. I was just asked about my favorite comfort food. What comes to me is French fries with cheese sauce. You can do that with a homemade cheese sauce if you control the portion. I love my potato chips and fried food, but you have to stop at a certain point. You can indulge a little.

Why have some chefs not been able to crack that code?

Jain: Some of my initial healthcare mentors on the culinary side, who I want to say were from the previous generation, they would almost try and influence me by saying ‘Those dietitians.’ They’d talk like that and all the white coats (chefs) would sit on one side of the table and the lab coats would be on the other side—like the line was drawn. Why? You have to have a partnership, where you talk to the dietitians at their level and try to brainstorm. You want to start with a dietitian who has an open mind and you have to be willing to change. Start small with one dish, maybe just one protein or side. How can you make that vegetable tasty and not just healthy?

Don’t boil them, use two drops of good quality extra virgin olive oil in a non-stick pan with a pinch of chopped garlic, fresh vegetables and a quarter pinch of salt.

How did you first connect with the dietitians at Saint Clare?

Jain: I’d bring them into the kitchen, behind the flame with me and we brainstorm. They cook and taste with me. They see things differently, are looking in the pantry and asking why don’t we use this. They’re reading labels for me. This is the challenge with chefs. Tell a chef you have 500 calories to work with, kind of like the AHF contest. Tell them they’ve got 700 mg of sodium for the whole plate. I’ll tell a chef, you have a choice between proteins: four ounces of chicken, three ounces of red meat, four ounces of pork or five ounces of salmon. You have this vegetable, Israeli couscous and you have half a teaspoon of oil. And you can use any herbs or spices without salt. Here’s the pantry. GO!

Jain: Yes. It’s like going on the Food Network and competing on Iron Chef. I was on Chopped—and that’s Chopped right there (Jain finished second). More and more chefs love that challenge. Once the dietitian can translate the nutritional jargon into laymen culinary terms, that breaks the ice. Chefs ask me how to crack that code. Tell the dietitian to break it down on an ingredient level, not on a technical level.

How much do you interact with patients?

Jain: It’s an integral part of our job. Our duty is to interact with patients, and in healthcare jargon I learned it’s called ‘rounding.’ We go around the floors and talk to patients. It brings a lot of things out. A nurse sees the patient every day, but you walk in with a chef coat and they think, ‘Am I special?’ If there’s a problem, it comes out with great force. And it’s gratifying to fix those problems. I try to meet at least two to three patients a day. I give them some cooking tips, joke around and break the monotony of the day. It’s like I’m talking to a customer—no, it is talking to a customer.

How happy are you with the move to healthcare foodservice?

Jain: It’s changed my life. It’s added to my work-life balance. Yes, we have to be here when the weather is bad, driving in snow, but that’s the only downside I’ve ever had with this job. You don’t go to the CIA thinking you’ll be working in a hospital, but now people are seeing it. I’d love to go to a bigger health system and a bigger challenge at some point, but I love my staff, boss and dietitians. It’s been a marriage made in heaven. There’s no price to this outcome. It’s been invaluable. Just talking about it gives me goose bumps.