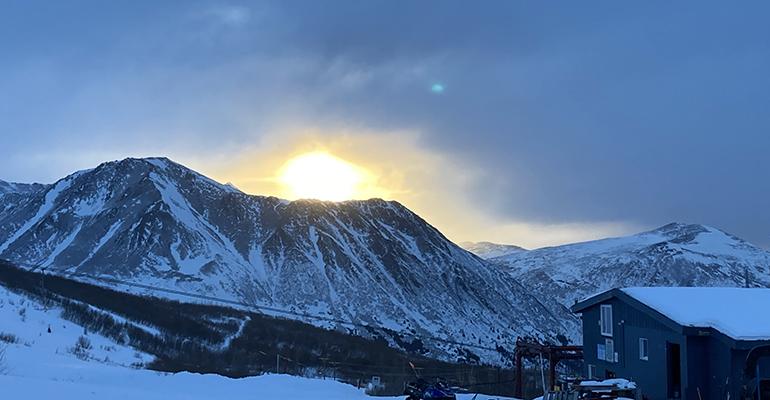 Chef Amy Foote
The landscape in Alaska provides a backdrop to long winters warmed up by seal soup.
News & Trends>Healthcare

When a moose was struck by a car and killed on a lonely Alaska road, Executive Chef Amy Foote knew exactly what not to do: let it go to waste. Foote, who grew up hunting in the Montana wilderness, can bleed, skin and butcher a moose, then cook it into a delicious, healing stew. This animal’s life was not in vain.

That’s where the conversation eventually leads after we get caught up with Foote and the Sodexo culinary team at Alaska Native Medical Center (ANMC) in Anchorage, where she’s been learning—and using—tribal wisdom from Alaska Natives for a few years now.

The last time we spoke with Foote, she was advocating traditional foods and their healing properties. We were introduced to a magical-sounding elixir: seal soup. Foote explained how these indigenous comfort foods like seal soup, reindeer pot pie, fiddlehead ferns, caribou, salmon, fireweed jelly, herring roe, sourdough starter made with birch tree water and other local favorites can help heal patients in ways that can’t always be neatly wrapped up in dietetics or science. 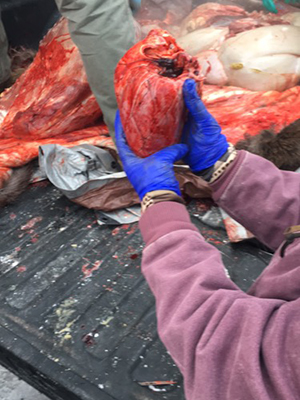 Photo: Executive Chef Amy Foote and the Sodexo team at Alaska Native Medical Center don’t shy away from butchering a moose that was the victim of a car.

And, Foote points out, a lot of the old wisdom is absolutely backed by current science. Seal soup, for example, is full of “healthy Omega 3s, it’s nutrient dense and you can feel it warm your body the whole way down,” she says, adding that fireweed leaves can be fermented, dried and used as probiotics.

In a historical example, when scurvy was threatening indigenous people of Alaska, those in a certain region where raw caribou was consumed survived, thanks to the Vitamin C content. But why eat it raw in the first place? “If you harvest it in the winter and you butcher it, it immediately freezes, so they would eat it in thin, shaved slices.”

And another example, the hospital received about 1,000 pounds of deer meat from hunting lodges hosting out-of-state hunters. Foote ground the meat and simmered the bones to make an incredibly nutrient-rich bone broth.

Now, that healing magic and warmth is more important than ever, with Alaska, remote is at is, still seeing hospitals affected by the coronavirus pandemic.

“We were doing really well for a while, but then we had some big surges in November,” Foote says of the pandemic. “During the pandemic we’ve had to really change the things we are doing. We went from having a full-service café to really just shutting things down and serving individual-size servings.” 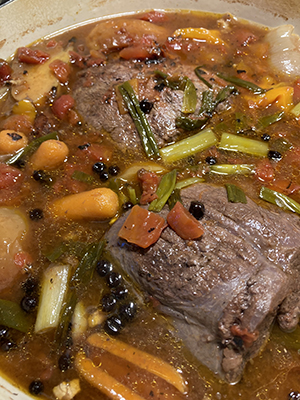 While retail has changed a lot, the hospital’s native foods program has gotten stronger and become a powerful weapon in the ongoing fight against COVID-19.

“Throughout all this time, our traditional foods program has really become more important for healing the folks here,” Foote says. “They can’t have visitors; they can’t bring in their special treats, so I feel having those foods in our program has become that much more important.”

At the time of writing, Foote was out of seal meat, needed for “seal soup Tuesdays,” a favorite among the doctors, nurses and support staff. These special ingredients are all donated by a network of hunters and gatherers. This is possible thanks to a new law passed in 2014, which allowed foraged foods to be served in hospitals. It was an Alaska physician and former Alaska senator who lobbied for this change to the Farm Bill. 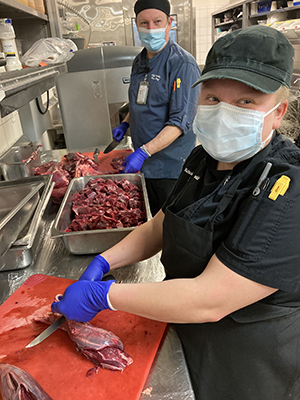 Photo: Using the moose in stew ensures it doesn’t go to waste, providing a super hearty stew to nourish the hospital community.

The catch is, none of the donated foods can be “too processed” due to health and safety concerns, bringing us back to the moose.

“With the moose salvage, there were some injuries, which meant there was more internal bleeding, so that was different [from hunting], but if you can break down a deer, it translates to anything four-legged,” she says. The moose was butchered and turned into a rich, hearty stew, more of that healing magic from the land.