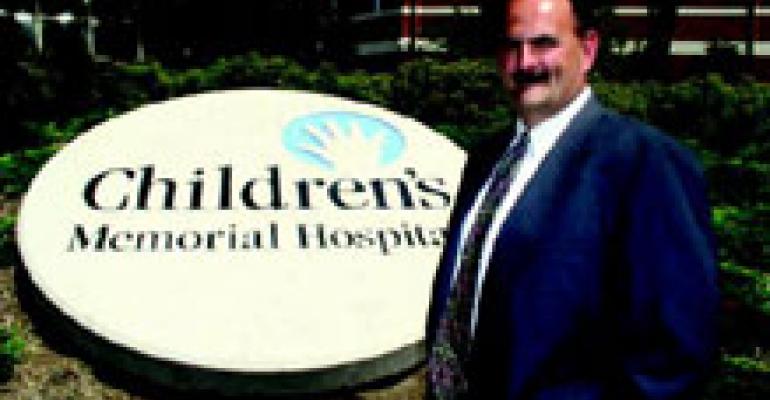 Excuse Richard Robinson if he sometimes feels like General Custer at Little Big Horn. Surrounded by adversaries on all sides and with your own resources limited, there's little you can do except keep shooting until the ammunition runs out.

Here's where the Custer/Robinson analogy diverges. Robinson, who is foodservice director at Chicago's Children's Memorial Hospital, is certainly surrounded. Six full-blown Starbucks operations ring the perimeter of the facility's campus, in the city's gentrified Lincoln Park area, while some 100 restaurants sit no more than a block away in all directions, much of it no doubt drawn by the presence of DePaul University, right across the street.

To make matters even more difficult, Robinson has been prevented from doing any major renovations to his 60s-vintage facilities because the hospital is planning to build a brand new facility in the next few years and is saving improvement funds for that effort. And of course, as a tax-exempt entity, Robinson's department has to be careful about appearing to compete with outside businesses in any case.

Despite all such constraints, Robinson has succeeded in significantly building his department's revenues and participation rates by engaging in a kind of guerilla campaign that emphasizes low-cost intercept points of sale, creative marketing and a thinkoutsidethe-box philosophy.

“I pray for cold, rainy, below-zero weather,” Robinson chuckles. “When we do have it, our sales are good, but when the weather is nice, our sales go south. So in my first two years we spent a lot of time developing programs to keep the sales sound over the good months of the year.”

One of his successes was a salads-to-go program begun about three years ago. It features almost six dozen different recipes, as well as sushi and vegetable & dip cups for the mid-day crowds (most of the annual retail revenue of around $1.5 million at Children's Memorial is generated between 11 a.m. and 2 p.m.).

“A lot of our volume was going outside and we wanted to give people an alternative,” Robinson explains. “The salads are designed so people can come in, grab one and take it to eat on the run, either inside or outside. We do about 400 a day now.”

The Cruisin Cafè
The to-go options—which the kitchen produces in-house—help with congestion as well. “The main cafeteria is licensed to hold only 180 people, so we have structured the program so many of the customers will purchase food and take it out,”

To capture even more sales from the busy, on-the-go staffers and visitors who make up the bulk of the customer base, Robinson has set up three mini-cafes in small, unused nooks and crannies across the 21-building campus. Each is individually branded— the Safari Cafè in the ambulatory building, Cmier Cafè in the Cmier research building and the Belden Cafè (on Belden Street) in the building that houses the hospital's administrative offices.

Taking up minimal space, stocking only a few fast-turning items and open only when traffic levels in the area promise brisk impulse sales, the mini-stores have doubled their sales over the past five years, Robinson says.

Another tactic Robinson employs to boost impulse sales is a “Cruisin' Cafè,” a mobile cart loaded with a variety of grab-and-go selections that makes the rounds of the hospital floors, offering food and snacks to both employees and visitors (but not patients) that it meets on its rounds.

More recently, the department began an outdoor grill program that operates in a park area on hospital property. There, it serves not only grilled items like burgers and chicken but cold salads every Thursday and Friday during the summer. Begun this past Memorial Day, the grill program now draws between 225 and 400 customers a day during its 11 a.m.-2 p.m. operating hours, Robinson reports.

It was not a simple concept to introduce, he emphasizes.

“Originally, I wanted to maximize hospital visitor traffic and thought the best way to do that would be to set up the grill operation on the sidewalk, as a sort of temporary sidewalk cafe,” he explains. “But to cook outside like that, you need a patio license from the city. Unfortunately, there is a limit on how many such licenses can be issued in a given area, and those for our area were already taken.”

Was that the end of it? Of course not. Robinson observed that no patio license is required in Chicago if an institution does the cooking on its own property (a sidewalk, even directly outside a business's doors, is technically city property). Since Memorial has a small park area in the center of its campus, he negotiated approval to set up shop there during the Thursday and Friday lunch “windows” as an alternative.

In retrospect, it turns out that decision was beneficial for another reason in addition to the license exemption. When the grill first opened, some local vendors expressed concern about what they perceived as commercial competition from a tax-exempt non-profit, a case that would have been much stronger had the hospital been operating on public “street” property.

“Having the grill inside the campus helped make the case that we were only engaging in the kind of on-premise feeding we're entitled to do,” Robinson notes. (Even then, city guidelines restricted his department from operating on a daily basis, he adds.)

The grill equipment, tables, chairs and umbrellas are kept locked in a truck when not in use to protect them from weather and theft (the park, though on hospital property, is a routine hangout for a few urban street people: Robinson says he “encourages them to leave” on days he opens the outdoor cafe by offering them free donuts and juice in the morning as an incentive, before the grill opens).

As with any external food-related operation, sanitation and temperature control are important considerations, but Robinson is already used to dealing with the hospital's very rigorous standards and operation procedures in this regard.

“Memorial's infection control department has rigorous standards and has to approve any activity in the organization that might possibly compromise a patient's health,” he notes. “They require every foodservice program to submit a full plan that must be approved before it can be implemented. So I get checked not only by the City of Chicago Health Department but also by our infection control department on a pretty constant basis.”

Robinson is a 20-year veteran chef and foodservice director whose background includes stints with management companies like ServiceMaster and Chicago's Northwestern Memorial Hospital. An unapologetic food enthusiast—his business card reads “The Architect of Taste”—Robinson has made a big difference at Children's Memorial not only operationally but culinarily.

His catering department especially reflects a fussy, no-detail-is-too-small approach. Each menu item is carefully detailed in how it should look when finished. They are the kinds of presentation charts most often seen in chain restaurants, not children's hospitals, but Robinson is convinced that appearance is as important to the success of a food operation as taste.

Certainly in catering it has been. Currently, the department generates some $425,000 annually, or almost a quarter of all department sales of $2 million.

A venerable institution
Children's Hospital has been serving the youngsters of Chicago's North Side for 125 years. Its sprawling 13-block complex encompasses 300 beds, virtually all of them reserved for kids.

Robinson arrived at Children's Memorial five years ago, at a time when patient satisfaction-was under 50 percent and client satisfaction with the management company running the foodservice operation was even lower. A lot of the catering was outsourced to another company, and “the kid's menu was not kid-friendly at all,” Robinson says.

“We didn't give the kids choices. It was a select menu, no substitutions, and the patients had no say. My philosophy is that meals are probably the only thing a kid does have a say in, and that he or she should be able to make those choices during his or her stay.”

So the menu program was entirely revamped, incorporating input from patient focus groups as well as child nutrition professionals. The result is a system with much more patient choice about food (it's not a room service program because, Robinson says, many parents want to have input on what their children eat). A dining department hostess helps kids make their menu choices and then serves them their food.

Robinson himself walks the floors three times a week (usually with a tray or production line employee in tow “so they can see what the customers are like”) and gathers firsthand feedback.

His current duties take up a lot of time, but this visionary foodie is already preparing his wish list for the planned new Children's Memorial complex, and quickly running out of fingers as he ticks them off—“food court options, more ethnic foods, demonstration cooking, more make-to-order sandwiches— with the room to do that well—a grill where we can make panninis and other sandwiches— a carving station...mostly a lot more retail style food that isn't really possible in this facility,” he offers. “We don't have space or facilities to manage it here.”