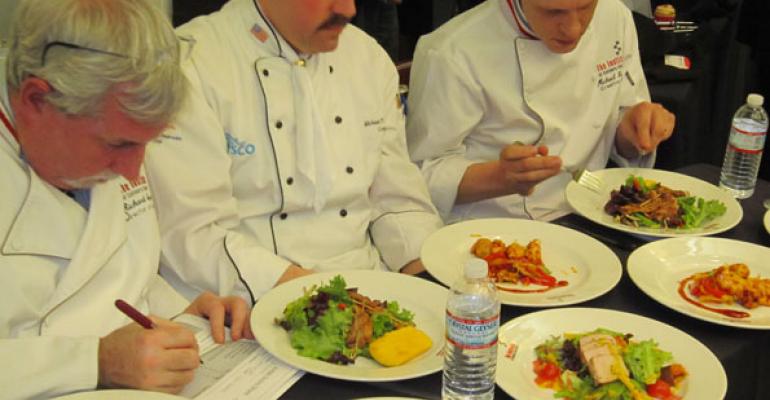 Big Challenge in the Big Apple

The mystery ingredient was pork loin, the time was set at 60 minutes, and the rules of engagement included creating a recipe fit for today’s food-savvy healthcare dining clientele and staying grounded in the missions of health and healing.

“The aroma of spices in the air, along with the excitement and anticipation at the event, tempered with humor under stress, sent the message that healthcare is ‘in it to win it,’” says Cecille P. Agustin, MS, RD, CDN, HFAA GNY board member and education committee chairperson, describing the event.

Barry Kriesberg, VP of Administration at Kingsbrook Jewish Medical Center, emceed the event, which took place at the Institute of Culinary Education (ICE), New York. The panel of three judges (ICE Chef Michael Laiskonis and ICE School Director Richard Simpson, and Chef Michael Salvatore of SYSCO) rated the teams not only on nutrition and culinary artistry, but also aspects of sanitation, teamwork and work flow—essential elements in real-life healthcare settings.

All teams prepared three dishes in the allotted time: an appetizer, a salad and an entrée. Each dish had to feature pork loin.

"Chefs Miriam, Ross and Hasan were able to pull from their best experiences and utilize pork loin featuring different cuisines," Williams says. "Even though there was only an hour to cook, the chefs were able to not only stuff one of the loins but also to make risotto."

Here are the winning world-flavor-inspired plates that the team created:

The winning team received a trophy, a knife set and a scholarship grant to attend the AHF National Conference in June in New Orleans.