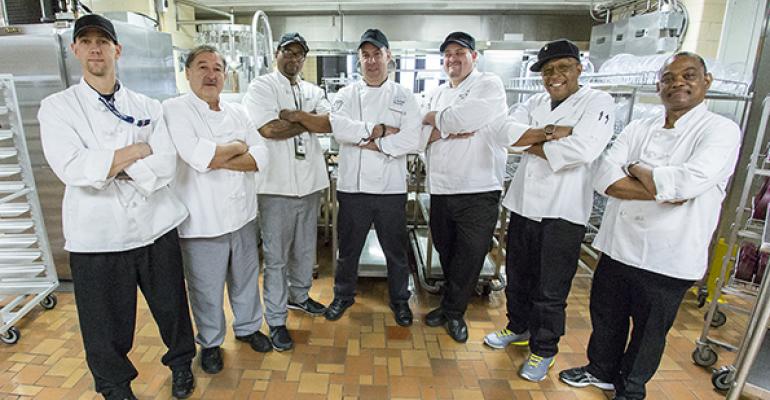 <p>TEAMWORK: Rex Healthcare&#39;s Black Hat Chefs worked side by side with the crew at the Denver VA Medical Center.</p>
News & Trends>Healthcare

Striving for higher patient satisfaction scores and better feedback on the taste and presentation of the food, Denver Veterans Affairs Medical Center (DVAMC) called on two North Carolina healthcare chefs who know about changing the culture of hospital food.

Krista Jablonski, food operations manager at DVAMC, knew she needed help getting the staff not just the skills but also the enthusiasm needed to accomplish the goal of food that’s incredibly good and also incredibly healthy.

That’s where the Black Hat Chefs came in. Led by Jim McGrody, director of culinary and nutrition services, and Ryan Conklin, CEC, executive chef, the Black Hat Chefs are the elite group of trained culinary professionals that have elevated the foodservice operation at Rex Healthcare, in Raleigh, N.C.

After a lot of communication and planning, McGrody, a veteran himself, and Conklin boarded a plane at the Raleigh-Durham International Airport and landed in Denver.

“This was a big deal for us,” McGrody says. “We’re not contractors or professional consultants looking to make money. We were just two passionate chefs on a journey to help a VA hospital make better food for our veterans.”

Once McGrody and Conklin were in the kitchen, getting the lay of the land and watching how plates were coming out, they immediately saw areas where they could help.

“We spent a lot of time working side by side. They needed some help, especially with plating,” McGrody says. “They were definitely cooks with good culinary skills; they just needed someone to push them. They knew what they wanted, but they didn’t know how to get there.”

Over the course of five days, McGrody and Conklin showed the VA hospital team how to get there, starting with fresh ingredients.

“It’s easier to open a bag of frozen squash and steam it, but we showed them what a difference it makes to use fresh and grill it,” McGrody says.

Other tips included using fresh herbs and roasted garlic to boost the flavor on the VA hospital’s ultra low-sodium menu.

“They realized that you can cook healthy and make it taste good,” says Leslie Miller, RD, food systems dietitian at DVAMC. “Hearing it from dietitians is one things, but it sunk in more to hear it from Jim and Ryan.”

“We told them, ‘We’re one of you guys,” McGrody says. “We cook in a hospital. We’re not dietitians, we’re chefs.’ We worked with them.”

Soon, the cooks were becoming more engaged, kitchen camaraderie was happening and the plates were coming out looking and tasting better than ever.

“We worked on plate presentations and we challenged them to come up with some ideas. They had a really good Chicken Alfredo made with purèed cauliflower, but the way there were plating it wasn’t great,” McGrody says. “It was mushy. So we showed them how to slice and fan out the chicken and garnish it with broccoli. They were like, ‘Wow, this is so much better already.’”

Another update was a very “institutional looking” hamburger, plated with the limp, steamed squash mentioned earlier.

“We said, ‘Why are you serving squash? That doesn’t make sense with a burger,’” McGrody says. “We showed them potato wedges with a little olive oil, garlic and fresh herbs. And the bun wasn’t even on the burger. It sounds simple, but it was amazing how much better it looked.”

The week culminated with a special dinner put on by the VA hospital team for a group of veterans who were hospitalized with post-traumatic stress disorder.

“The guys we met there were from every branch of service and ranged from Vietnam vets to the vets from Iraq and Afghanistan,” McGrody says. “It was such an honor to meet them, and to hear their stories.”

The veterans were served a meal that represented the new direction for the VA hospital’s foodservice team. It included tropical kale salad; grilled Tuscan chicken with sautéed spinach, fresh mozzarella and a roasted red bell pepper coulis; roasted asparagus with lemon, garlic and heirloom tomatoes; agua fresca with pineapple as the beverage; and a low-fat panna cotta with blueberry compote for dessert.

McGrody says the whole experience gave his Memorial Day this year a special meaning. “This is one of the coolest things I’ve done in awhile,” he says.

And the impression has lasted back at the DVAMC.

“They really learned a lot in terms of technique and plating, but they also got the teamwork going,” Jablonski says. “That’s one of the big things. It’s easier and it’s a better product when you have open communication. I’m so thankful they came here, and we’ve seen a dramatic change already.”