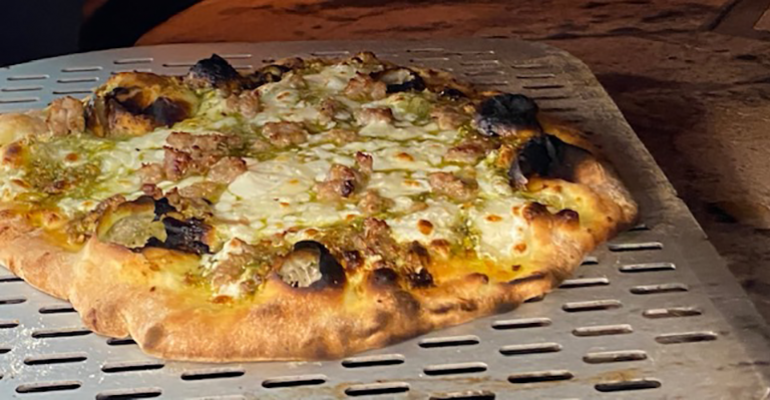 Photos: North Shore University Hospital
North Shore’s Marra Forni Brick Oven debuted just after the coronavirus crisis hit this past spring and has been turning out gourmet pies ever since.
News & Trends>Healthcare

A brick oven turning out fresh pizzas—including some ‘funky’ chef creations like cream of mushroom and corn elote—has become the most popular stop for diners in North Shore Hospital’s cafeteria.

The last five months have been stressful times for hospital staffs, but at North Shore University Hospital (NSUH) in Manhasset, N.Y., there has been at least one positive development to help take some of the stress off—fresh pizza made in a brick oven, just like in some of the most upscale Italian restaurants in nearby New York City. The Marra Forni Brick Oven debuted at NSUH just after the coronavirus crisis hit and has been turning out gourmet pies ever since.

“They started building it about a year ago and everything was finished around March, just when the whole COVID thing hit and we were contemplating whether we should open or not,” recalls Janisa Freycinet, executive chef at NSUH.

Related: United states of barbecue: How food service operators are smoking meat for customers during the pandemic 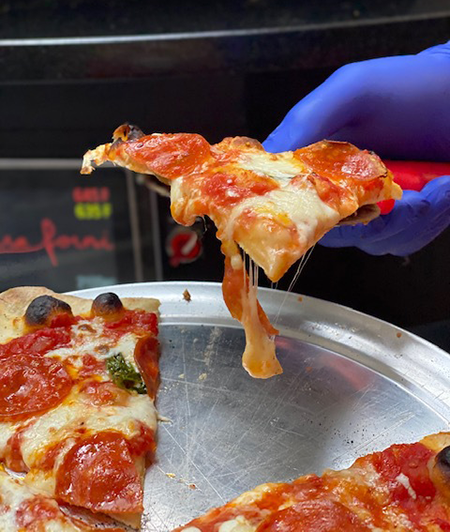 Gourmet pizzas are now a popular item in the North Shore University Hospital cafeteria, thanks to its new brick pizza oven station.

The dining staff decided they would do a “silent opening” meaning “we never announced it in the hospital, we just started making pizzas and whoever came we made pizzas [for them] and then did a formal ribbon cutting a couple weeks later and made it a big social media thing,” Freycinet says.

Related: 12 foodservices heroes who served customers, communities and colleagues during the coronavirus pandemic

The oven sits in a station in the hospital’s cafeteria that previously had been open space.

“In addition to the regular menu, we have two specialty pizzas every day like a pistachio pesto with Italian sausage and Buffalo chicken, and people can add two toppings. Every Tuesday and Friday, our chefs have a challenge where they come up with some funky recipes [for the specialty pizza of the day] like cream of mushroom pizza, corn elote pizza, pulled pork pizza and taco pizza,” she notes.

Of course, making gourmet pizzas takes some training, something the staff took seriously.

As part of their preparation, members of the culinary team—including Freycinet, a couple of the sous chefs and the cafeteria manager—took a trip into New York City to meet a master pizzaiolo, who took them through the process of making pizza in a brick oven. They then brought the knowledge back to the rest of the crew and worked with Kevin Dinh, a CIA alumnus who is the chef de partie of NSUH’s pizza kitchen, to instill it.

Since this took place several months before the brick oven was installed, the training had to do a workaround.

“We started training in the back of the [hospital] kitchen making the dough and getting that recipe down, then used the regular pizza oven to see the consistency that would come out,” Freycinet explains. “Once we had the recipes down, we were able to play around in the pizza kitchen when it opened up and we were ready to go.”

Previously, the only pizzas served at NSUH were premade pies that were finished off in the hospital kitchen.

Unfortunately for visitors, who are slowly being allowed back on the premises, the cafeteria remains closed to them, so the gourmet pizza is available only to staff, who are certainly keeping the oven busy. Freycinet says the station sells about 250 pizzas a day on average at the lunch and dinner meal periods, with service also about to be extended to overnight staff.

Ways to extend the product to patients and to catering are currently being worked out, she adds.