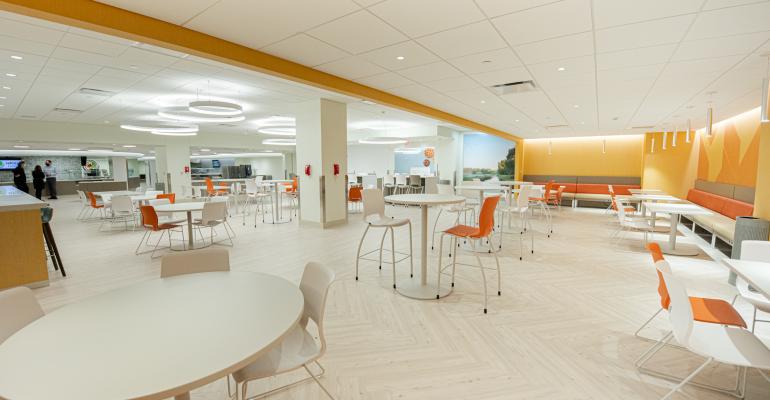 Carle Hospital's Cafeteria Gets a "ReFresh"

The newly remodeled space seeks to be a relaxing spot for scratch-made fare.

Carle Foundation Hospital's new state-of-the-art cafeteria has been in the making for three years. Now it's finally open - and ready to show how good eating at a healthcare facility can be.

"We're really trying to change what people think about when they think about hospital food," says Kevin Steffes, Director of Food Services for the Urbana, Illinois hospital. "We wanted a space where patients, visitors, and staff could come in and get away and refresh, and that's how the name got tied in as well."

The 25,000-square foot facility underwent a total remodel. Designed to be warm and inviting, the bright, open dining area features natural imagery to draw guests in and encourage them to relax. "You can forget about the rest of your day. You can almost find your zen," says Steffes.

The kitchen space got a makeover too, allowing ReFresh to offer more wholesome, minimally processed fare. "We've focused on freshness of ingredients and doing more things in-house than we used to," Steffes said. Now, for instance, the cafeteria is able to serve three different soups each week that are made entirely from scratch.

Fresh and flavorful is the guiding theme for all of ReFresh's menu offerings. The cafeteria's entree station features a dedicated heart-healthy entree like broiled fish with chermoula sauce, Asian glazed boneless chicken thighs with whole wheat stir-fry noodles, and turkey taco-stuffed avocado halves. "They're all very flavorful and are presented attractively," says Steffes. They're also priced lower than other entrees on the menu to entice customers to give the healthier choice a try. "We want the heart-healthy item to be the most attractive thing we're offering."

Plant-based meals, too, have become more prominent. Many of the heart-healthy entrees are meatless, such as the farmer's market enchiladas filled with black beans, potatoes, and squash and topped with a from-scratch enchilada sauce. A manned salad bar station serves up two new composed salads with house-made dressings each week, while also giving customers the opportunity to build their own salads.

ReFresh isn't solely focused on better-for-you offerings though - the menu is designed to appeal to a wide crowd. "I don't imagine in the heart of the Midwest that there aren't people looking for a cheeseburger, and we have that available," says Steffes. But like the rest of ReFresh's food, Steffes wanted the burgers to be exceptional. "We decided to do fresh, never-frozen burger patties and make smash burgers to order," he says. They're hugely popular, with the cafeteria typically selling around 300 per day.

In between these two extremes sit plenty of other offerings. The chef station features a weekly rotating cuisine, which has proven to be a big hit. "The first week we opened we had the Mexican station and people really went crazy for the burrito bowls," says Steffes. "We're also trying to do interesting things with pressed sandwiches and fancy grilled cheeses." A deli station has made-to-order subs and sandwiches, while a Sally the Robot unit stands by to make quick, custom salads even when the manned salad station is closed. (Sally, along with the grill station, are among the late-night offerings that customers can access until closing time at 2:00am.)

Steffes realizes he's been lucky to find adequate staff to helm ReFresh's many stations amid the ongoing labor shortage. And he's trying to manage his manpower intelligently. "We're trying to figure out what the most popular stations are or rotate through them sometimes. The entree station might close down at 3:00, but the deli and salads and grill can still be open," he says. "We're repurposing labor to maximize the offerings."

About three-quarters of ReFresh customers are hospital staff, for now. Though Carle's COVID restrictions are easing, the hospital isn't yet fully open to the public. "If we get to a place where there are relaxed standards for visiting, I'd love for more people to come down here, including folks off the street," Steffes says.

Steffes has other hopes for the future of ReFresh too. He'd love to create a secret menu that's only available on the cafeteria's mobile ordering platform as a way to steer more customers towards using the app. And he hopes to borrow from the pop-up ghost kitchen trend to create more novel offerings. "If I have a great Mexican station once a week, what about doing Taco Tuesday kits for people to take home?" he says. "As we think about what people are looking for, it's convenience. We learned a lot about that from the pandemic."