At St. Andrews Estates-North, a 310-resident  retirement community in Boca Raton, Culinary and Nutrition Services Director Virginia Ohanian has turned to a strategy employed by some of the nation’s top retail merchants to add variety to the lives and mealtimes of the CCRC’s resident community.

Beginning in June, she began opening a “Pop-Up” restaurant one week each month that creates the sights, sounds, ambiance, service and menu of a different world cuisine in a formal dining area on the St. Andrews campus.
“We re-configure and decorate the tables and room, pipe in themed music and create a full menu based on the country and cuisine of the month,” she says.
The pop-up Italian menu featured Primi Appetizers, Insalata, Zuppa, Specialta (House Specialties) and Contorni (side dishes), with a selection of entrees and other items that would be at home in any intimate Italian restaurant.
Residents have to sign up for the program in advance, but can sign up for as many of the six days as they want, she says. Meal selections do not have to be made in advance, “but a surprising number of residents will sign up for all six days so they can try everything on the menu,” Ohanian says. 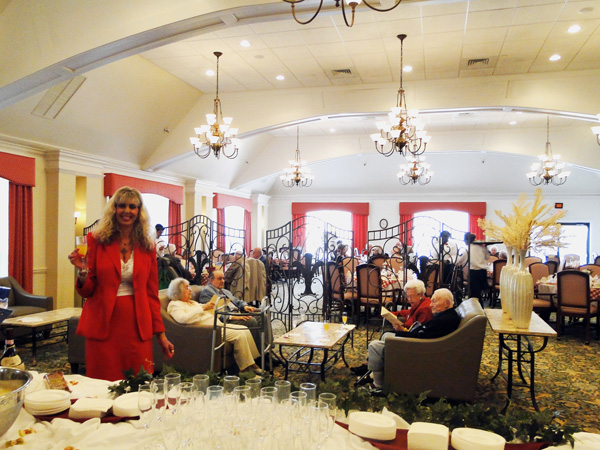 An expansion of the CCRC’s “Dine-Around-the-World” program, the new initiative will move from Italy, to France, Japan and other global cuisines over the year. The option prove attractive enough that a number of residents from St. Andrews South—across the lake—arranged to visit the North campus to take advantage of it.
The secret to making Ohanian’s pop-ups a success? “Paying attention to all of the small details,” she believes. “At our Italian restaurant, we offered them Bellinis with peach nectar and zest of lemon, served at tableside in champagne glasses. We put olive oil with herbs and Italian bread on the tables, grated romano cheese to order at tableside and served Pelligrno water and Chianti for those who wanted wine.”
St. Andrews is one of 23 retirement life communities that ACTS operates up and down the eastern seaboard. One of the largest CCRC organizations in the country, “it has been “very progressive with culture change,” Ohanian says. “Eldercare is not prescriptive the way it once was. Residents get up when they want to and eat when they want to.” The Boca Raton facility has a number of dining venues, ranging from formal to casual to convenience options.
St. Andrews’ basic contract with independent living residents entitles them to one meal a day, every day, whether it is breakfast, lunch or dinner. Additional meals are billed at $5 each, regardless of the daypart. St. Andrews has both a North and a South campus (on either sides of a lake), and  is currently restructuring to offer a single campus option to the region. Both facilities have just completed very significant renovations in preparation for the consolidation.
“We want to increase resident choice across the operation,” says Ohanian. "That extends not only to the independent component but also to assisted living and skilled nursing operations, where we will also be offering tableside service in the new dining rooms.”
0 comments
Hide comments
Recommended Reading